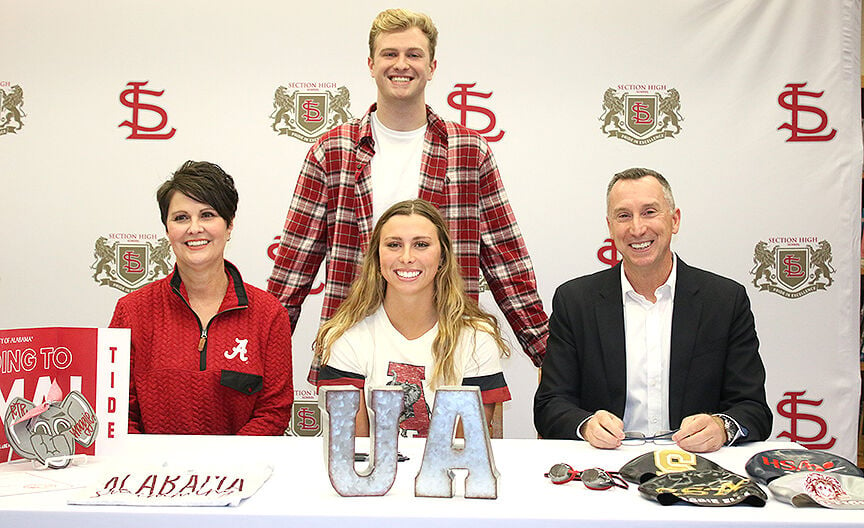 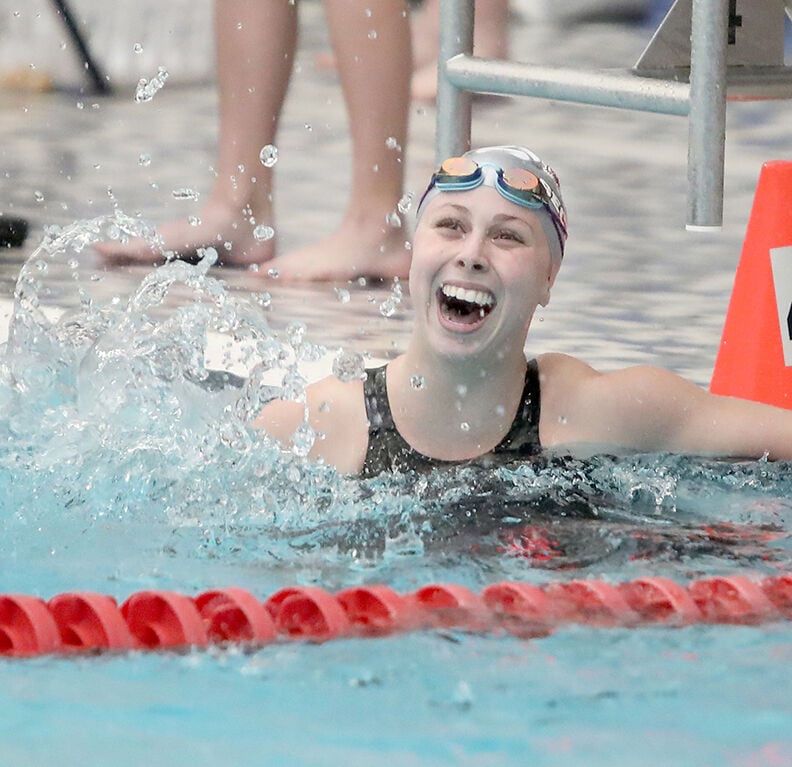 Section swimmer Maggie Ella Robbins signs her national letter of intent to swim collegiately at the University of Alabama.

Section state champion swimming Maggie Ella Robbins was mulling several college offers when got the phone call she had been waiting for.

Robbins answered the phone call from Alabama swimming coaches and heard the words she hope to hear.

“They offered me over the phone and I took it,” Robbins said. “That was the place I wanted to go. I’d I told my parents that if they gave me an offer, I wanted to take it. I was so excited.”

Robbins made it official on Wednesday, going from Alabama commit to Alabama signee by inking her national letter of intent with the Crimson Tide in front of family, friends, coaches, teammates and training partners during a ceremony at Section High School on the opening day of the NCAA’s 2021-22 Early Signing Period.

“I loved Alabama (when I visited),” Robbins said. “I just really loved the people there and the coaches really made me feel at home. I’m very excited that I get to swim for my state.”

Robbins grew up swimming for the Scottsboro Swimming Association and for other club level teams before Section began its swimming program at the AHSAA level in 2020. Since, Robbins put Section on the map in swimming and also put the sport on the map in the Section community, becoming the face of the sport in Section.

“I think swimming is a really cool sport,” Robbins said, “so I’m glad I got to bring it to Section. Hopefully it’ll grow after I leave and hopefully I made an impact.”

Robbins has yet to not finish first in a race during her two seasons swimming for Section. In 2020, Robbins won the Class 1A-5A 50-year Freestyle and the 100-yard Butterfly state championships and has continued to be dominant again this season as the high school swimming season’s postseason beginning in a few weeks.

At Alabama, coaches project Robbins to swim the 50- and 100-yard Freestyle races.

Robbins, who plans to major in Exercise Physiology and possible pursue a career in psychology/sports psychology, said finalizing her college plans allows her to focus on the rest of season without the worries of her future plans.

“Basically when I committed it was a weight was off my chest,” Robbins said. “So signing, now I know it’s just sectionals, state and focus on the rest of the year because it’s a pretty big year for me. I’m just practicing for sectionals and state. Whatever happens happens, but I would love to win state again and swim some best times. Winning state again is a big goal.”

Robbins’ signing was a historical moment for Section High School. Despite its history of athletic success, the school has never had a Division I signee in any sport until Robbins did so on Wednesday.

“I’ve just always worked hard because I wanted to go D-I ever since I thought I could swim in college,” Robbins said. “Swimming in college is swimming in college, but (D-1) was a big goal for me. I hope I can impact others to think they can do the same coming out of Section.”