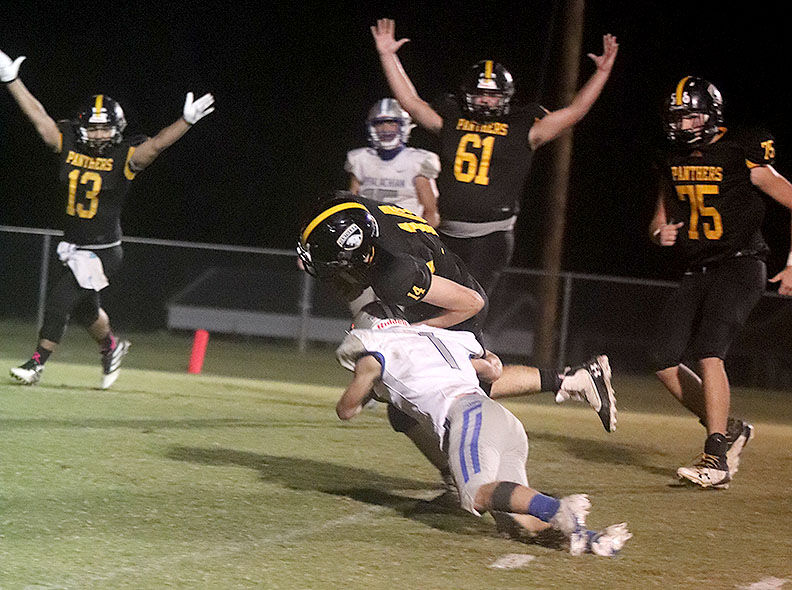 Brice Thompson (14) crosses the goal line for an interception return for a touchdown as teammates Carlos Torres (13), Nathan Gardner (61) and Justice Archer (75) celebrate during Woodville's 54-20 win over Appalachian Friday night. 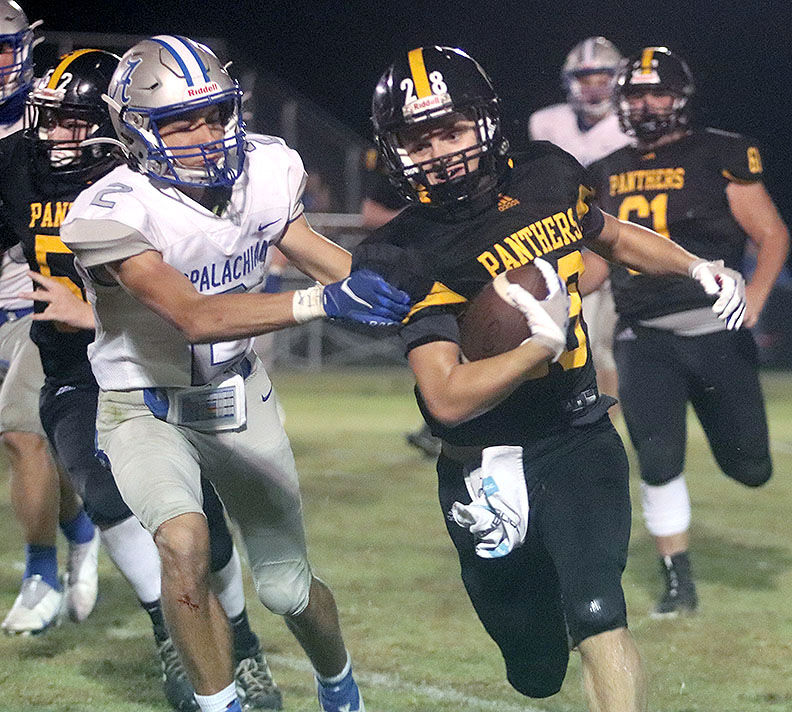 Brice Thompson (14) crosses the goal line for an interception return for a touchdown as teammates Carlos Torres (13), Nathan Gardner (61) and Justice Archer (75) celebrate during Woodville's 54-20 win over Appalachian Friday night.

Entering the final week of Class 1A Region 7 play, the Woodville football team had a chance to make history with a win over Appalachian.

The Panthers did not let that opportunity go to waste.

Woodville built a 10-point halftime lead and then outscored the visiting Eagles 24-0 in the second half to post a 54-20 Homecoming victory Friday night at Frazier Field.

The victory also secured Woodville a winning record in region play for the first time since the program began in 2006.

“I talked about that to our guys Monday and they were excited about the opportunity to make some history. It was a little extra motivation,” said Woodville head coach Tyler Vann.

Aside from some early defensive struggles, Vann called the Friday’s performance a “complete win.”

“The defense, from early second-quarter on, really played well,” he said. “The defense got it going and the offense kept rolling.”

Jackson Peek ran for 255 yards and five touchdowns for the Panthers while Cam Talley ran for 102 yards, Josh Thompson ran for 61 and Carlos Torres ran for 21.Torres also had 11 tackles and two quarterback sacks.

Leading 30-20 at halftime, Woodville wasted no time adding to its lead. Peek scored on a 42-yard touchdown run just 36 seconds in the third quarter, and Cam Talley jogged in untouched for the two-point conversion to make it 38-20.

The next Woodville score was a defensive one, as Brice Thompson intercepted an Appalachian (1-8, 1-5) pass and returned it 4 yards for a score. Talley again ran for two to push the Panthers in front 46-20 late in the third quarter. Thompson had two interceptions in the game.

Woodville capped the scoring with 10:41 remaining in the fourth quarter on Torres’ 10-yard touchdown run and Thompson’s two-point conversion run.

“It was a good win for our guys,” Vann said. “These last two weeks have been really good. Hopefully we keep it up next week (against Section) and then in the playoffs.”