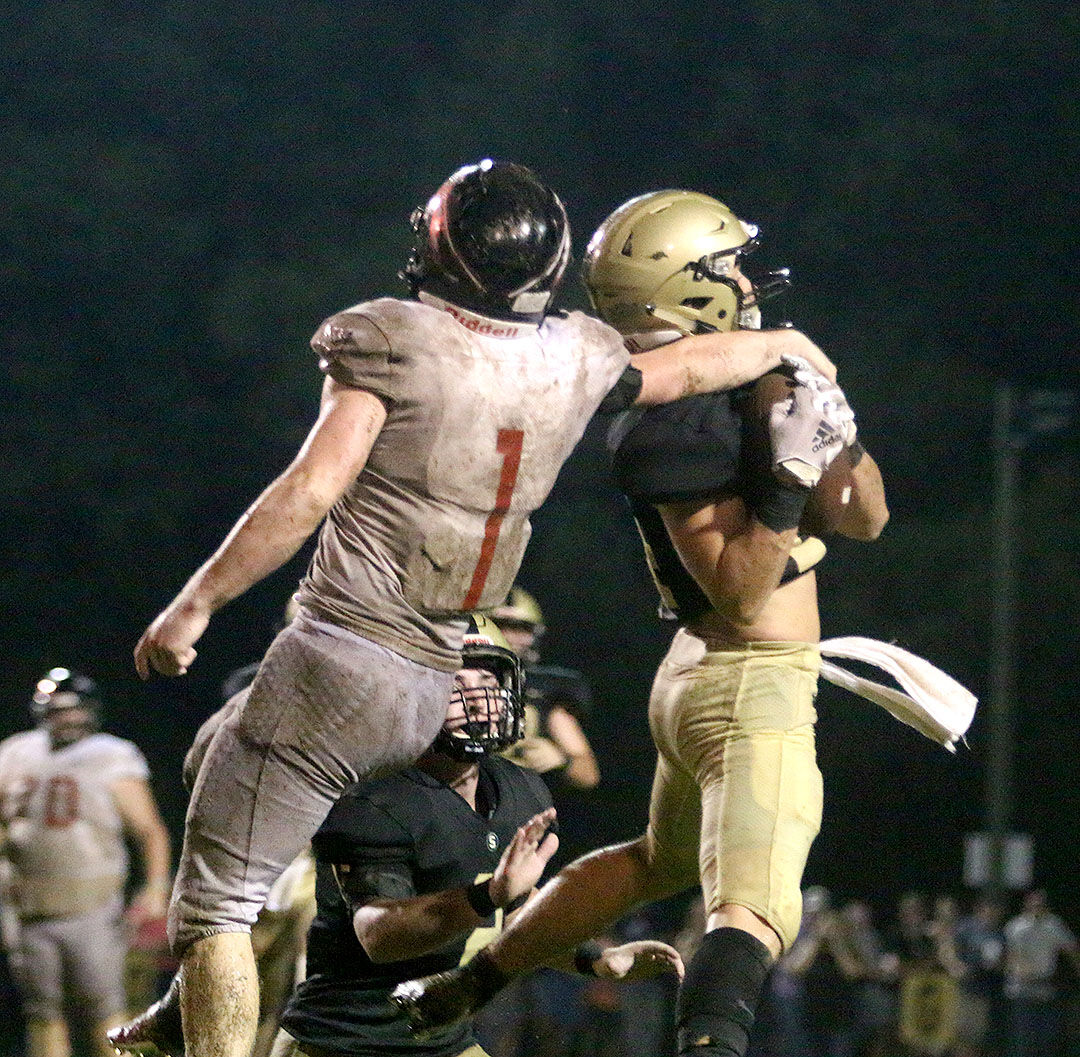 Scottsboro's Thomas Stewart (Right) intercepts a pass intended for North Jackson's Macklin Guess late in the fourth quarter of Scottsboro's 16-12 comeback win in the Battle of the Valley. 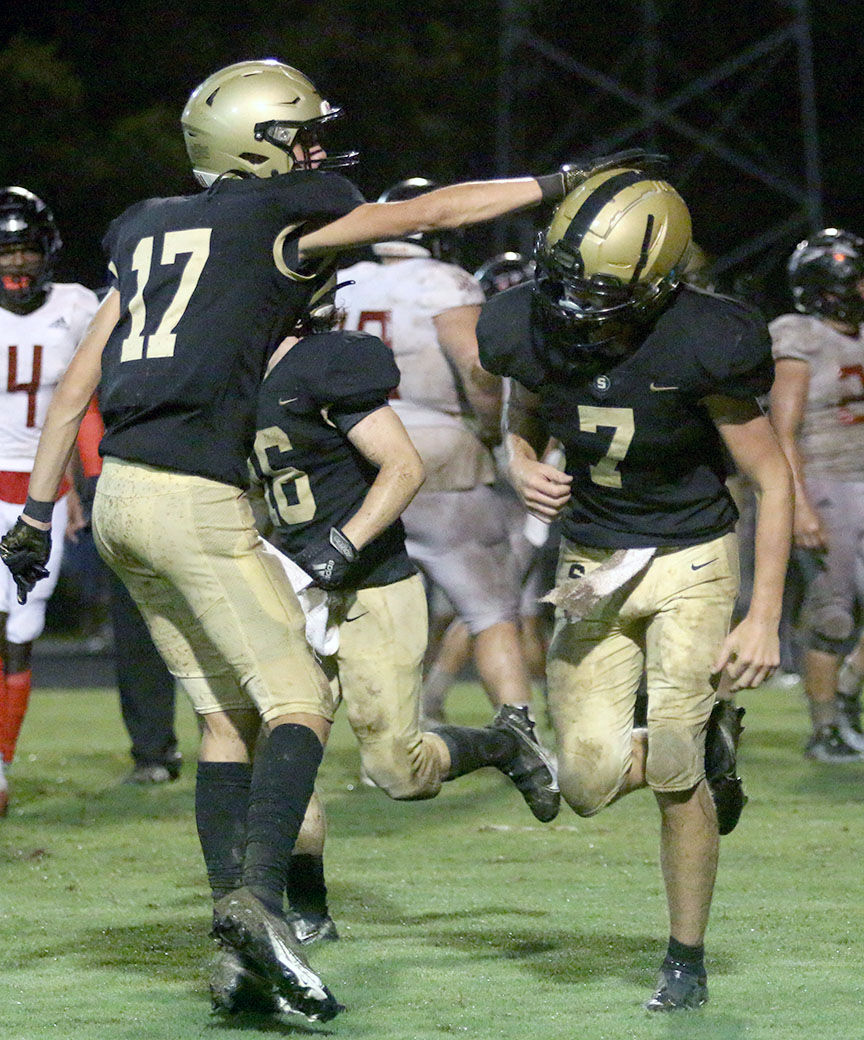 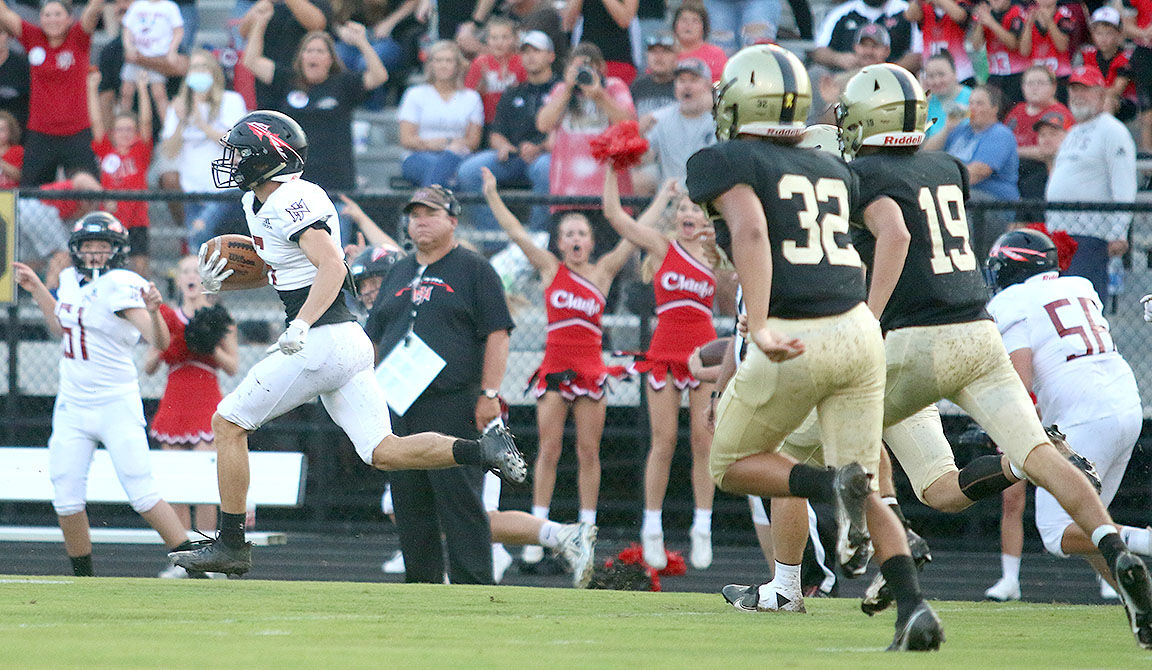 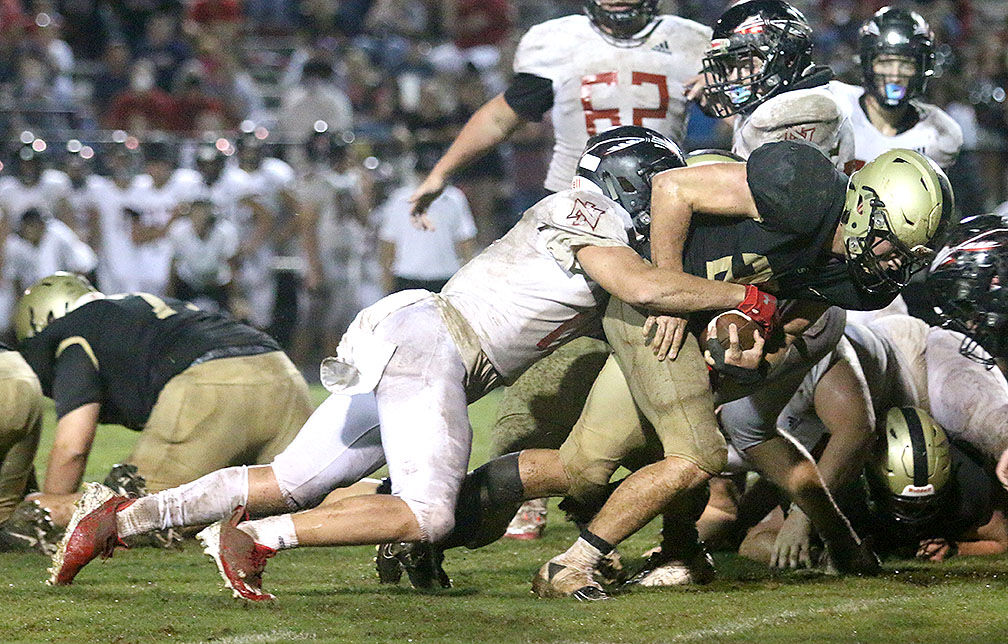 Scottsboro fullback Landon Grider struggles for extra yardage as North Jackson linebacker Preston Miller tries to make the stop during the teams' season-opening matchup in the 34th annual Battle of the Valley Friday night at Trammell Stadium. Scottsboro used a fourth-quarter touchdown to edge the Chiefs 16-12. 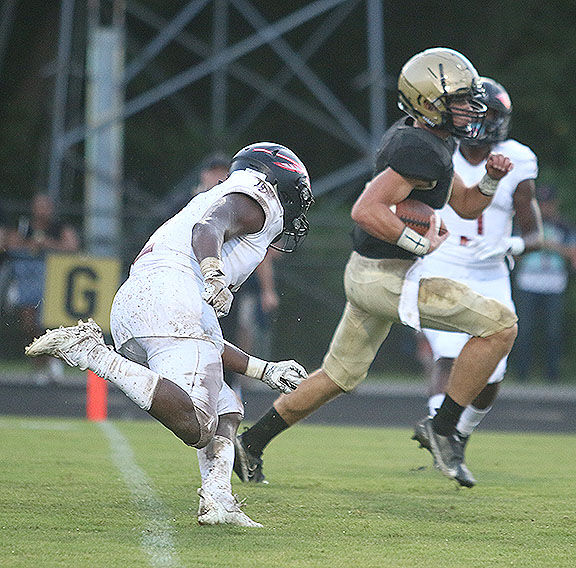 Scottsboro's Thomas Stewart (Right) intercepts a pass intended for North Jackson's Macklin Guess late in the fourth quarter of Scottsboro's 16-12 comeback win in the Battle of the Valley.

Scottsboro fullback Landon Grider struggles for extra yardage as North Jackson linebacker Preston Miller tries to make the stop during the teams' season-opening matchup in the 34th annual Battle of the Valley Friday night at Trammell Stadium. Scottsboro used a fourth-quarter touchdown to edge the Chiefs 16-12.

“It’s for everything we do, but certainly with the style of offense (triple option) we do,” Bell said. “It just goes back to you’ve got to swing that hammer, you’ve got to pound that rock. It may not show a whole lot of progress, but as long as you chip away at it, that thing will bust.”

Freshman Jake Jones, on in relief of injured senior starting quarterback Gavin McCrary, scored the game-winning touchdown and Thomas Stewart came up with game-clinching interception as Scottsboro posted a 16-12 win over North Jackson in the 34th annual Battle of the Valley Friday night at Trammell Stadium in Scottsboro.

It was the Wildcats’ third straight win in the series and seventh in the last nine meetings, cutting North Jackson’s all-time series lead to 21-13. Scottsboro has now won five straight home games against the Chiefs, whose last win at Trammell Stadium came in 2011.

Scottsboro wore gold helmets in Friday’s game for the first time since 1979, and the game resembled a game of that era.

“It was a good old-fashioned (style) football game, just exactly what we expected,” said North Jackson head coach Joe Hollis, Jr. “I thought our kids played with a lot of heart, played very physical. I thought our defense played exceptional. (Defensive coordinator Kyle) Crabtree and the rest of the defensive staff did a great job getting our guys ready for this. I’ve got to do a better job as a head coach and calling a better game and putting our kids in a better situation to be successful. I’m super proud of this group. They fought the rear-ends off and did everything we asked them to do. We just have to learn from it and move on to the next one. We’ll get back to work and grind every day and be ready in two weeks (for Westminster Christian).”

Scottsboro (1-0) held North Jackson to just 1 yard rushing on 22 carries and 64 yards on 3-of-9 passing. Neither of the Chiefs’ touchdowns came on offense.

“Our defense played its tail off,” Bell said, “kept us in the game while we struggled offensively.”

Scottsboro countered with nine-play, 58-yard scoring drive, taking a 7-6 lead on Gavin McCrary’s 8-yard touchdown run and Teruya Isozaki’s PAT. The Wildcats then got a safety after North Jackson snapped the ball into the end zone and appeared to reach the end zone on a McCrary-to-Thomas Rackler 49-yard touchdown pass, but a penalty negated the score.

Both teams were hampered by penalties, with the Chiefs penalized 12 times for 118 yards and Scottsboro seven times for 45 yards.

North Jackson then moved back in front 12-9 midway through the second quarter when Macklin Guess returned a Scottsboro fumble 55 yards for a touchdown.

The Chiefs had another scoring opportunity late in the first half, but a drive just before halftime ended on downs at the Scottsboro 14-yard line.

North Jackson’s lead held up until late in the fourth, when penalties backed them up deep in their own territory and a short punt gave Scottsboro the football at the Chiefs’ 35-yard line. Nine plays later, Jones raced in from 6 yards out and Isozaki added the PAT to give the Wildcats a 16-12 lead.

“Really proud of Jake,” Bell said. “ A ninth-grader in a ball game like this. That’s a lot to ask. Someone asked me the other day if something happened to Gavin do I trust Jake Jones, and the answer is ‘yes I trust Jake Jones.’ When Jake first got in there, Jake acted like a freshman. I challenged him on the sideline. He settled down. On the touchdown drive, he engineered it perfectly, pulled it at the right time (on the touchdown run). He grew up a lot in the fourth quarter when we needed him to.”

On the first play of North Jackson’s ensuing possession, Scottsboro’s Thomas Stewart intercepted and under-thrown pass on the Chiefs’ halfback pass try, and the Wildcats were able to run the remaining time off the clock to seal the win.

“We told the players it would be a four-quarter ball game,” Bell said. “I thought (North Jackson’s) kids play hard. I thought our kids played hard, we just didn’t play well. Ugly win is a heck of a lot better than an ugly loss, that’s for sure.”

› Greg Bell of WWIC RADIO 1050 AM contributed to this report.