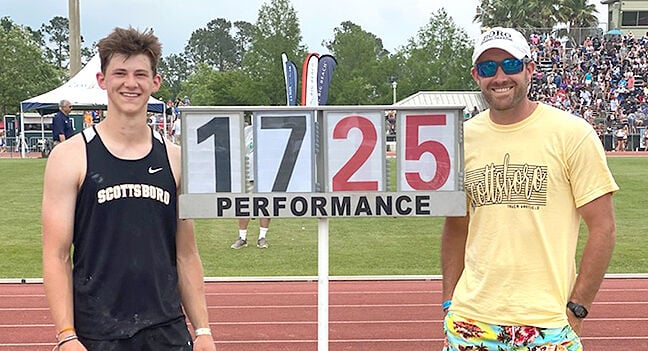 Scottsboro's Maddox Hamm (left), pictured with Robinson, won the Class 6A Boys pole vault state championship with a state record mark of 17-0.25 at the Class 6A state meet in Gulf Shores.

Scottsboro's Maddox Hamm (left), pictured with Robinson, won the Class 6A Boys pole vault state championship with a state record mark of 17-0.25 at the Class 6A state meet in Gulf Shores.

The Scottsboro varsity boys track and field team enjoyed a state-title winning and record-setting weekend at the AHSAA Class 6A Boys Track and Field Championships.

“We kind of knew where we sat. We threw every dart we had for a bullseye, (but) Opelika just had more darts to throw,” said Scottsboro head coach Luke Robinson. “But there wasn’t anyone of our guys that should be upset with their performance. They all did everything they could. The best thing about all of it, is everyone down there didn’t care about their own individual accomplishments or accolades. they wanted Scottsboro to do well first and foremost.”

“We all knew he had it in him,” Robinson said. “But he didn’t really care. Every time he broke a record, he’d ask me about where we were in team points. He could’ve broken nine minutes in the 3200, but he saw he was way ahead and he saved some gas for the 4x800 and 800 (races) because he knew we needed the points from those.”

Atkins also teamed up with his twin brother Benson, Hayden Judge and Rex Green on a record-setting run to a state championship in the 4x800. They posted a record time of 7:45.74, which is also the second-fastest time recorded nationwide this season.

Sophomore Maddox Hamm won his second pole vault state championship, winning the Class 6A Boys title after winning the 5A Boys title back in 2019. Hamm set a new state record of 17-0.25 in winning the 6A crown.

“Maddox barely missed clearing 17-7, which at the point he was just worn out, had ripped a callous off his hand, because he’d already vaulted a dozen times,” Robinson said. “He came in early around 14-6 because we wanted to make sure we got the points, and after he won, then we’d play. He did great. Project 18 (feet) has begun.”

Overall, Scottsboro had 12 Top-10 finishes in the state meet.

Robinson thanked his seniors for a memorable season and memorable careers.

“I’ve told them a lot of times, but I don’t think they realize just how much of an impact they’ve had on our success. The team success always came first with them,” he said. “I’ve really enjoyed coaching them.”

Freshman Caroline Sanders had Scottsboro’s best finish, just missing the medal stand with a fourth-place finish in the long jump with personal-record mark of 17 feet, 6 inches. She also finished 10th in the triple jump (33-7) and 16th in the high jump (4-8).

“Caroline Sanders had a great weekend,” Robinson said. “For a freshman to PR by a foot (in the long jump) in the state meet, that shows there’s big things to come.”