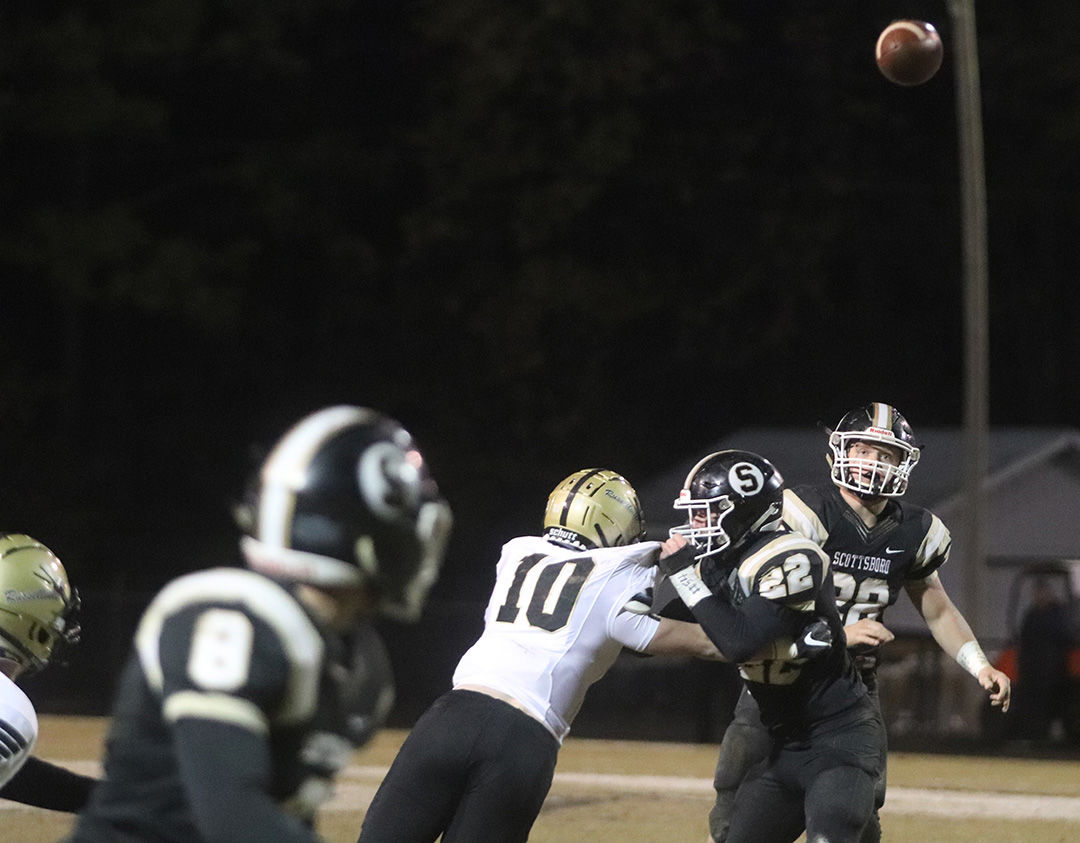 Jacob Manning (far back right) throws a touchdown pass to Brandon Cloud (second from front left) during Scottsboro's 17-14 victory over Russellville in the first round of the 2019 Class 5A playoffs. 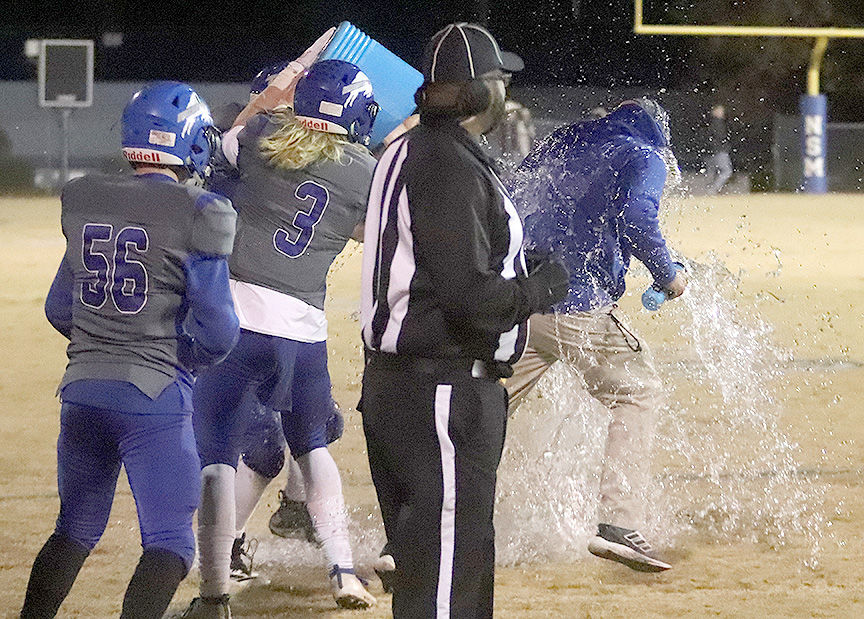 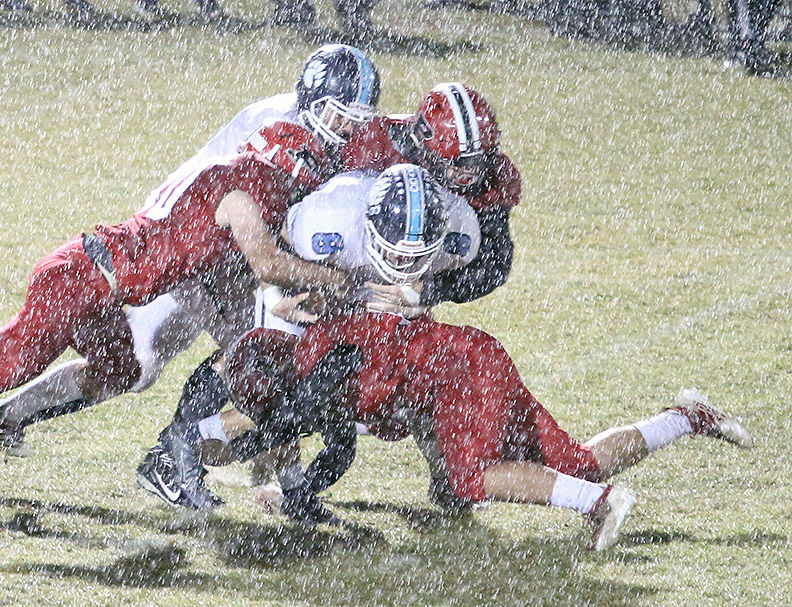 Jacob Manning (far back right) throws a touchdown pass to Brandon Cloud (second from front left) during Scottsboro's 17-14 victory over Russellville in the first round of the 2019 Class 5A playoffs.

Scottsboro — The Wildcats opened the 2019 with some questions that got answered quickly early in the season.

After a season-opening loss to Fort Payne and a region win at Ardmore, Scottsboro thrashed Guntersville 42-14 in Week 3 and took off from there. After defeating East Limestone on the road and getting coach Don Jacobs’ 100th career coaching win in a 33-0 victory over North Jackson, Scottsboro rebounded from a loss to eventual region champion Madison County to defeat Arab, Madison Academy and Brewer — Scottsboro did not allow a first down in a 35-0 win in which Brewer finished with zero total yards — to secure the region’s No. 2 seed. Scottsboro defeated 6A Hartselle 10-7 to end the regular season before posting a 17-14 Class 5A first-round playoff win over Russellville. Scottsboro’s season came to an end with a 26-10 second-round loss at Center Point, but the Wildcats’ nine wins were the second most for a Scottsboro team in the past 15 seasons.

North Jackson — It was a season of change for the Chiefs, a team that entered the season with widespread starters to replace and a new coaching that was installing new offensive and defensive systems.

The Chiefs also suffered four losses by a combined eight points, including three one-point losses to Plainview 36-35 in overtime to Plainview and playoff teams St. John Paul II 49-48 and Priceville 37-36.

The Chiefs’ new offense did show signs of things to come, producing 30.4 points per game. The quarterback tandem of sophomore Dalton Morris (1,332 yards and 12 touchdowns) and senior Carter Gass (644 yards and seven TDs) passed for nearly 2,000 yards and 19 TDs while junior running back Johnny Gilliam had 1,307 rushing yards, 396 receiving yards on 21 catches and 20 total TDs.

Pisgah — Coach Luke Pruitt’s second Pisgah team started the season with strong performances in wins over Woodville and Brindlee Mountain before enduring a tough stretch at midseason, losing five of six games. But in a must-win situation in Week 9 that would force a three-way tie for Class 3A Region 7’s fourth and final playoff spot, Pisgah defeated visiting Plainview 12-8 — the Eagles have now won two straight against the Bears after losing 24 in a row in the series — in driving rains to force the tiebreaker with Plainview and New Hope.

Pisgah would eventually win that tiebreaker and clinch a second straight playoff berth, a program first since making three straight playoff appearances from 2009-10. The Eagles fell at Region 8 champion Westminster Christian 47-28 in the first round of the Class 3A playoffs.

NSM — The Bison put a bow on the winningest decade in North Sand Mountain football history (NSM went 69-43 from 2010-19) with a history-making season.

NSM opened the season with its third straight win over out-of-state rival Dade County of nearby Trenton, Georgia before winning six of their next nine games against Asbury, Sand Rock, Cedar Bluff, Ider, Section and Pisgah while suffering losses to eventual state champion Fyffe, Class 2A state semifinalist Collinsville and 3A Sylvania.

Coach Keith Kirby’s Bison opened the postseason with a 20-13 win at No. 6-ranked Addison to post the program’s fourth all-time playoff win. In Round 2, NSM rolled past visiting Westbrook Christian 35-13 to advance to the state quarterfinals for first time in school history. The Bison traveled to Collinsville for the second time — NSM lost at Collinsville 54-28 on Sept. 6 — and nearly scored the upset of the No. 3-ranked Panthers before a late defensive touchdown allowed Collinsville to secure a 30-21 win.

NSM quarterback Landon Green, who was 130-of-207 passing for 2,325 yards and 30 touchdowns while adding 402 rushing yards and 10 scores, was named second-team all-state.

The Bison’s leading receiver, junior Lake Bell, was a second-team all-state selections after catching 44 passes for 777 yards and two TDs.

Section — The Lions went to work under a new head coach Chris Hammon, a longtime assistant coach at Valley Head and Scottsboro, during the 2019 season.

The Lions opened with losses to 3A New Hope and eventual state champion Fyffe before notching Hammon’s first win as Section coach with a 12-0 victory at Class 2A Region 8 foe Ider.

Section went on to finish 3-7, carrying momentum into the offseason after notching wins over Asbury 35-0 and Woodville 28-14 over the final three weeks of the 2019 campaign.

Woodville — The Panthers returned to the Class 1A playoffs for the fourth time in five seasons thanks to a late-season surge.

Woodville started 2-4 and before a thrilling 30-28 overtime win over R.A. Hubbard — Jackson Peek threw the game-winning two-point conversion to Da’Vion Johnson after a bad snap as Woodville tried to kick the PAT — to put the coach Jay Powell’s Panthers in playoff contention. A week later, Woodville essentially clinched that playoff berth by winning a wild 71-56 contest at Coosa Christian in a game that is the eighth-highest scoring game in AHSAA history.  Woodville’s season ended with a 63-7 loss to eventual Class 1A state runner-up Mars Hill Bible.

Peek, the Panthers’ junior quarterback, was named the Jackson County Offensive MVP after rushing for 1,170 yards and 17 touchdowns while completing 21 of 60 passes for 402 yards and seven TDs.