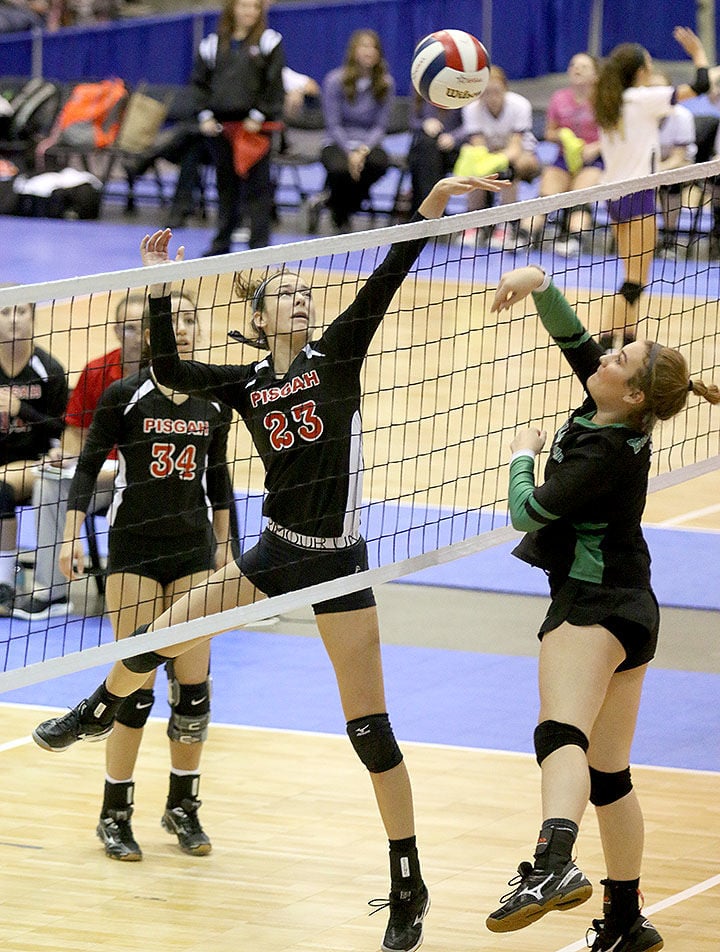 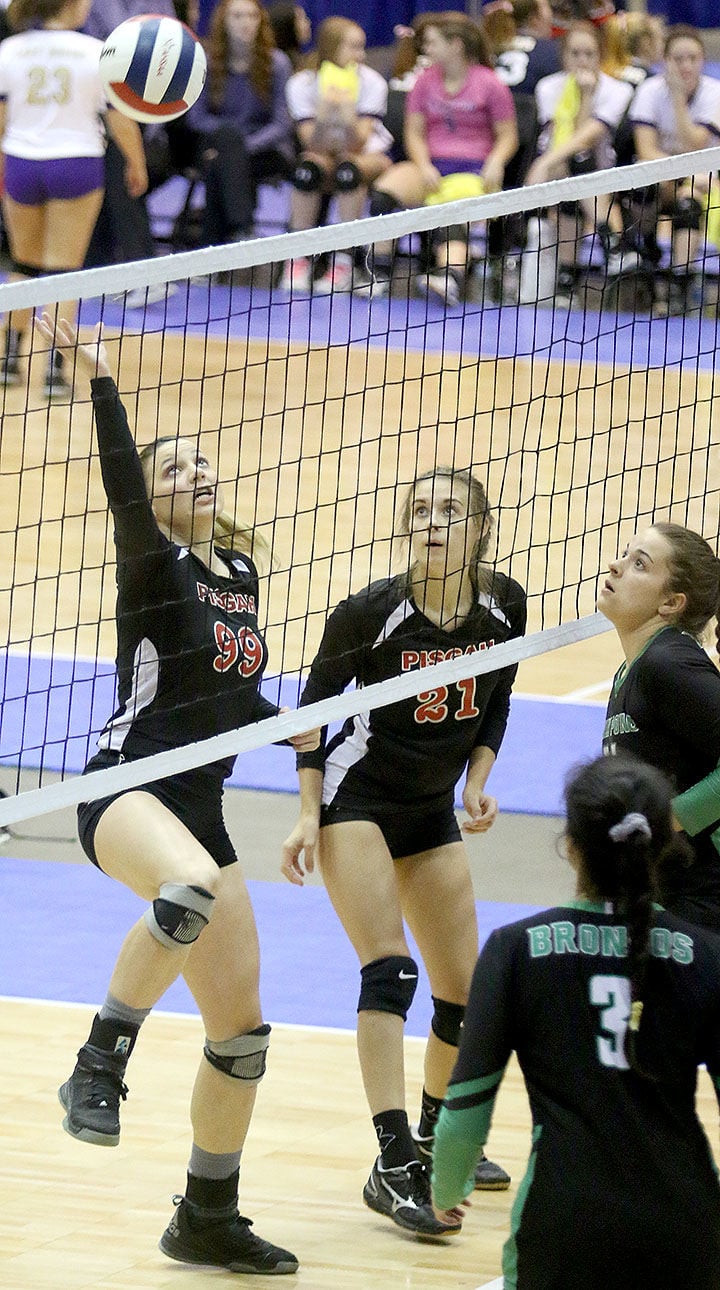 Annie Hughes (99) keeps a point alive as teammate Kacie McLaughlin looks on during Pisgah's match with Holly Pond in the Class 3A North Super Regional Thursday at the Von Braun Center in Huntsville. 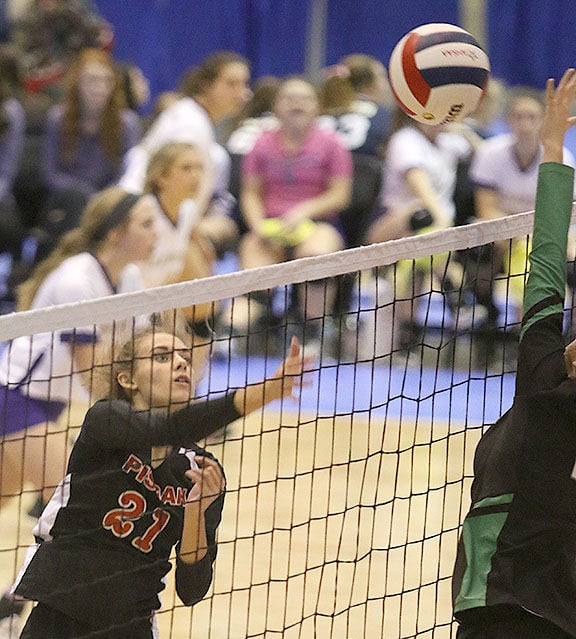 Pisgah's Kacie McLaughlin hits past a Holly Pond defender at the net. 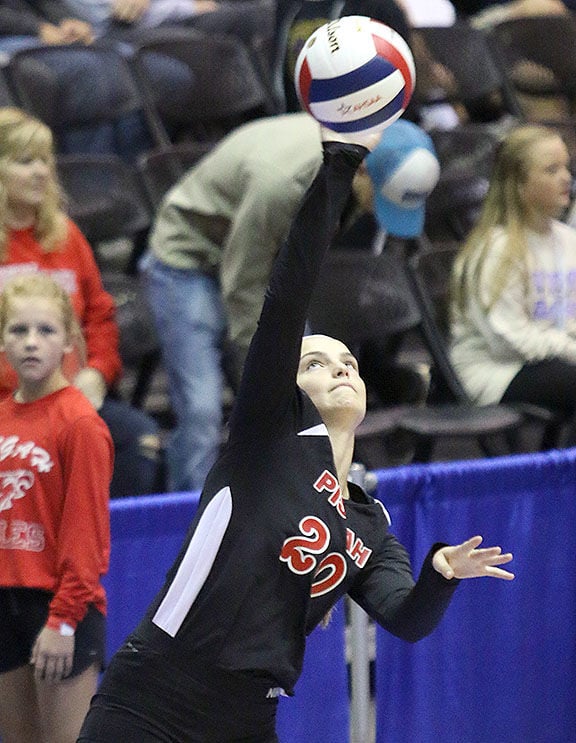 Annie Hughes (99) keeps a point alive as teammate Kacie McLaughlin looks on during Pisgah's match with Holly Pond in the Class 3A North Super Regional Thursday at the Von Braun Center in Huntsville.

Pisgah's Kacie McLaughlin hits past a Holly Pond defender at the net.

After losing the first two games, Pisgah rallied to tie the match at 2-all and force a decisive fifth game against Holly Pond in the first round of the Class 3A North Super Regional at the Von Braun Center’s South Hall in Huntsville. But Holly Pond scored Game 5’s final two points to win 16-14 and take the match three games to two.

We were just inches away from winning. But I thought [the players] did a good job,” said Pisgah head coach Cary Ellison.

“I’m proud of them for fighting back. Had a chance to lay down, but didn’t. Kept playing, really played with an attitude in the third and fourth games. The fifth game, we just couldn’t keep the momentum. We just needed to make a couple of plays in that last [game]. Instead of us making them, it went the other way. A few miss hits, a few balls played that we didn’t need to play. Just the little things got us.”

Pisgah finished the season with a 19-8 record.

Holly Pond won the first the first two games of the match by identical 25-23 scores. Facing elimination, Pisgah dominated the third game, leading by as many as 12 points before posing the 25-14 win. In Game 4, Pisgah tied the match at 21-all before scoring four of the final five points to win and force the fifth and final game.

In Game 5, Pisgah led by as many four points at 10-6 and led 13-10 following a Holly Pond service error. After the Broncos scored three straight points to tie the score, Molly Heard’s kill put Pisgah back in front 14-13. But Makenna Folds’ kill tied the score, and Holly Pond took a 15-14 lead on a double-hit violation by Pisgah before winning it when Pisgah’s serve receive went into the net and the Eagles were able to keep the point alive.

Hughes recorded 22 kills and Heard added 19 for the Eagles, who also got 22 assists from Hannah Duncan and 14 assists from Bell Bobo. Kacie McLaughlin tallied 17 service points while Duncan had 10.

“We’ve definitely got to make it a standard to make regionals, and when we have opportunities to advance, advance,” Ellison said. “We’ve got to build on it.”