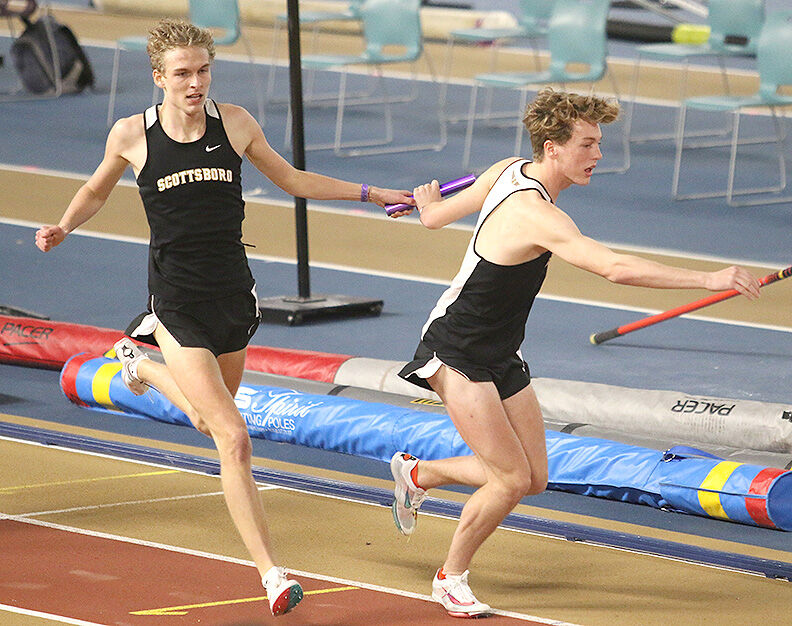 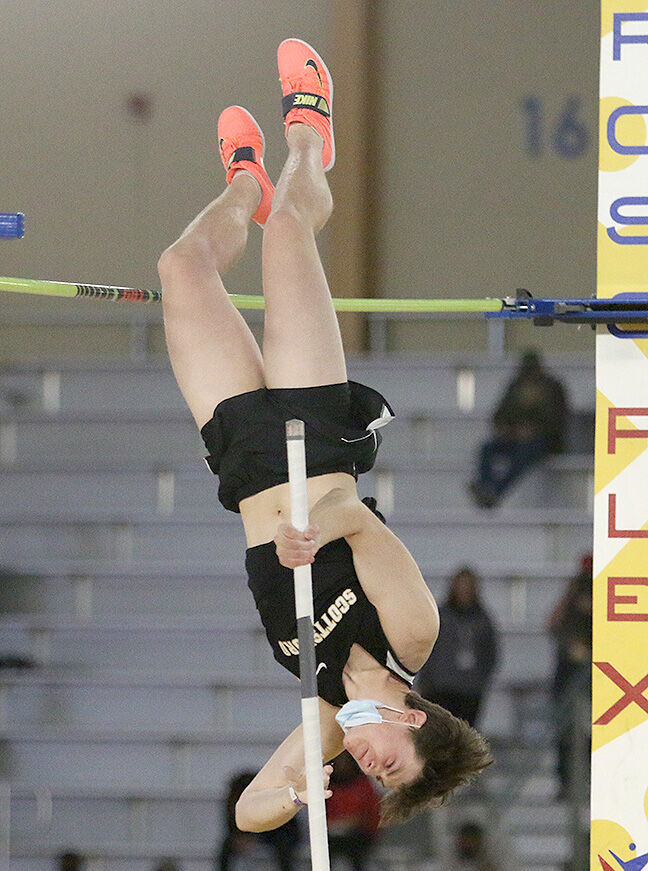 Scottsboro's Maddox Hamm goes up to clear the bar at 15 feet during the Class 6A Boys State Indoor Track and Field Meet. Hamm finished as the state runner-up in the event. 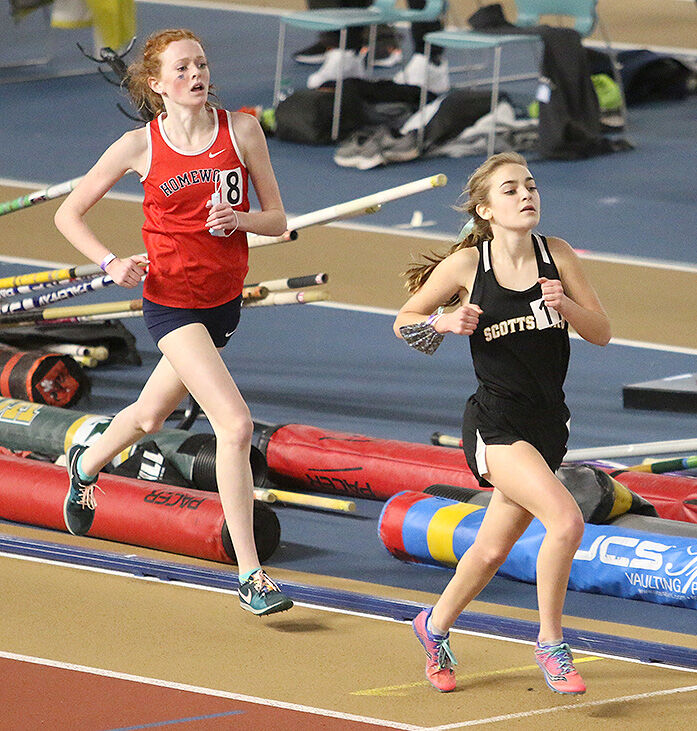 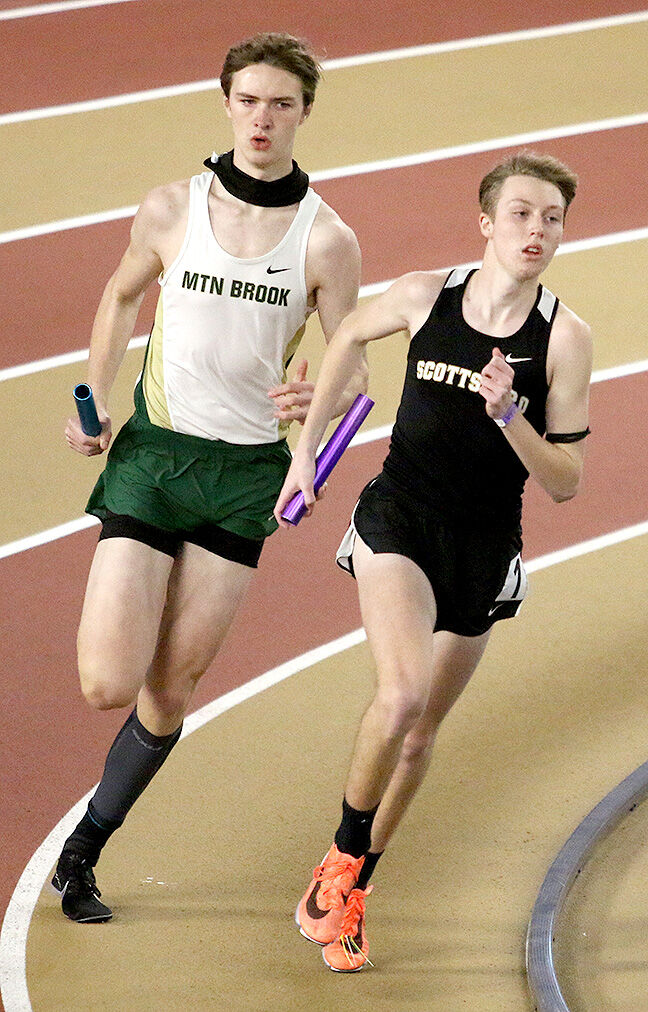 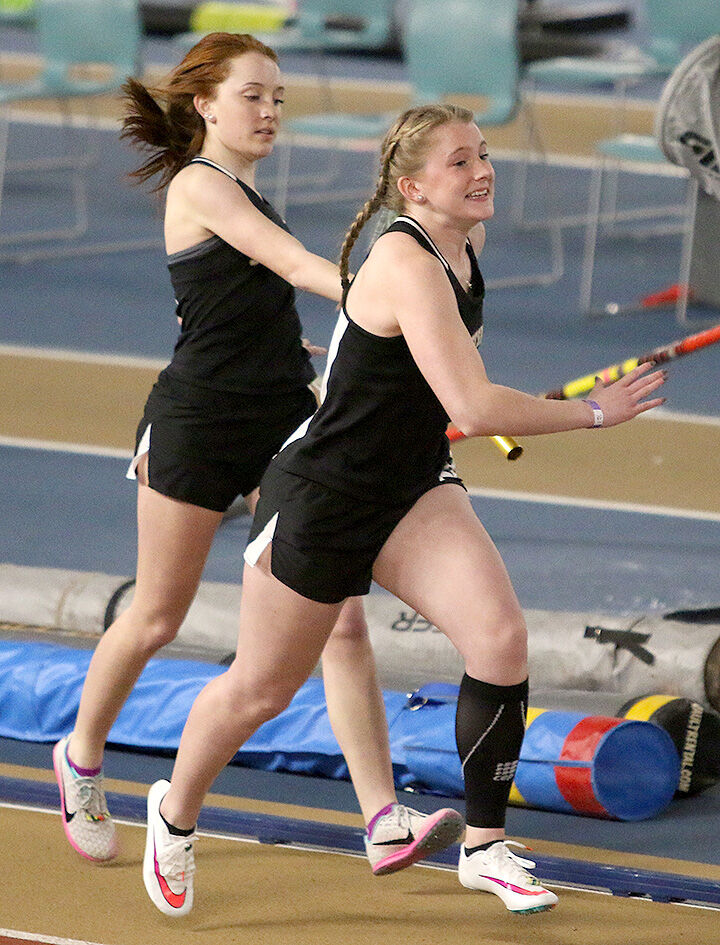 McCall Chandler (left) hands off to Charlsi Henderson during the Class 6A Girls 4x400-meter run at the AHSAA Indoor Track and Field Championships.

Scottsboro's Maddox Hamm goes up to clear the bar at 15 feet during the Class 6A Boys State Indoor Track and Field Meet. Hamm finished as the state runner-up in the event.

McCall Chandler (left) hands off to Charlsi Henderson during the Class 6A Girls 4x400-meter run at the AHSAA Indoor Track and Field Championships.

The Scottsboro varsity boys indoor track and field team knew it faced an uphill climb in its quest to win another state championship.

For a team that relies greatly on its distance runners, Scottsboro head coach Luke Robinson said the Wildcats knew a compressed state meet — the meet was changed from its usual two-day format to one that was five-plus hour-long meet because of COVID-19 restrictions — would be challenging for his runners.

With shorter amounts of rest between the 800-, 1600- and 3200-meter races, Scottsboro’s runners saw their times dip below their seeded times.

“Us being predominately a distance school, and everything getting compiled into one day, we knew it was going to be tough,” Robinson said. “And it was. Had a couple of runners running the 1-mile (1600), the 2-mile (3200) and the 800 all in the same day — well really, like four hours — and that’s just hard.”

The result was Scottsboro finishing third in the Class 6A boys team standings — the Wildcats entered the meet seeded second behind eventual state champion Opelika — with a team total of 52 points. Opelika took the top spot with 81 points, while Homewood edged Scottsboro for the state runner-up spot with 66 points.

“Tough day. Obviously we didn’t get what we were coming here to get,” said Robinson, whose team was searching for a third straight state championship and a first in 6A after winning three of the last four 5A titles. “I know they’re bummed about it, but I think the kids competed well. Obviously we didn’t have some things go our way. Opelika and Homewood had some things go their way. In our events, our competitors did better than they were supposed to do. In Homewood’s and Opelika’s events, their competitors did significantly worse than they were supposed to.”

Scottsboro, which had athletes competing in eight of the state meet’s 14 events, posted state runner-up finishes in four events and medaled (top-three finishes) in a total of six events.

Also for Scottsboro, Benson Atkins finished fourth in the 1600 (4:29.19) while Cooper Atkins was sixth in the 400-meter dash (53.01). Jonah Warren competed in the shot put but fouled on all three of his attempts.

Class 6A Girls — Scottsboro finished 21st in the Class 6A girls team standings with a team score of three points.

Ally Campbell scored those points for Scottsboro with a sixth-place finish in the 1600-meter run (5:45.41). She finished five spots better than her seeded time for the event.