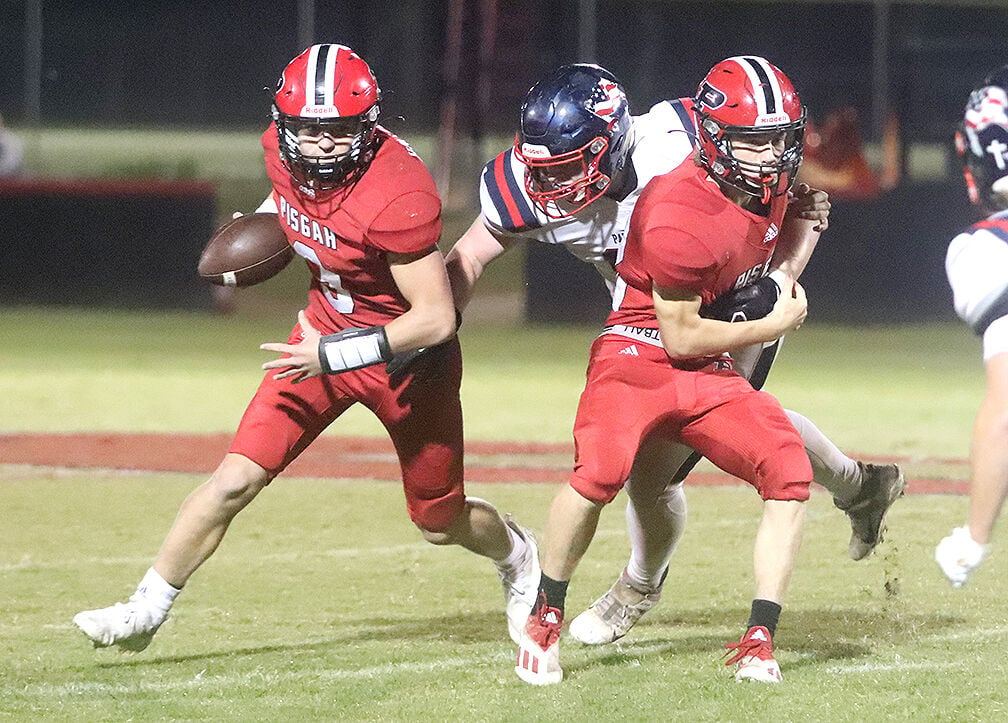 Pisgah quarterback Mason Holcomb gets away from a DAR defender after Legion McCrary shields the defender from him during Pisgah's 58-28 win Friday night. 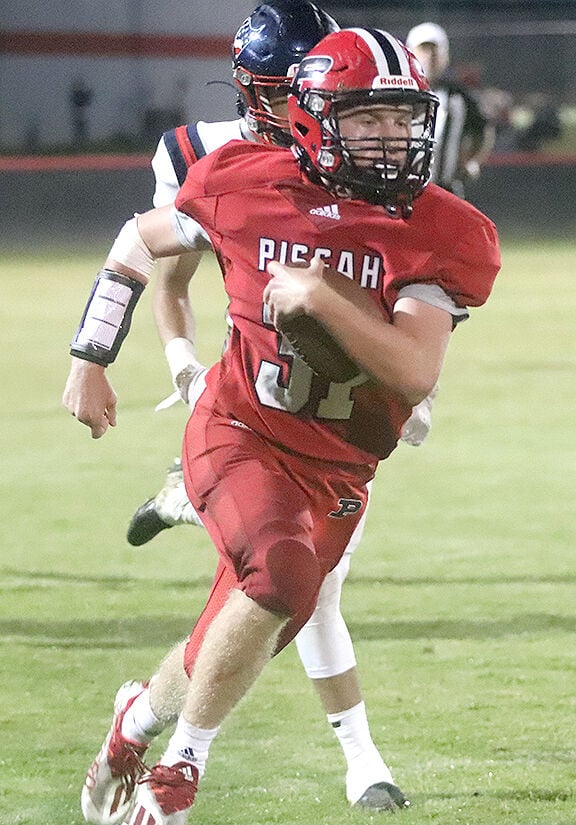 Legion McCrary breaks into the open to gain some of his 126 rushing yards during Pisgah's 58-28 win over DAR Friday night. It was the second straight game the Eagles eclipsed the 50-point mark 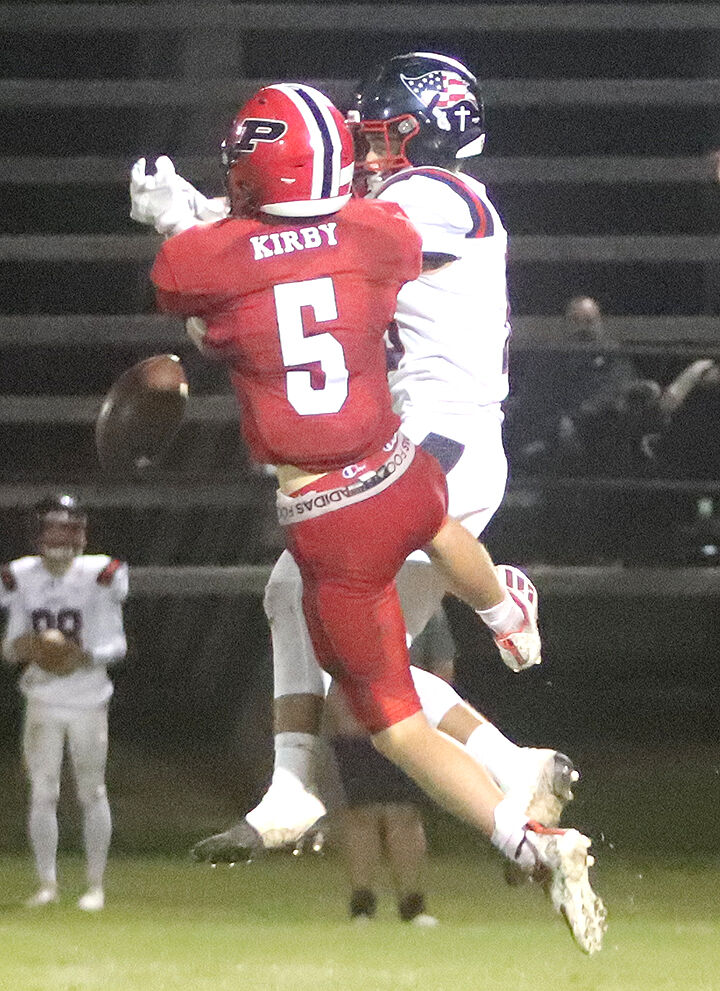 Jacob Kirby (5) breaks up a pass intended for a DAR receiver during Pisgah's 58-28 win Friday night. 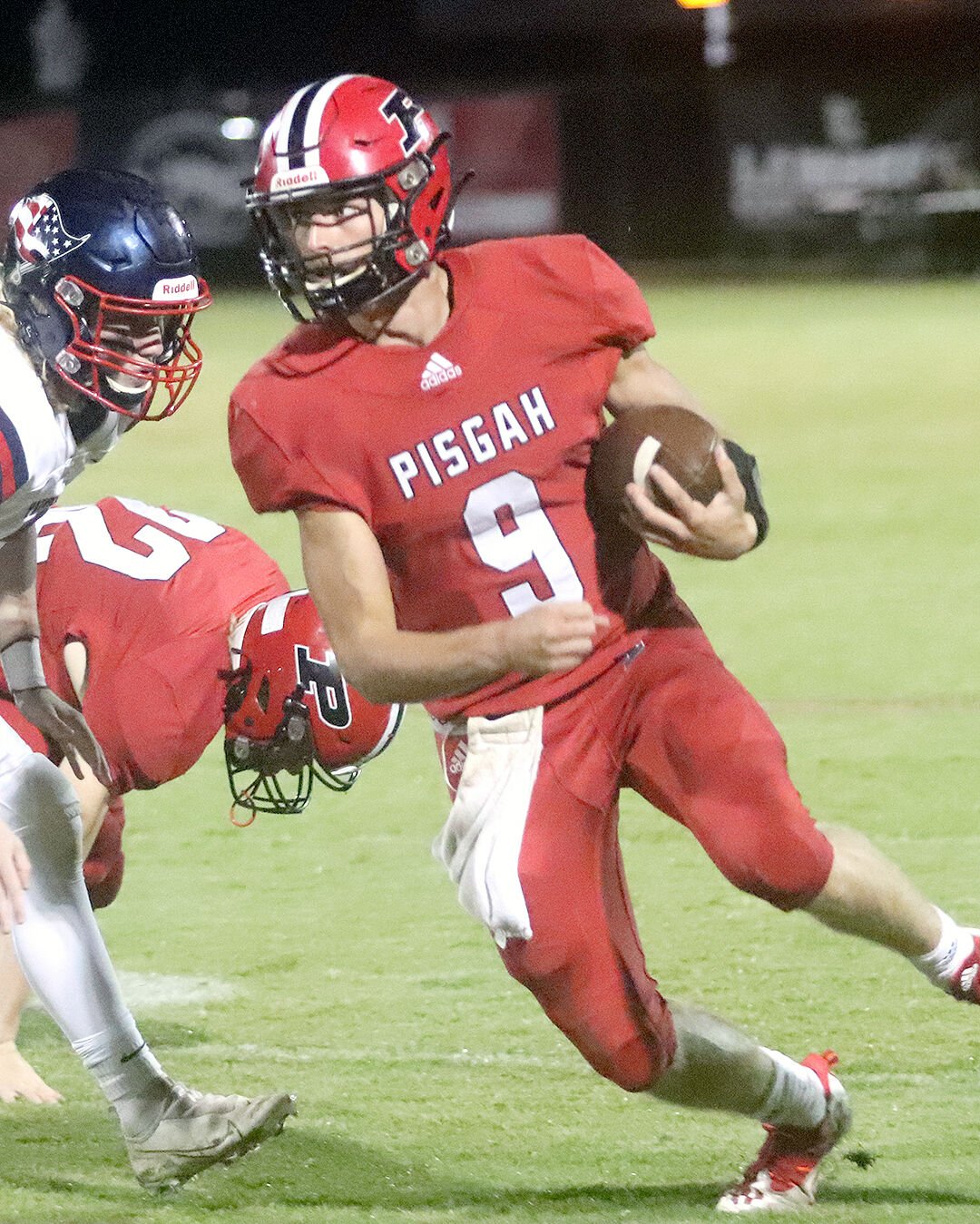 Pisgah quarterback Mason Holcomb gets away from a DAR defender after Legion McCrary shields the defender from him during Pisgah's 58-28 win Friday night.

Legion McCrary breaks into the open to gain some of his 126 rushing yards during Pisgah's 58-28 win over DAR Friday night. It was the second straight game the Eagles eclipsed the 50-point mark

Jacob Kirby (5) breaks up a pass intended for a DAR receiver during Pisgah's 58-28 win Friday night.

A week after scoring the most points a Pisgah team has scored in 22 years, the Eagles managed to best last week’s point total this week.

In a game where both teams combined for 86 points, the Pisgah Eagles defeated Class 4A DAR 58-28, scoring on each of their seven offensive drives as well as returning a kickoff for a touchdown.

“(Offensive coordinator Adam Gilbert) had a great plan coming into (the game), our guys bought into it. One thing I like about it is our guys don’t care who gets the ball. We share the ball really well, we got some playmakers, our offensive line is doing a pretty good job and we run the football so right now, everything is clicking so we just need to keep getting better,” Pisgah head coach Luke Pruitt said.

The game started out with both teams trading touchdowns, with the Patriots scoring on the opening drive of the game and the Eagles responding and converting their two-pointer to put themselves up 8-7 near the end of the quarter. From then on, Pisgah never lost the lead.

After a high snap on a Patriots’ punt put the Eagles inside the red zone to start their second possession, Eagles senior Parker Law scored on a 10-yard touchdown to put the Eagles ahead 14-7. On the next drive, Pisgah sophomore Jacob Kirby got an interception to put the ball right back in the Eagle’s hands at the Patriots 46. The Eagles would get to the 8-yard line before several penalties had knocked them back to the DAR 21. On third and goal from the 19-yard line, sophomore Mason Holcomb hit freshman Luke Gilbert for a touchdown to give the Eagles a 22-7 lead with just under four minutes left in the half.

The Patriots were quick to respond, scoring in five plays, with senior Cameron Lindsay hitting a receiver for a 50-yard touchdown to bring the game within one score with two minutes left in the half. The Eagles again responded with a quick score of their own, scoring in just three plays to take a 30-14 lead into halftime.

To start the second half, the Eagles proved to not lose a beat coming out of the locker room, with freshman Legion McCrary opening the second half with a kick return touchdown.

After both teams again traded touchdowns in the quarter, the fourth quarter began with Pisgah leading 46-21.

The Eagles quickly slammed the door shut on an improbable comeback, shutting down the Patriots offense and putting up two more touchdowns to bring home their second straight win, 58-28.

“(Holcomb) was thrown in there last year for us and had to kind of learn on the fly but he’s progressed. Coach has done a good job with him trying to get him to do the things he’s good at, that’s the thing, he does a good job finding what our kids do best,” Pruitt said. “Mason’s done a good job but it helps that we have a little competition, guys pushing as well too. Competition always helps but I thought he’s done a good job putting the ball where it needs to be, hasn’t turned it over, (he’s) taking care of the football so I’m proud of him.”

After starting 0-3, the Eagles have now won back-to-back games, both in convincing fashion, winning by 42 and 30, respectively. The Eagles offense have averaged 43.6 points on the year and with the heart of their region schedule starting up, maintaining that pace will be key.

“Our kids never quit, they’ve been working the whole time. We told them if we just keep getting better every day, and we have. We’re proud to get a win tonight, we’re fixing to get right into region play and it doesn’t get easier anywhere soon so we just have to keep working,” Pruitt said. “We have to tackle better (next week). We have to be able to stop the run and be able to run the football. North Sand Mountain has a really good team, I don’t care what their record is, (NSM head coach Keith Kirby) does a really good job but it’s going to be won at the line of scrimmage. That’s the thing we have to do a good job of, we have to run the football and stop the run to beat North Sand Mountain next week.”