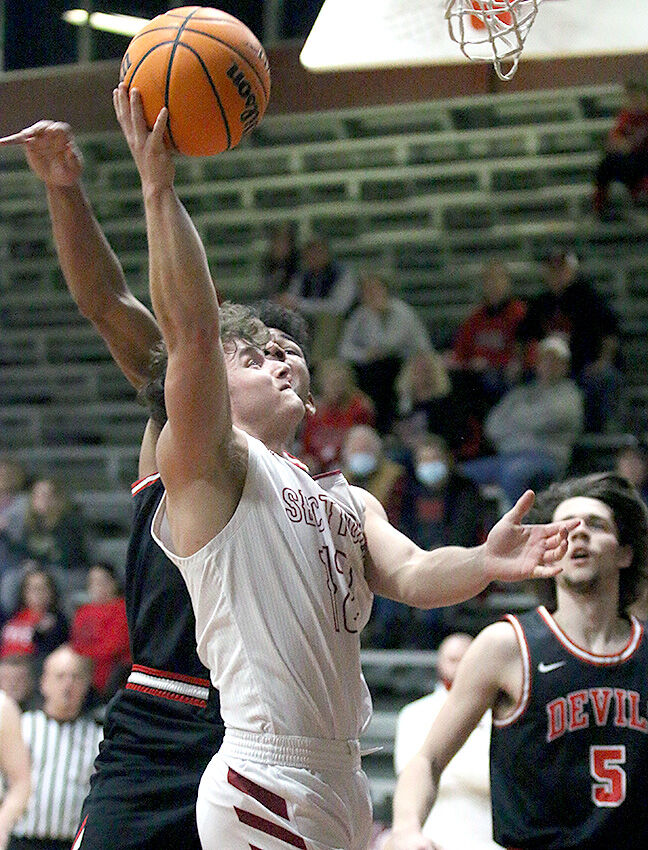 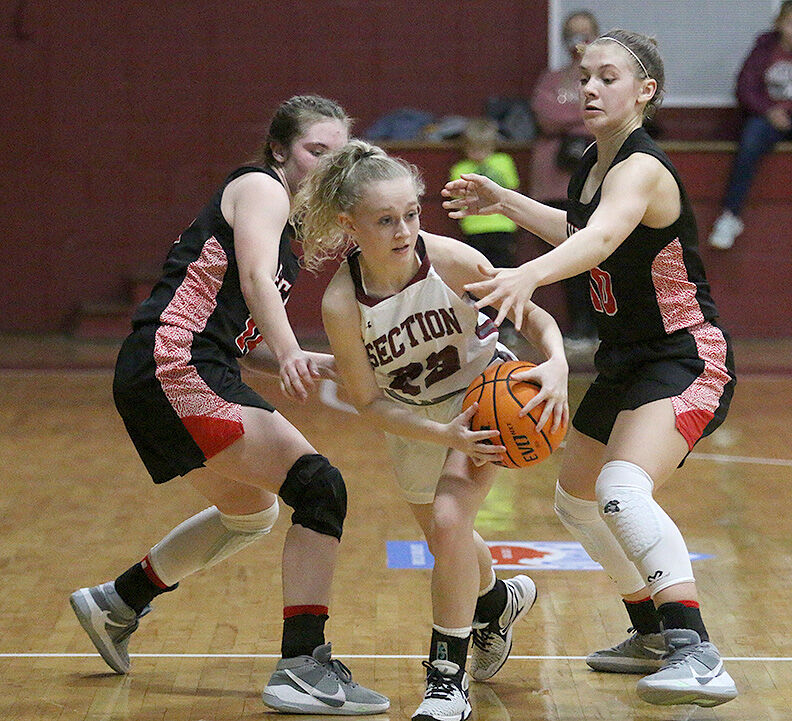 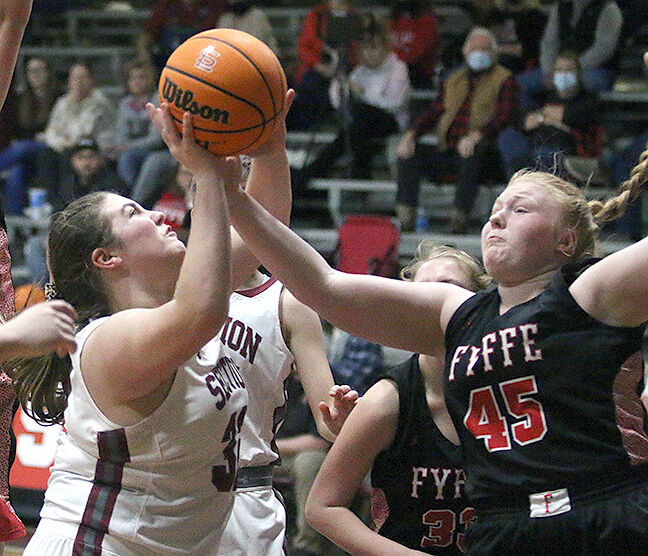 Section's Stormie Little (left) draws a foul on Fyffe's Alexia Barber as she attempts a shot. 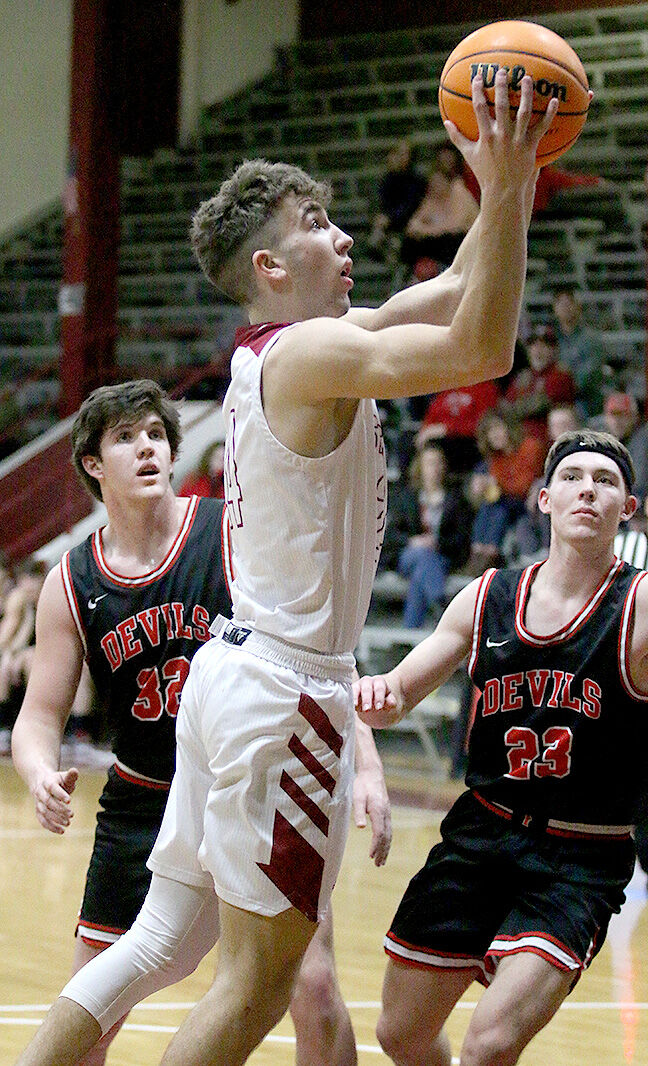 Alex Guinn goes up for a layup during Section's 70-65 loss to Fyffe Tuesday night.

Section's Stormie Little (left) draws a foul on Fyffe's Alexia Barber as she attempts a shot.

Alex Guinn goes up for a layup during Section's 70-65 loss to Fyffe Tuesday night.

The Section varsity boys basketball team has had plenty of impressive wins this season.

But the Lions have also suffered a few agonizing losses, down-to-the-wire contests that haven’t gone their way.

Class 2A No. 8-ranked Section experienced another of those defeats Tuesday, falling to visiting 3A No. 2-ranked Fyffe 70-65.

“You can feel it, you can see it — we’re right there. Just haven’t gotten over the hump,” said Section head coach Derek Wynn. “I’m proud of the way we played. Can’t take anything away from them. But we’ve just got to fix a few things and hopefully get rolling.”

“We had (scoring) drought in the third quarter — we had one in the second quarter but we struck right there defensively and was trading blows with them. The third quarter, defense let down, (Fyffe was) scoring and we weren’t and they built a lead,” Wynn said. “We played better in the fourth quarter. At the end of the game, we’ve got a chance to tie game with four free throws and we don’t make them. But was that the difference in the game? No. It goes back to the third quarter and not playing defensive like we’re supposed to.”

Fyffe shot 58 percent from the field and 83 percent (15 of 18) from the free-throw line along with holding the rebounding advantage. Fyffe head coach Neal Thrash said the Red Devils needed every bit of their solid performance told to win.

“Section would not go away,” Thrash said, “so it was a great for the fans (to watch) but terrible for old coaches.”

Brody Dalton, a UAB football signee, led Fyffe with 29 points and six rebounds. The Red Devils also got 16 points and seven assists from Parker Godwin, nine points each from Xavier Works and Tate Goolesby and four points and 12 rebounds from Micah Johnson.

Section had four players in double figures, led by Gabe Hilley’s 17 points. The Lions also got 15 points from Jacob Cooper, 14 from Logan Patterson and 13 from Alex Guinn.

The teams meet again to close the regular season on Friday at Fyffe.

Fyffe 66, Section 48 — At Section, visiting Fyffe used a strong third quarter to spark a win over the Lions Tuesday night.

Stormie Little scored the final five points of the first quarter to give Section a 19-17 lead after one quarter, but Fyffe moved in front 36-28 at halftime. The Red Devils opened the third quarter with a 14-1 scoring run and ultimately led 54-44 after three quarters.

Little finished with nine points for Section (4-23) while Kenleigh Owens and Savannah White scored eight each and Morgan Armstrong and Jennifer Vega had seven each.

Leading scorers for Fyffe (7-14) were Emma Twilley with 23 points, Alyssa Webb with 16, Alexia Barber with 11 and Jade Johnson with 10.

Sorry, there are no recent results for popular articles.