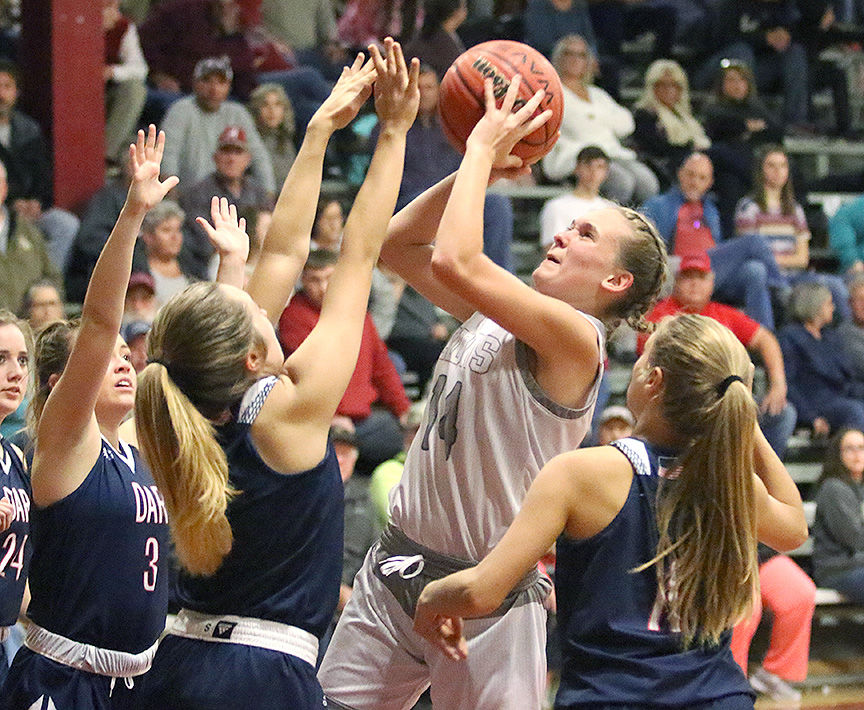 Madison Armstrong goes up for a putback during Section's 55-38 win over DAR. 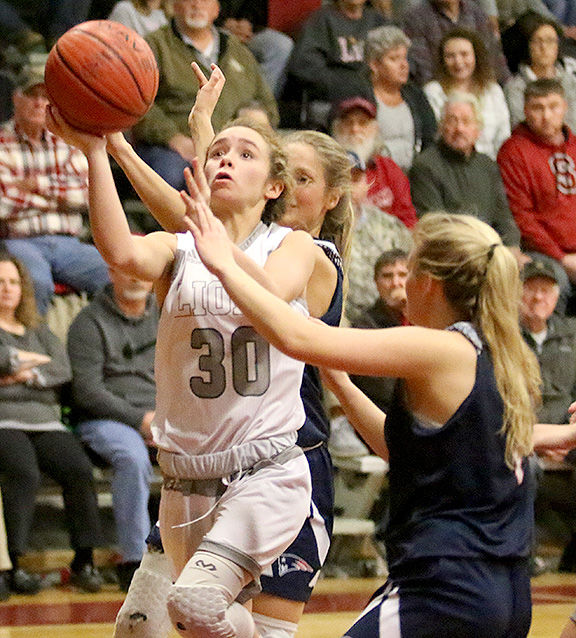 Savannah White (30) gets past DAR defenders for a layup as Section improved to 3-0 with a 55-38 win Tuesday night.

Madison Armstrong goes up for a putback during Section's 55-38 win over DAR.

Savannah White (30) gets past DAR defenders for a layup as Section improved to 3-0 with a 55-38 win Tuesday night.

The Section girls basketball team’s preferred style of play is slow, but its record is rising fast.

The Lions stayed perfect on the season, improving to 3-0 with a 55-38 win over visiting Class 4A team DAR Tuesday night.

Section (3-0) overcame an early deficit, built a halftime lead and slowly extended that advantage in the second half with its methodical offensive style and a defense that challenged shots and gave up very little second-chance opportunities to the Patriots.

It’s a formula that helps the Lions manage their depth — Section has only seven players — and takes advantage of their ability to score inside in the post and outside on the perimeter.

“People know we want to slow the ball down, but the things we’ve practiced, we know how to stay as slow and calm as we can when you try to speed us up,” Stevens said. “When you want to play like we do and we sit back (defensively), and if you don’t shoot well early in the game, then it’s easy to get frustrated. That’s something we kind of bank on.”

The Patriots led 12-6 late in the first quarter, but Section held them scoreless for nearly seven minutes while moving in front 19-12. Morgan Armstrong’s 3-pointer gave the Lions a 13-12 lead 36 seconds into the second quarter, and the scoring run also featured a Hanenburg free throw, a 3-pointer from White and two free throws from Madison Armstrong. After DAR cut into the lead, White hit another trey just in the quarter’s final minute to help ultimately Section hold a 22-19 halftime edge.

The Lions began the third quarter with a 11-2 scoring run and eventually led by as many 13 points before carrying a 38-28 advantage into the fourth quarter. DAR never got closer than eight, and Section used a late flurry of baskets from Vega, Madison Armstrong and White off of DAR turnovers to seal it.

“Learning to play when you’re tired is something we’ve talked about,” Stevens. “We’ve looked better in every fourth quarter we’ve played. That was probably our best quarter (of this game), so that’s good to see.”