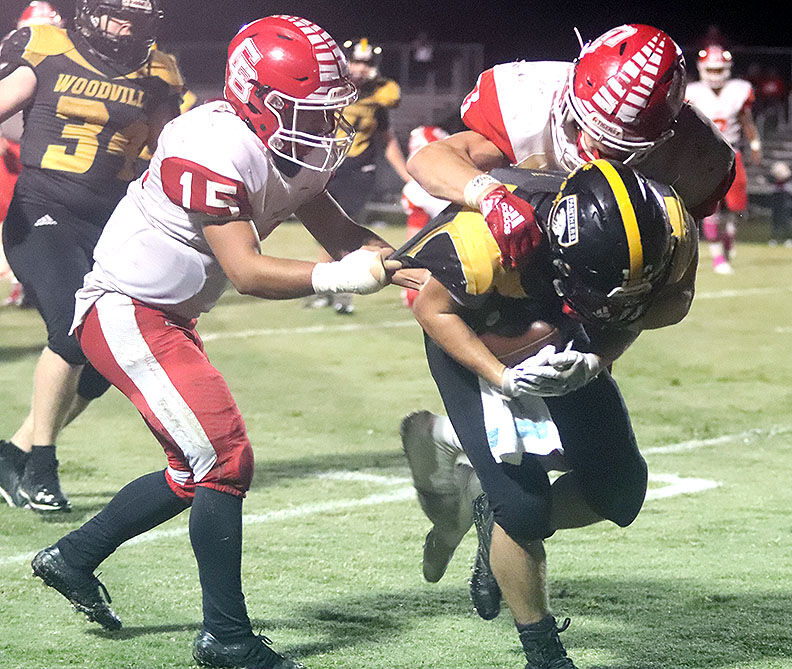 Woodville’s Cam Talley fights for extra yardage as Cedar Bluff’s James Clifton (15) and Preston Burt (3) try to bring him down. 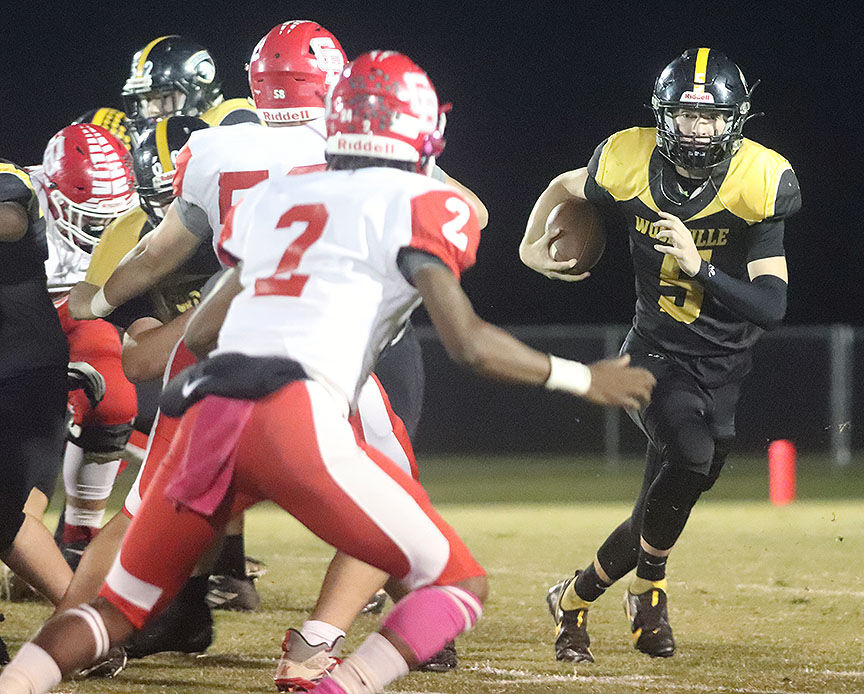 Jackson Peek (5) looks to get outside of Cedar Bluff defenders Dylan Kinard (58) and Anbre Leek (2) during Woodville’s 56-28 Class 1A Region 7 loss Thursday night. 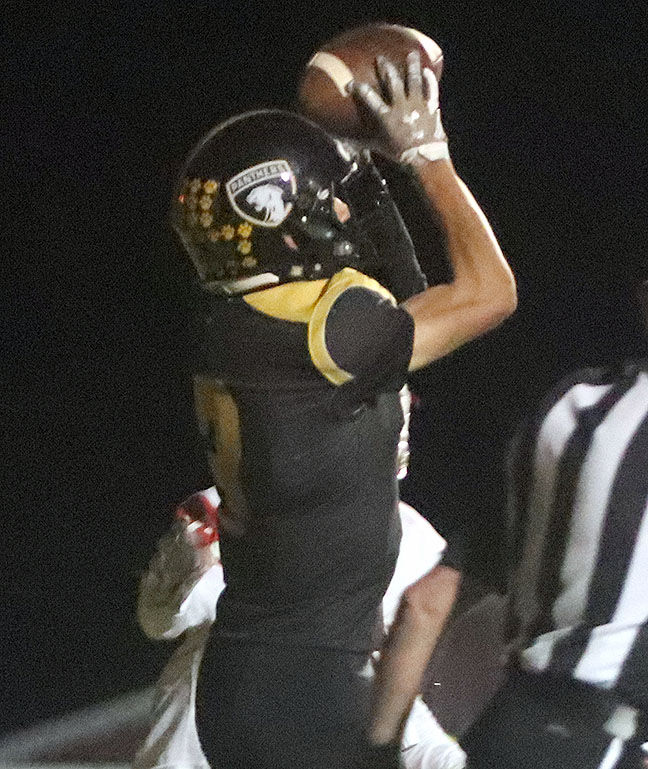 Woodville’s Cam Talley fights for extra yardage as Cedar Bluff’s James Clifton (15) and Preston Burt (3) try to bring him down.

Jackson Peek (5) looks to get outside of Cedar Bluff defenders Dylan Kinard (58) and Anbre Leek (2) during Woodville’s 56-28 Class 1A Region 7 loss Thursday night.

An advantage in time of possession is often part of a winning formula for high school football teams.

Unfortunately for Woodville, there are exceptions to that formula.

Despite having a time of possession of only 10:19, Cedar Bluff recorded 12 plays of 15 yards or more and scored on their first eight possessions during a 56-28 Class 1A Region 7 win over host Woodville Thursday night at Frazier Field.

Cedar Bluff (2-4, 2-1) never had a goal-to-go situation in the game and its shortest touchdown covered 13 yards.

An already thin Woodville defense because of injuries suffered another blow when senior linebacker Easton Parker left the game with a leg injury early in the second quarter.

“When (Parker) went down, I didn’t have a plan for moving our guys around for that. We had the three busts early in the first half that was (Parker’s) spot. That’s on me,” said Woodville head coach Tyler Vann. “We try to get guys practiced up for their position, much less a backup, especially when they start somewhere else on defense. It’s tough when you lose guys and have to start moving them around.”

Cedar Bluff had two rushers top the 100-yard mark. James Clifton ran for 167 yards and three touchdowns on 11 carries while Jacob Burleson rushed for 113 yards and a score on seven carries. Burleson also completed 4-of-5 pass attempts for 86 yards and two touchdowns.

Clifton’s 19-yard touchdown run gave the Tigers a 6-0 lead less than four minutes into the game, but Woodville (2-5, 2-2) capped a 16-play, 8:32-minute, 81-yard drive with Jackson Peek’s 8-yard touchdown run and Peek’s two-point conversion pass to Brett Berger to grab an 8-6 lead after one quarter.

Cedar Bluff went back in front on Burleson’s 78-yard touchdown run with 9:25 left in the second quarter, and Burleson followed with touchdown passes of 35 and 15 yards to Preston Burt to give the Tigers a 28-8 halftime advantage.

Clifton raced 53 yards for a touchdown on the first play of the second half, but Woodville answered with Peek’ 6-yard touchdown run to pull within 35-14. Shane Hughes then recovered Woodville’s second onside kick of the game, leading to Peek’s 51-yard touchdown pass to Cam Talley. Peek ran for the two-point conversion to pull Woodville to within 35-22 with 5:41 left in the third quarter.

“We stole some possessions with those surprise onside kicks,” Vann said. “That was big for us.”

But Cedar Bluff responded with 21-unanswered points, getting touchdown runs of 15 and 26 yards from Anbre Leek and Clifton respectively late in the third quarter and a 66-yard touchdown run from Burt early in the fourth quarter.

Peek finished with 69 rushing yards and two touchdowns on 28 carries and was 12-of-25 passing for 166 yards and one score for Woodville, which fell to 0-13 all-time against Cedar Bluff. Talley had 40 rushing yards on 11 carries and caught five passes for 101 yards.

Despite the loss, Woodville remains firmly in the 1A Region 7 playoff hunt. After a bye next week, the Panthers play at Gaylesville Oct. 16 and host Appalachian Oct. 23 to close out region play.

“We’ve got to (win) one of them if we want to get in,” Vann said. “We get a much needed bye week to rest up. We got tons of guys injured. We need this bye week badly.”