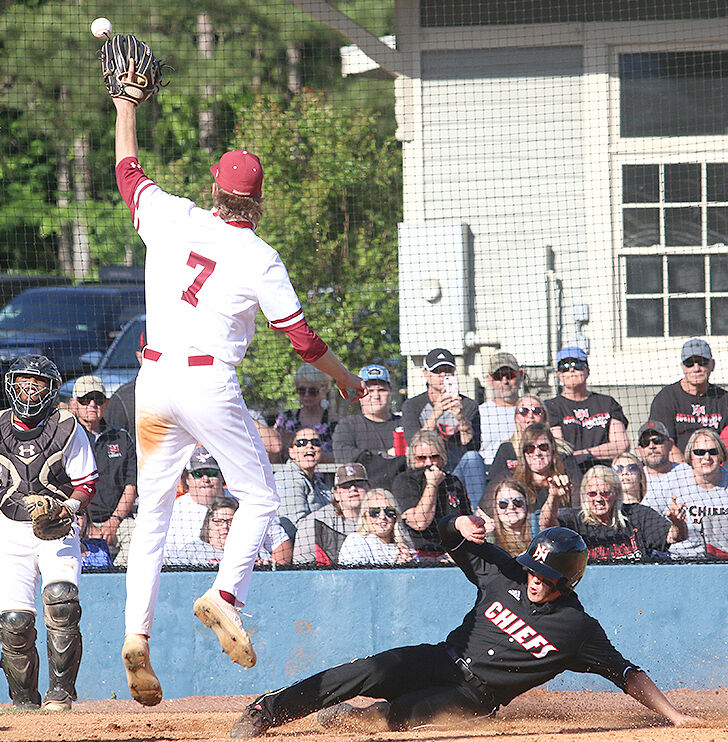 North Jackson's Carson Smith slides in safely after scoring on a passed ball against Oneonta in Game 1 of the teams' Class 4A state semifinal series. 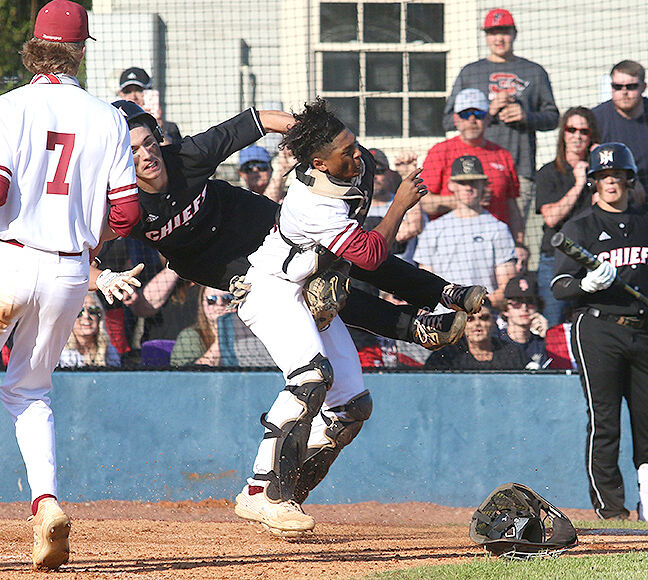 North Jackson's Nick Jernigan flips into the air after trying to avoid a collision with Oneonta catcher Cameron Dailey after being tagged out during Game 1 of the teams' Class 4A state semifinal baseball series.

North Jackson's Carson Smith slides in safely after scoring on a passed ball against Oneonta in Game 1 of the teams' Class 4A state semifinal series.

North Jackson's Nick Jernigan flips into the air after trying to avoid a collision with Oneonta catcher Cameron Dailey after being tagged out during Game 1 of the teams' Class 4A state semifinal baseball series.

For the North Jackson baseball team, Friday night was both the worst and best moment of the season.

The No. 5-ranked Chiefs were swept 13-3 and 16-3 by No. 10 Oneonta in a Class 4A State Semifinal series at the Oneonta Recreation Center.

Rough series aside, North Jackson head coach Cole Porter said the fact that the Chiefs were in the state semifinals with a team with only two seniors starters and five freshman playing key roles signaled an impressive feat for the 2021 Chiefs.

“It didn’t go how we wanted it to, but it was big (for the program). When I got here people talked about the 2015 and 2015 teams that went the quarterfinals and semifinals and how much interest and excitement there was. I think we brought some of that back (this year) and showed our kids we can have that kind of success. We lose to really good seniors but hopefully for the guys coming back, this is hopefully a stepping stone. The way we lost kind of took some of the shine off (making the semifinals), but hopefully it’s a motivating factor for our guys, that we’ll come in with a chip on shoulder next year and get better.”

North Jackson was playing in the semifinals for the second time in school history. The Chiefs also lost to Oneonta in 2016.

The 2021 Oneonta team advanced to play top-ranked Mobile Christian in the state finals today and tomorrow in Montgomery.

North Jackson (30-10) fell behind 2-0 in the first inning in Game 1 of the series, but the Chiefs cut the deficit in half in the top of the third when Carson Smith walked and ultimately scored on a passed ball. North Jackson then took the lead in the fourth when Luke Guess doubled scored when Dalton Morris reached on an error and when Morris scored when Macklin Guess reached on an error.

But Oneonta rebounded in the bottom of the fifth, scoring five runs to take the lead and then using six more runs in the sixth to invoke the mercy rule.

Landon Barnes finished with two hits for North Jackson while Macklin Guess and Luke Guess had one each.

In Game 2, Oneonta, the visiting team for the second game, jumped out to a 3-0 lead in the top of the first inning on Beau Ragsdale’s three-run home run. North Jackson countered with two runs in the bottom of the inning when Smith tripled and scored on Brandon Poole’s RBI single and Poole scored on Matt Adams’ RBI single.

But the Redskins were in charge from there, scoring three runs each in the third and fifth innings before tacking on seven in the sixth. Barnes homered for North Jackson in the sixth to close the scoring.

Barnes and Smith both finished with two hits while Poole and Adams had one each.

“I think our youth kind of showed a little bit really for the first time since early in the season,” Porter said. “Oneonta, as bad as you hate to say it, was a little bit tougher than us, handled the adversity better. We missed some chances in Game 1 that we could’ve taken control and things could’ve been really different.”