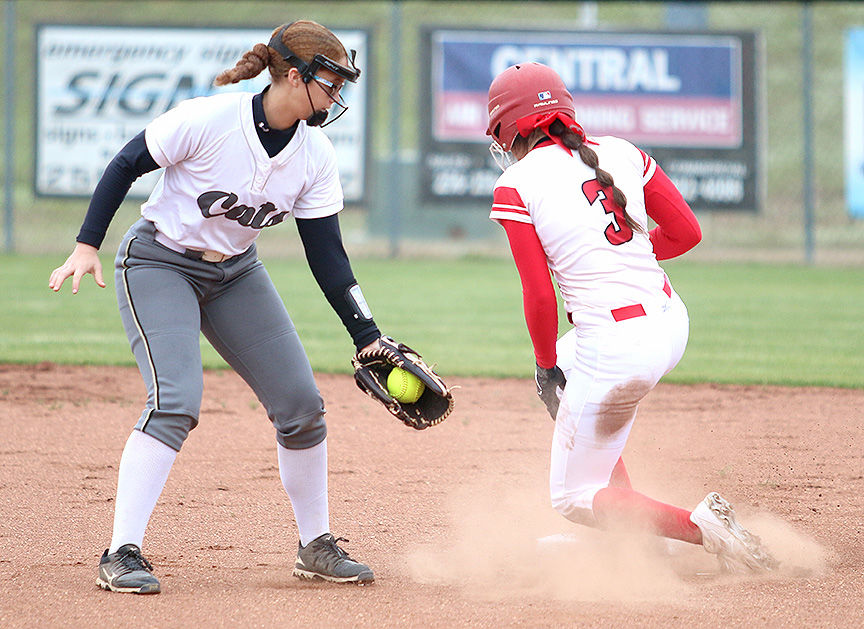 Kambrie Doss (left) and the Scottsboro softball team move up to Class 6A next season while Lila Kate Wheeler and Pisgah drop to Class 2A. 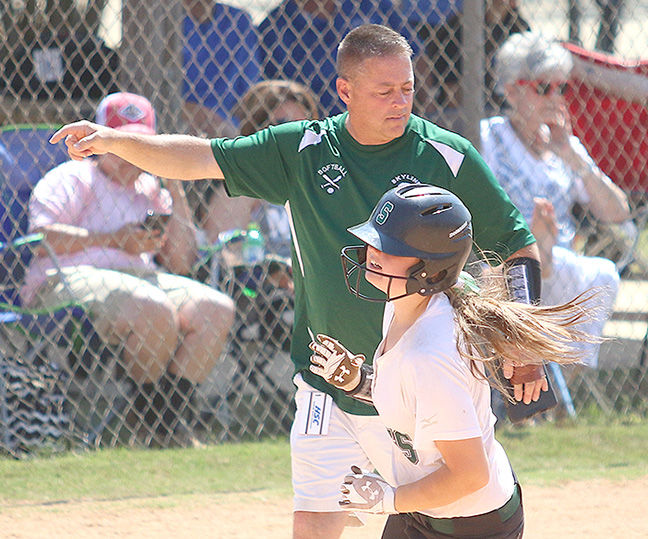 Skyline coach Slade Bellomy waves Gracie Stucky home to score a run in a North Regional game in 2018. Skyline will compete in Class 1A Area 15 the next two seasons. 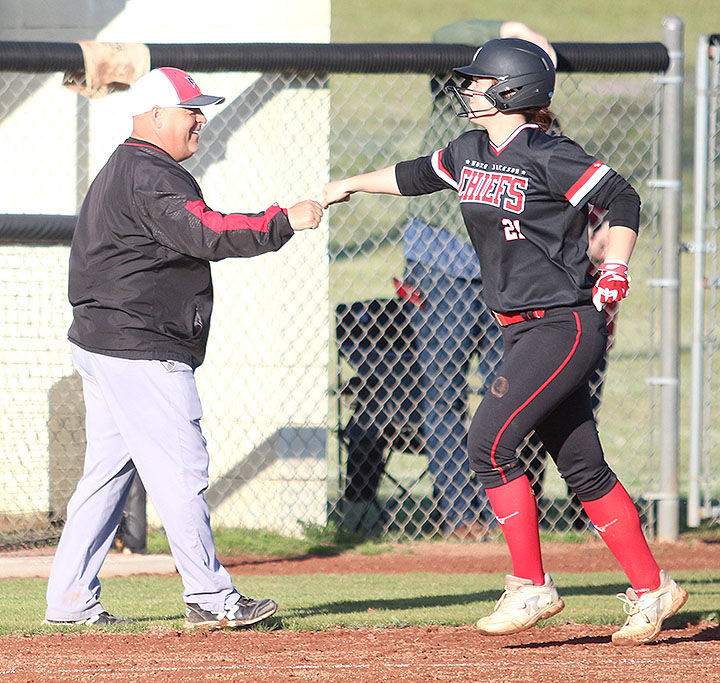 North Jackson softball coach Kevin Thompson congratulates Destry Lambert after she hit a home run this past season. North Jackson will compete next season in Class 4A Area 14 with DAR, Madison County and New Hope.

Kambrie Doss (left) and the Scottsboro softball team move up to Class 6A next season while Lila Kate Wheeler and Pisgah drop to Class 2A.

Skyline coach Slade Bellomy waves Gracie Stucky home to score a run in a North Regional game in 2018. Skyline will compete in Class 1A Area 15 the next two seasons.

North Jackson softball coach Kevin Thompson congratulates Destry Lambert after she hit a home run this past season. North Jackson will compete next season in Class 4A Area 14 with DAR, Madison County and New Hope.

The Scottsboro softball team racked up plenty of miles the past two seasons being part of an area that included trips to Ardmore and East Limestone.

The travel for area game road trips will be shorter for the Wildcats the next two seasons.

Scottsboro, which is making the move from Class 5A to 6A, will compete in 6A Area 15 during the 2021 and 2022 seasons against Arab and Fort Payne.

“It’s familiar territory,” said Scottsboro head coach Robyn Johnson. “This is what the area looked like when I first got here (in 2015). We were 6A then. When we dropped to 5A, but Arab was in our area. We always play Fort Payne so they were already on the schedule. We’re excited about it. We know we could’ve had to travel a lot farther. The last two years was a lot of riding (for area games).”

“It’s easier to schedule those area games and you can spread them out if you want,” she said. “It’s also easier to make them up (in case of rainouts).”

Class 4A Area 14 — The North Jackson softball team will see its area expand next season.

The Chiefs and longtime area foe DAR remain in Class 4A Area 14. But Randolph is leaving for Class 4A Area 13, and New Hope and Madison County are moving in to make Area 14 a four-team league.

Madison County is dropping down from Class 5A while New Hope is moving up from 3A.

“I definitely think it makes the area stronger,” said North Jackson head coach Kevin Thompson. “You’re bringing in two new teams that have a history of making regionals. All of the teams in the new area are well-coached, have good players and are just real good teams.”

North Jackson has not played against Madison County during Thompson’s three-year coaching tenure, but the Chiefs have played New Hope in tournament games.

Thompson believes all four teams will be capable of making a strong postseason run.

“That’s three good teams we’ve got to compete with,” he said. “That competition is going to be good will make you better for the regional if you get out of the area. It’ll be a challenge, but I think our girls will look forward to it.”

Class 2A Area 15 — A team that has won two of the last three Class 3A state championships is dropping down to Class 2A.

Pisgah, which owns an AHSAA record 10 all-time fastpitch softball state titles, drops to Class 2A for the first time since the 2004 season.

The Eagles, who won Class 2A state titles from 2001-04, will join a Class 2A Area 15 that features area holdovers North Sand Mountain, Section and Ider.

“The move puts us with some teams we haven’t been playing, some county teams, so that’s good for softball in the county,” said Pisgah head coach Billy Duncan, adding that his team will also play in-county teams North Jackson and Scottsboro next season.

Duncan, who will be entering his 23rd season as Pisgah coach in 2021, teaches math at NSM, a new area foe of Pisgah’s that is coached by one of Duncan’s former Pisgah players, Brooke Crawford.

“I’ll be coaching against kids I teach,” Duncan said. “That’ll be a different experience.”

Crawford had NSM potentially on the path to its first regional appearance in 2020 before the COVID-19 (coronavirus) pandemic ended the season in March.

“I am excited to see what the 2021 season will hold,” Crawford said. “NSM has proven to get better and stronger as a team each year, and I believe that the girls will come out on fire after this year’s short season. This area will be one of the best in north Alabama and will be very competitive for all teams. I look forward to seeing the girls back on the field playing against our area rivals this spring.”

Meanwhile, Pisgah’s move to Class 2A brings back what was once one of the area’s fiercest softball rivalries. In the early to late 2000s, Pisgah and Ider were perennial state-title contenders. The teams even meet in the 2004 state finals before Pisgah prevailed in the “If Necessary” winner-take-all championship game. After Pisgah moved to Class 3A, both teams began winning state titles while continuing the rivalry as regular-season foes.

“For years that was a big rivalry,” Duncan said. “It’ll be fun to see that spin back up.”

Class 1A Area 15 — The Skyline and Woodville softball teams will have some company in area play the next two seasons.

The rivals were the only members of Class 1A Area 14 the last two seasons after Whitesburg Christian dropped the sport. During the 2021 and 2022 seasons, however, the Vikings and Panthers will compete in Class 1A Area 15 against Athens Bible, Decatur Heritage and Lindsay Lane.

“This new area is definitely going to be challenging with a couple of teams we normally don’t see,” said Skyline head coach Slade Bellomy. “In the past we have seen Athens Bible and Decatur Heritage at regionals once or twice, but now having to play them in the regular season and the area tournament, it’s going to be difficult to rattle off wins, which makes it harder to be one of the top two teams going to regionals. We haven’t played Lindsay Lane and don’t know much about them, but I’m sure they will play competitive ball.”

Class 1A Area 15 is one of only seven five-team areas in all seven AHSAA classifications.

“The drawback to such a big area is you’re not able to schedule but 10 out of area games, and in the past we have tried to schedule five to six teams that were Class 4A and up to get ready for regionals,” Bellomy said. “Nothing against 1A teams, but normally the bigger schools have a larger pool (of athletes) to choose from, which makes them really good competition. With that said, we will have our hands full playing such a large area schedule. In 1A, anything can happen.”