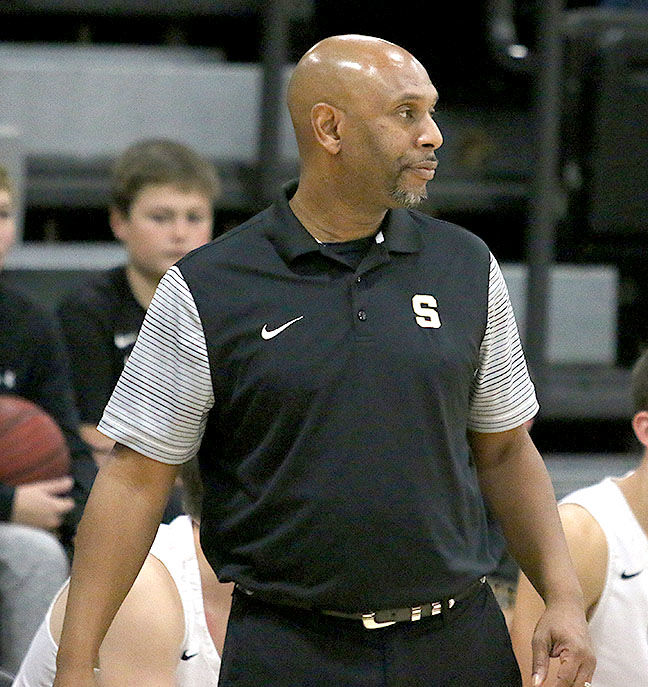 Kenny Hill's Scottsboro varsity boys basketball team faces some old rivals as they move up to play in Classs 6A Area 15 play next season. 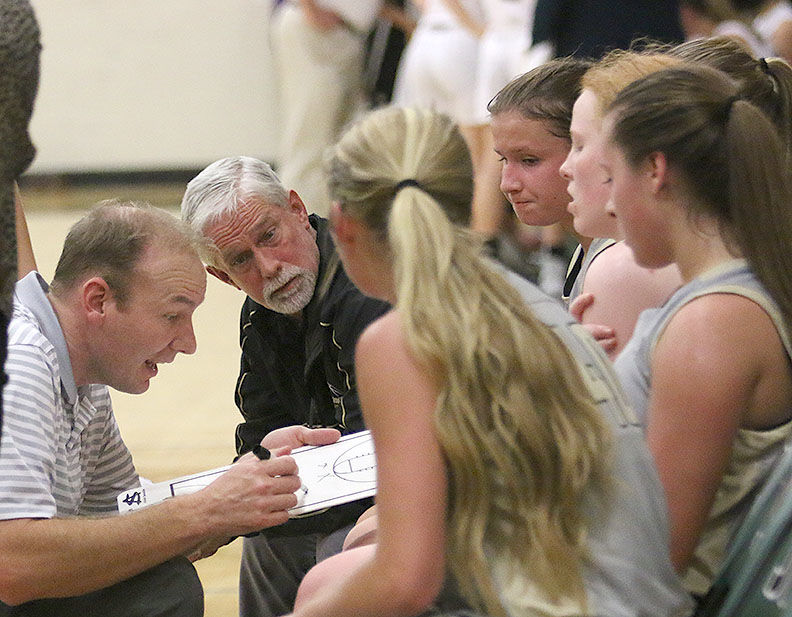 Scottsboro varsity girls basketball coach Brandon Childers (left) draws up a play during a game at SJPII last season. Scottsboro opens its 2020-21 season against SJPII at home on Nov. 10.

Kenny Hill's Scottsboro varsity boys basketball team faces some old rivals as they move up to play in Classs 6A Area 15 play next season.

Scottsboro varsity girls basketball coach Brandon Childers (left) draws up a play during a game at SJPII last season. Scottsboro opens its 2020-21 season against SJPII at home on Nov. 10.

The Scottsboro varsity girls and boys basketball team’s 2020-21 schedule will feature a mixture of old and new foes.

Scottsboro plays several of the teams it played last season while adding two new teams and several different holiday tournaments to the schedule.

The biggest change is the classification in which the Wildcats will complete. Scottsboro moves up from Class 5A to 6A next season, and SHS boys coach Kenny Hill and SHS girls coach Brandon Childers will see their teams battle with Arab, Buckhorn and Fort Payne in Class 6A Area 15 play.

Scottsboro and Arab were Class 5A Area 15 rivals last season, while Fort Payne was on Scottsboro’s schedule in non-area play.

Buckhorn is one of two new regular-season home-and-home series for the Scottsboro teams this season. The other is a series with fellow Class 6A school Columbia.

Childers likes that Wildcats play a lot of traditional opponents while adding some new foes as well.

Added Hill, “I think it’s a good schedule that’s going to prepare us for the area and postseason.”

Scottsboro’s other two area opponents from last season, Brewer and Guntersville, remain on the schedule. The Wildcats play Brewer in a home-and-home series while facing Guntersville only once, on the road, in the regular-season finale on Feb. 4.

Scottsboro’s annual series with archrival North Jackson is set for Nov. 19 at home and Jan. 28 at NJHS in Stevenson. Scottsboro also plays a home-and-home series with St. John Paul II — the Wildcats’ host SJPII in the season opener Nov. 10 — Madison County and DAR. The SHS boys play at the McCallie School in Chattanooga, Tennessee in a return game from last season when McCallie visited Scottsboro.

The SHS girls will play in Geraldine’s Thanksgiving Tournament for a second straight season (Nov. 23-25) and in the SSBA Christmas Tournament in Guntersville Dec. 28-30.

“Last year we hosted a tournament (after Christmas), but the Sure Shot tournament came out with teams early, so instead of fighting over teams, we just jumped in it,” Childers said. “There will be some good teams in it and the travel is pretty quick.”

Childers said the SHS girls still have room to add a few games to the schedule.

“I’m really looking forward to the Spain Park tournament,” Hill said. “That’s going to be a good test and a fun trip for us. We usually host a Thanksgiving tournament, so that’s a good change for us.”

The SHS boys will also play in the Gaston Christmas Classic Dec. 21-23. Other teams committed to play in that tournament are Gaston, Boaz, Jacksonville, Moody, Piedmont and Casey County (Kentucky).

Scottsboro will host its first annual MLK Day Classic on Jan. 18. The event will feature four varsity boys games and one varsity girls game. Seven varsity boys teams have committed to the event, as Scottsboro will be joined by Buckhorn, Fyffe, Hewitt-Trussville, McCallie (Tennessee), Ramsay, which is coached by Scottsboro alum Denton Johnson, and another team to be announced. Ramsay’s girls will face a still to be determined opponent.

“That’s going to be a great day of basketball,” Hill said.

AHSAA area tournaments for the 2020-21 season must be played sometime from Feb. 6-13, while sub-regional games are slated for Feb. 15 (girls) and Feb. 16 (boys). AHSAA Regionals are 17-25 — Scottsboro teams are bracketed for the Northwest Regional at Wallace State Community College in Hanceville instead of the usual Northeast Regional at Jacksonville State — and the AHSAA state tournament is March 1-6.