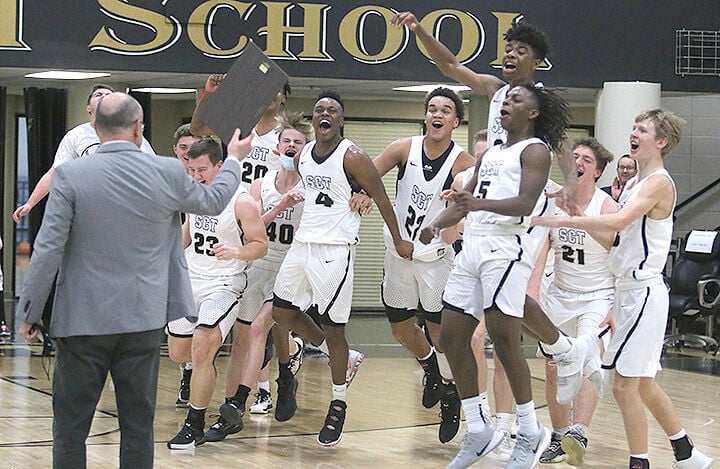 Scottsboro players race to get the Class 6A Area 15 Tournament championship plaque after defeating Buckhorn 64-62 in the area finals. 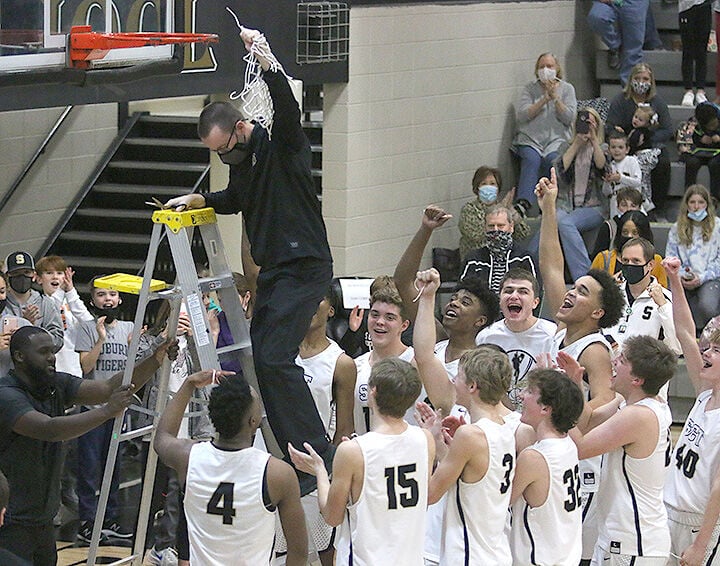 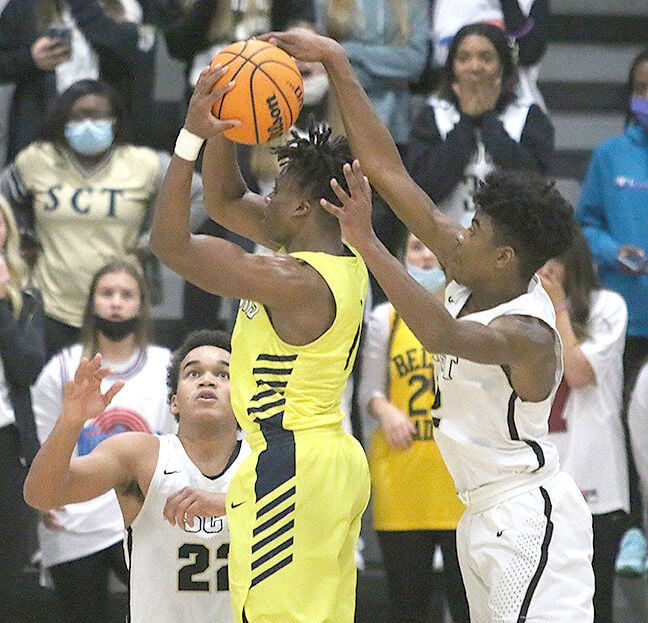 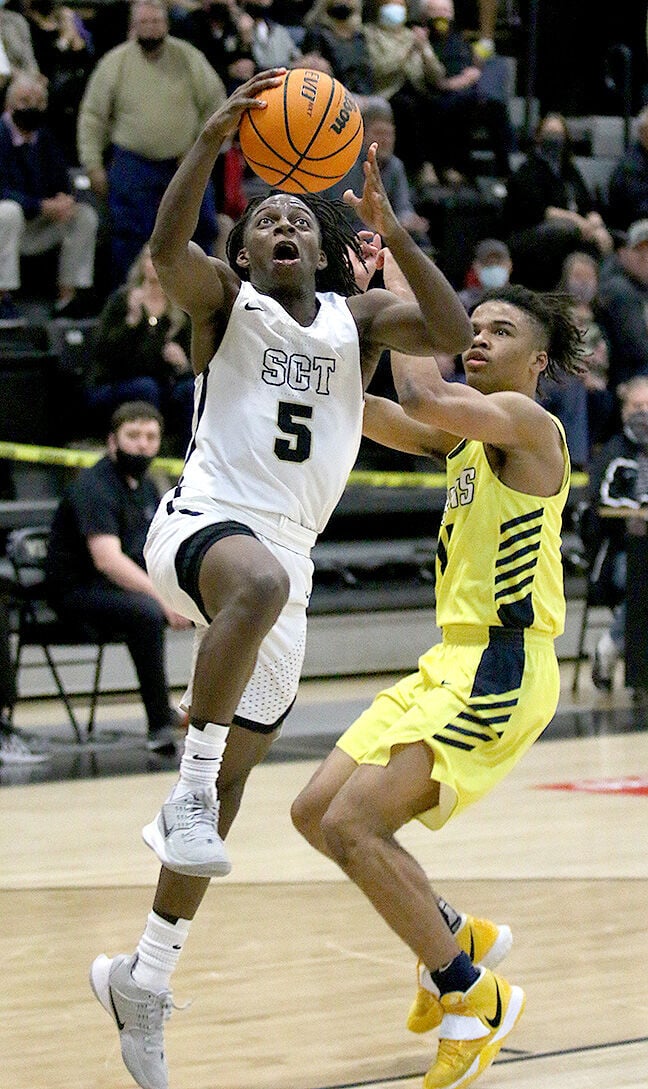 BJ Harris goes in for a layup after getting a steal in the fourth quarter of Scottsboro's 64-62 win over Buckhorn in the Class 6A Area 15 Tournament championship game. 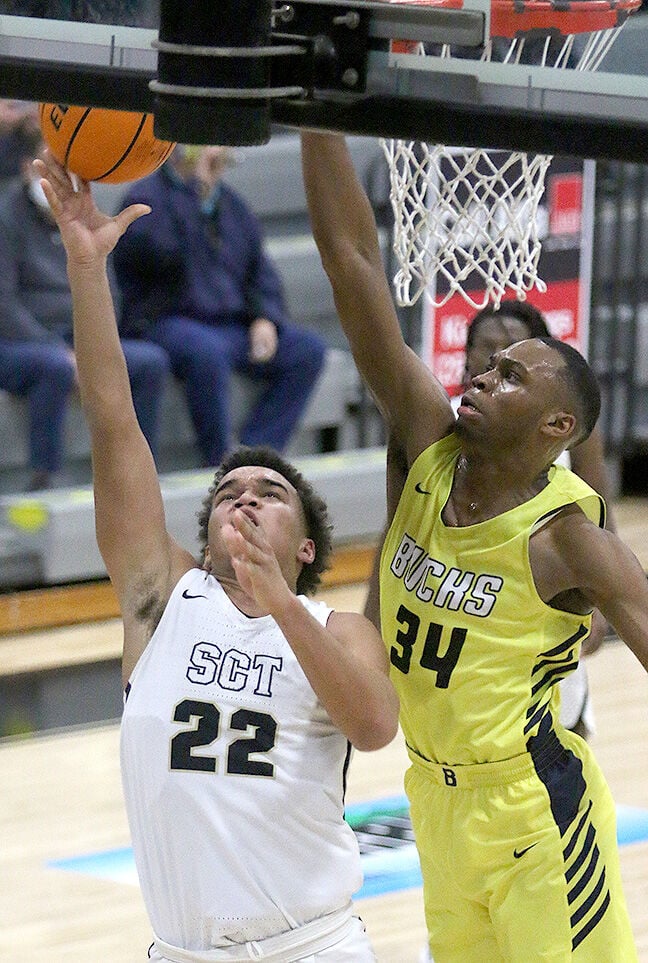 Jordan Davis goes up for a layup during Scottsboro's 64-62 win over Buckhorn in the Class 6A Area 15 Tournament championship.

Scottsboro players race to get the Class 6A Area 15 Tournament championship plaque after defeating Buckhorn 64-62 in the area finals.

BJ Harris goes in for a layup after getting a steal in the fourth quarter of Scottsboro's 64-62 win over Buckhorn in the Class 6A Area 15 Tournament championship game.

Jordan Davis goes up for a layup during Scottsboro's 64-62 win over Buckhorn in the Class 6A Area 15 Tournament championship.

Buckhorn’s inbound pass hung in the air as it approached its intended receiver.

But Scottsboro’s Jordan Davis and Cordell Worthy and played the roles of defensive back perfectly.

The two Wildcats deflected the lob pass away from Buckhorn’s Jalon Chapman, allowing time to expire and triggering a spirited celebration as top-seeded Scottsboro claimed the Class 6A Area 15 Tournament championship with a 64-62 win over the second-seeded Bucks Friday night at Hambrick Hall.

It’s Scottsboro’s third area championship in the past seven seasons. It was also Scottsboro’s 16th win in its last 17 games.

“Our guys were laser focused,” said first-year Scottsboro head coach Jason Bell. “Everything didn’t go our way. But our kids are never going to stop believing. That’s one of the things I love about them.”

The win allows Scottsboro (22-4) to host Area 16 runner-up Madison Academy in a Class 6A Northwest Sub-regional contest on Wednesday at 6:30 p.m. It was originally scheduled for Tuesday but was pushed back one day because of potential inclement winter weather.

Scottsboro went 2-1 against the Bucks this season. The home team won all three games, which were decided by a combined six points.

“Two really good teams. I’m thankful we played them here. We had a great crowd and it was loud. Home-court advantage definitely helped us,” said Bell, whose team improved to 14-0 at home this season.

Scottsboro enjoyed leads for 23-16 after one quarter and 39-32 at halftime, but Buckhorn finished the third quarter on an 11-3 run to take a 52-51 lead into the fourth quarter.

The Bucks led 56-53 midway through the fourth quarter, but BJ Harris’ steal and layup and Jordan Davis’ free throws put the Wildcats back in front. After Buckhorn regained the lead on a tip-in, Parker Bell swished a 3-pointer for a 60-58 Scottsboro lead with 2:14 remaining. After a Buckhorn turnover, JaVaris Branford scored inside off an assist from Tyson Sexton for a 62-58 lead. Sexton then scored off an assist from Parker Bell for a 64-58 lead with 1:15 remaining.

Buckhorn got within 64-62 and then sent Scottsboro to the foul line with 17.8 seconds remaining. After Scottsboro missed the front end of a 1-and-1 opportunity, Buckhorn ran the clock down to the closing seconds when the Sexton blocked Cam Jamar’s shot attempt. After a scrum for the basketball, Buckhorn gained possession and called timeout with 0.9 seconds left.

Scottsboro then called three timeouts to go over all of its defensive possibilities as Buckhorn prepared to inbound from the sideline near mid-court. That’s when the lob to Chapman was batted away by Davis and Worthy to end the game.

Davis finished with 21 points and Parker Bell netted 15 for Scottsboro while Harris had 11, Sexton had eight, Worthy had five and Branford had four.

Alex Garcia scored 14 points for Buckhorn while Chapman and Nylan Thomas had 13 each and Jamar had 11.

“I couldn’t be any prouder of a group of kids,” Jason Bell said.