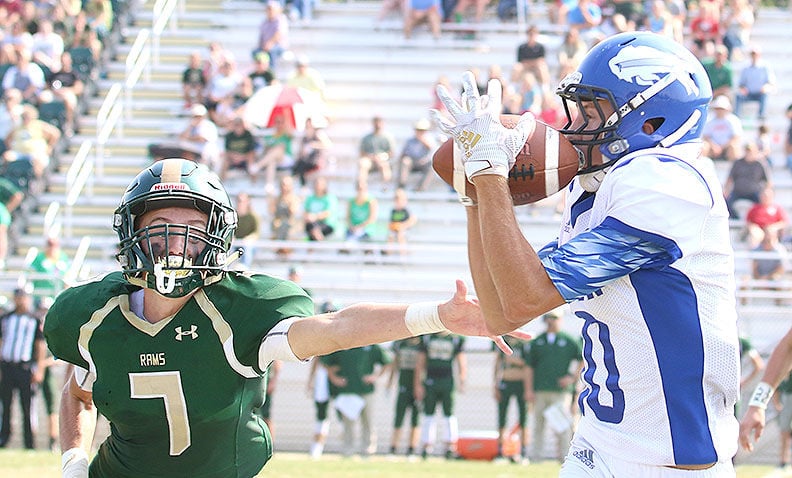 Jayden Culpepper catches a pass for a long gain during NSM's 43-36 loss at Sylvania Saturday morning. 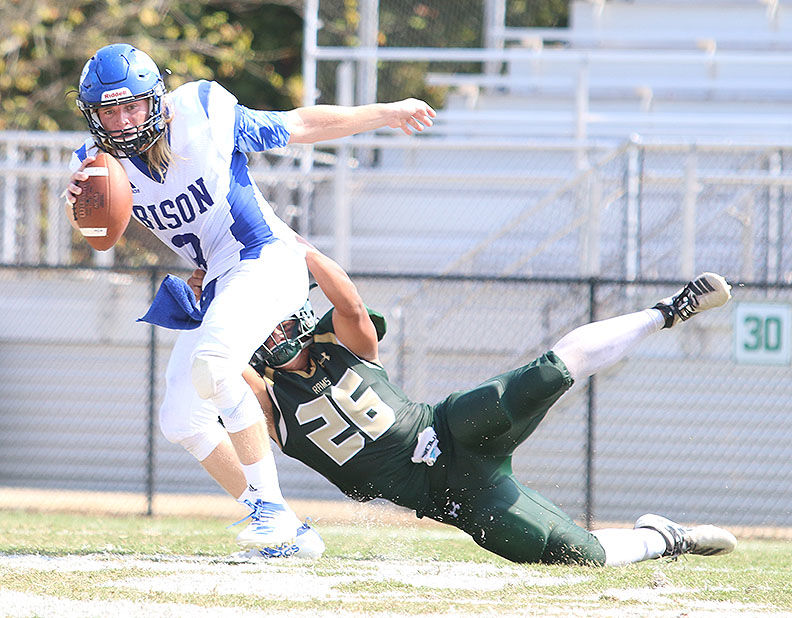 NSM quarterback Landon Green avoids a Sylvania defender trying to sack him during the teams' game on Saturday.

Jayden Culpepper catches a pass for a long gain during NSM's 43-36 loss at Sylvania Saturday morning.

NSM quarterback Landon Green avoids a Sylvania defender trying to sack him during the teams' game on Saturday.

North Sand Mountain’s Saturday morning battle with Sylvania ended with a heart-breaking loss for the Bison. Sylvania won the contest 43-36 on Saturday after lightning delays forced the game to be postponed Friday night.

NSM head coach Keith Kirby was not happy with the result, but was proud of his team.

“I’m proud of the guys and the way they fought their ends off right to the bitter end,” said Kirby.

A controversial call by the referees late in the game stopped a potential game-winning drive for the Bison. With 2:14 left in the game, Sylvania scored a touchdown, and the extra point game the Rams a 37-36 lead. NSM got the ball back and started driving. Bison quarterback Landon Green converted a fourth-and-eight and NSM had the ball at their own 40-yard line. On the next play, Green was sacked for a 14-yard loss. Three plays later, Green threw an interception that Sylvania’s Grant Atchley returned for a touchdown. Three flags were thrown on the play. The referee told Kirby there was an illegal procedure called against NSM, a holding called against NSM and a roughing the passer penalty called against Sylvania. The referee told Kirby the illegal procedure penalty on NSM and the roughing the passer against Sylvania would offset, and the Rams would have the option to decline the holding penalty and keep the result of the play, which was a touchdown for Sylvania with 20 seconds left in the game. Jaxon Andrede’s extra point was no good, and NSM still had a chance to score and win the game with a two-point conversion. A block in the back penalty forced NSM to start its drive at their own nine yard line. Green completed a pass to Jonah Pennington for 28 yards. The clocked stopped with 5 seconds left to allow the chains to get set. NSM hurried to the line to spike the ball. Green spiked the ball, but the clock kept running and expired.

Kirby said his team had several chances to win the game, and the loss could not be chalked up to bad calls by the referees.

The game was tied after one quarter of play. Green threw a pick six early in the second quarter, but the Bison answered with a seven-minute drive, capped off by a Green touchdown run. The two-point conversion was no good. Andrede kicked a 22-yard field goal at the end of the first half to extend Sylvania’s lead to 24-20. The two teams traded scores in the third quarter, and the Rams led 30-28. The Bison scored first in the fourth quarter on another Green touchdown run, and NSM led until Sylvania scored with 2 minutes left in the game.

NSM is set to take on Class 2A Region 8 opponent Cedar Bluff on Friday in Higdon. The Tigers come in 5-0 on the season. Kirby said his team will have to get over this loss quickly and start getting ready for the big region game on Friday night.