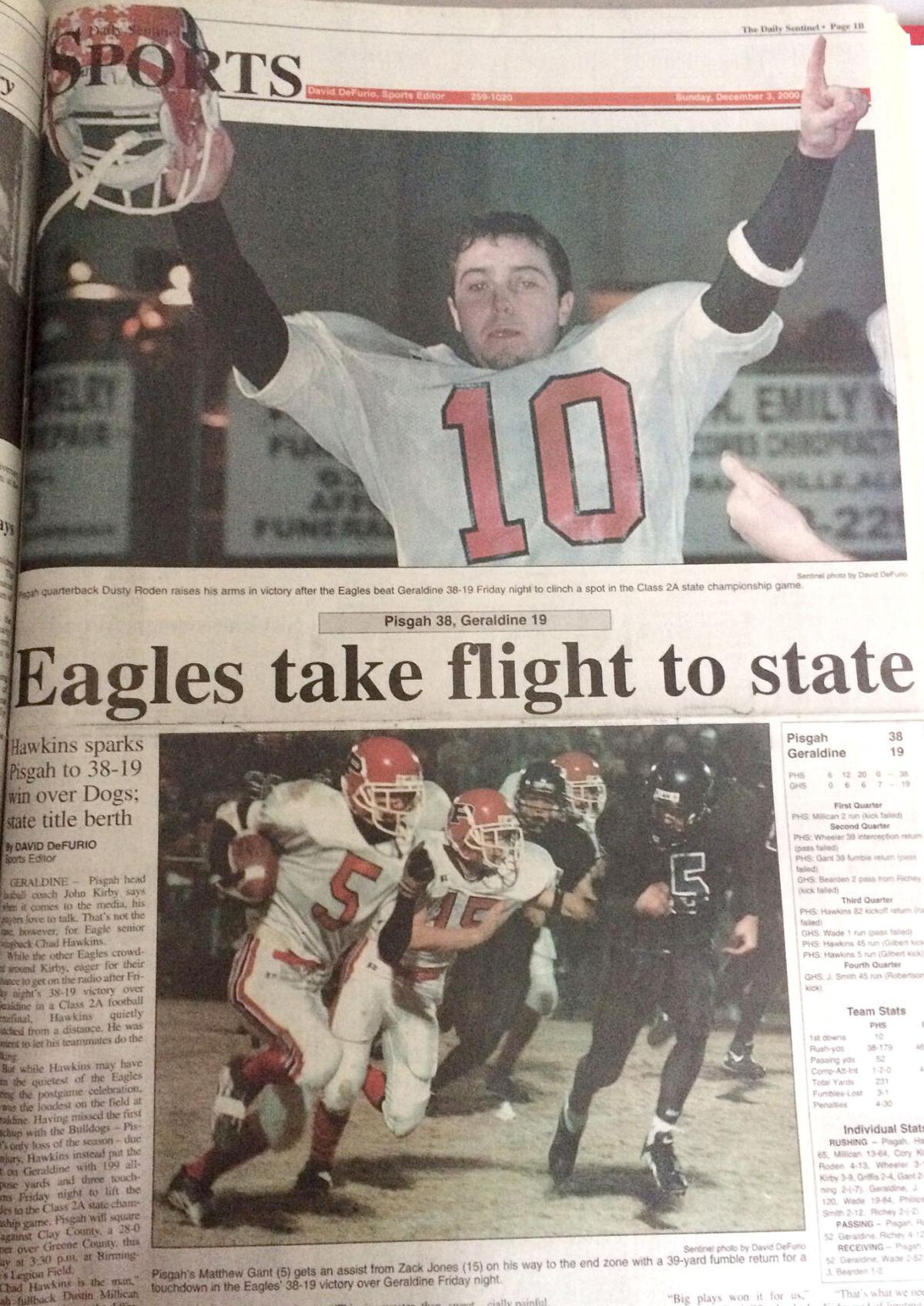 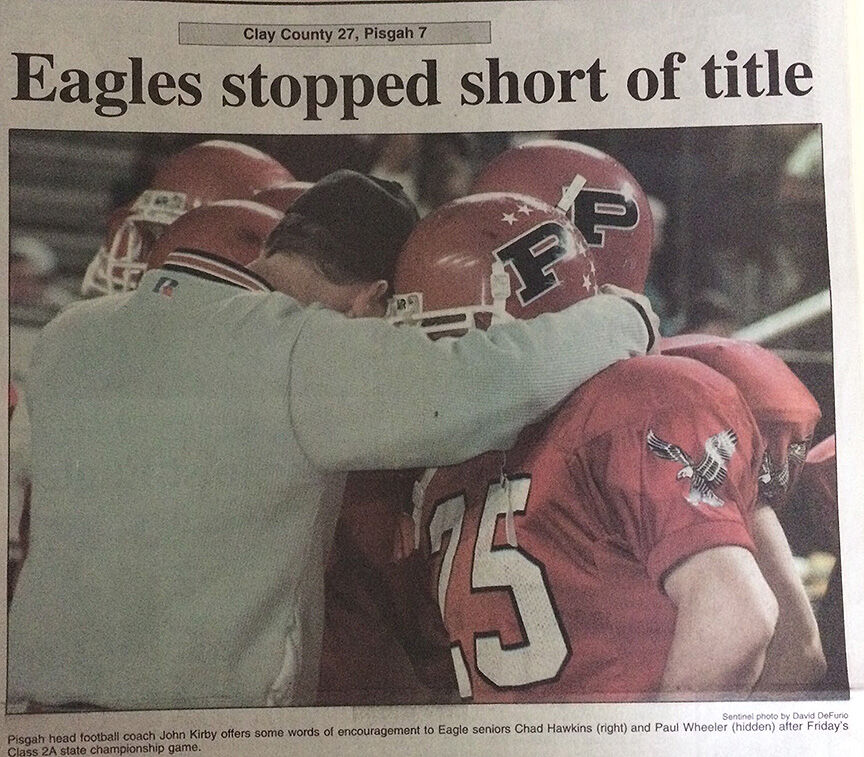 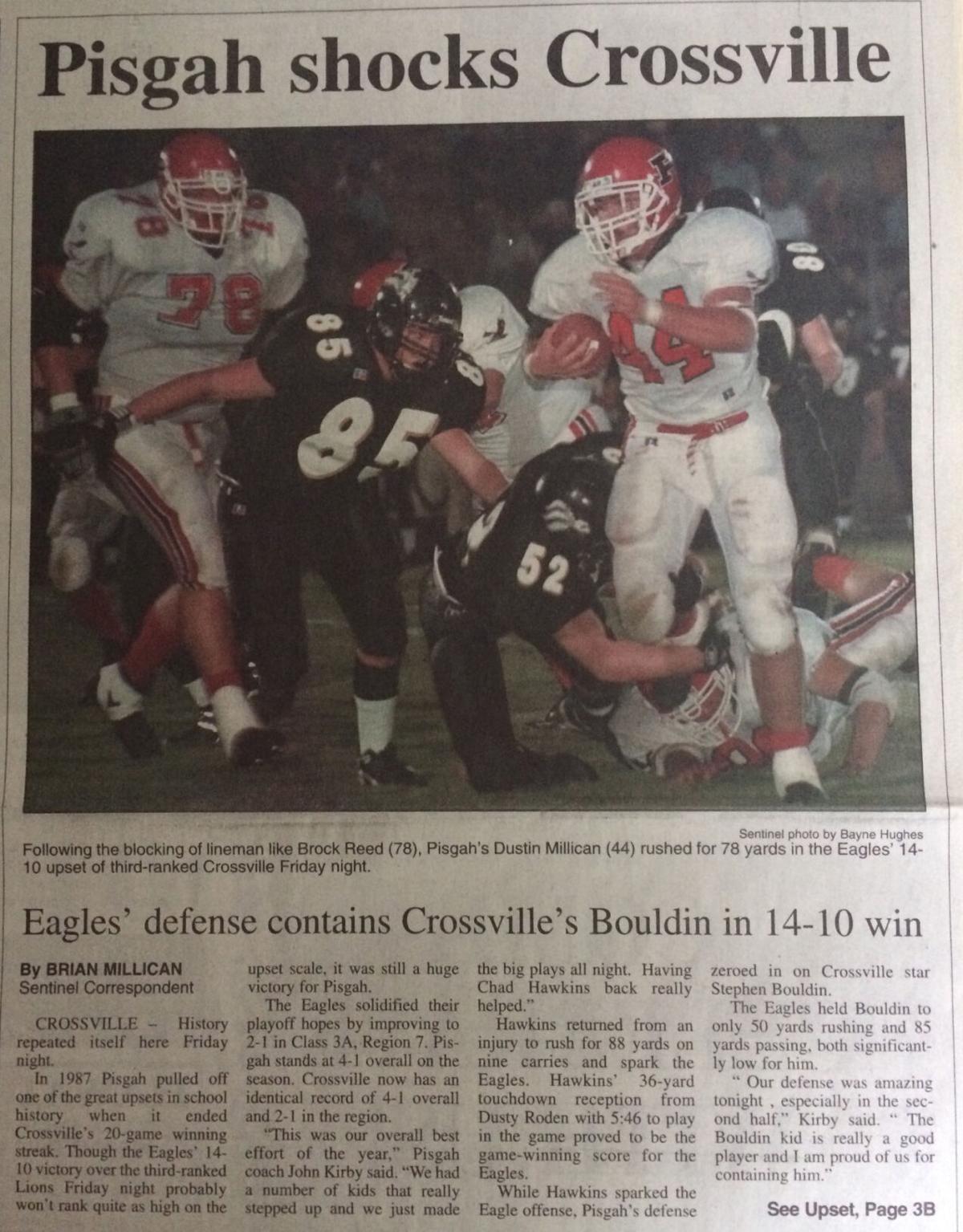 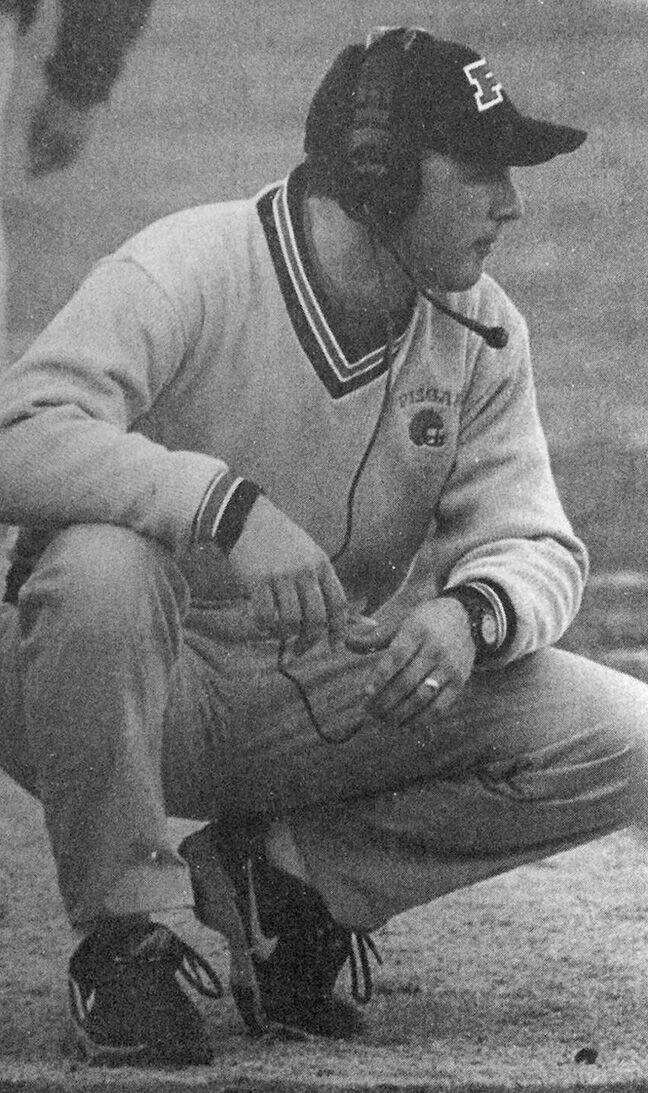 John Kirby looks back and wonders how time passed so quickly.

The most memorable season of his head-coaching career seems like it happened yesterday.

As the century turned on the calendar, so did Pisgah’s fortunes on the football field.

An experienced senior-led and junior-heavy roster was coming back for Pisgah in the year 2000, as the Eagles dropped from Class 3A to 2A.

Instead, Pisgah was focused on turning the season into a special one.

“We had confidence in ourselves, that we’d could be a really good team,” said senior tight end/linebacker Adam Gilbert. “We thought we had a good chance to be special. But how special? I’m not sure.”

“I knew were going to be good,” added Dusty Roden, the Eagles’ starting senior quarterback that season. “But I’d be lying if I told you I thought we’d do what we did.”

What they did was make history.

Five years before Pisgah reached the 2000 Class 2A state championship game, John Kirby arrived at Pisgah late in the summer of 1995, his first head-coaching job after numerous years as an assistant coach at Valley Head, Tallassee and Dade County (Georgia).

But football was ingrained in him at a young age. Kirby’s father, Jim, was a high school football coach, holding the top spot at Sylvania and Valley Head, where his 1984 team, quarterbacked by John, won the Class 1A state championship.

John Kirby had hopes for similar success at Pisgah, but in his first five seasons the Eagles went 1-9, 5-5, 5-8 — the 1997 Pisgah team rallied from an 0-6 start to post the program’s first state quarterfinal appearance in the AHSAA’s five-round playoff format — 1-9 and 4-6.

But as the century changed, so did Pisgah’s fortunes. Kirby knew it was coming.

“We had confidence that we would be good,” Kirby said. We knew were good enough to make the playoffs. We thought that we had a shot to make a run, didn’t know we’d get to the finals, but that was our goal. We’d break the huddle every day with ‘blue trophy’ or  ‘Birmingham’.”

What he did not foresee was becoming Pisgah High School’s principal in the summer of 2000. He got the job three before the start of school, and preseason football practice had just started.

“I never thought about not coaching,” said Kirby, who announced before the season that he would coach the 2000 season before stepping down. “We had everything settled (with assistant coaching duties) and I didn’t want to upset the apple cart. We had a great staff with Jamie (Darwin) and Jeff (Monroe), Heath (Kirby) and (Anthony) Hilley. That semester, with everything I had with both jobs, they did a lot more of the work than I did.”

The 2000 season also brought a format change. The AHSAA replaced its format of 16 areas with eight regions, which doubled the amount of games that would determine playoff teams. The Eagles were placed in a competivie Class 2A Region 7 with Crossville, Fyffe, Gaston, Geraldine, Ider, Sand Rock and Section.

“It was a really tough region,” Kirby said. “Crossville and Geraldine were kind of seen as the top two going in. We thought we’d be good. We knew Fyffe would be improved, and they were. Ider was good. Sand Rock was good. Section and Gaston were scrappy. We had a lot of close ball games in (the region).”

After opening the season with dominant non-region wins over North Sand Mountain 42-0 and Cedar Bluff 48-7, Pisgah slid past Fyffe 20-14 to start region play.

The Eagles then fell 21-14 at home to Geraldine before hitting the road to face No. 3-ranked Crossville the next week. Pisgah trailed 10-7 in the fourth quarter before Roden connected with Chad Hawkins for a 36-yard touchdown pass with 5:46 remaining.

“After losing to Geraldine, for us, the Crossville game was a must to get to play at home (in the first round of the playoffs),” Kirby said. “We went down there and played really good defense and pulled it out at the end. That kind of got us rolling.”

After defeating Gaston 28-3 the following week, Pisgah fell behind visiting Sand Rock 27-7 at halftime in Week 7. But the Eagles rallied, scoring four unanswered touchdowns — Gilbert’s 52-yard touchdown reception from Roden with eight minutes left turned out to be the winning score — before a last-second defensive stand — Dustin  Millican tackled a Sand Rock receiver just short of the goal line as time expired — gave the Eagles an improbable 33-27 comeback victory.

“That kind of told me how good we really could be,” Roden said. “To be able to comeback like that against a good team and win, I think that kind of turned the switch on for us.”

Pisgah defeated Section 32-9 and Ider 21-17 to close region play and Collinsville 32-27 in the regular-season finale before posting playoff wins over West End 20-0 and Vincent 55-15 to reach the state quarterfinals for the second time in school history. The Eagles were set for a rematch with region rival Crossville, this time at home, and this time, in a driving rain and strong, persistent winds.

“We were built to play in the mud. Crossville, they had the Bouldin kid (Steven Bouldin) who could throw it around a little bit,” Kirby said, “so (the weather) was to our advantage.”

No. 9-ranked Pisgah won 12-0, setting up another rematch, this time with No. 10 Geraldine, in the semifinals. The Eagles had not lost since falling to Geraldine in Week 4. Roden remembers a confident team excited for another shot at the Bulldogs.

“We were excited to get to play them again,” he said. “There was a lot of excitement for the game. I remember going to Geraldine and seeing people tailgating. It was Pisgah people tailgating. There were so many people there, looked like five to 10 deep on the fence. Geraldine was really good, but it was our night.”

Pisgah raced out to an 18-0 lead thanks to Millican’s 2-yard touchdown run set up by Hawkins’ 52-yard reception from Roden and two defensive scores, Paul Wheeler’s 39-yard interception return and Matthew Gant’s 39-yard fumble return. Geraldine scored right before halftime to pull within 18-6, but Pisgah regained the momentum from the outset of the second half when Hawkins returned the second-half kickoff 82 yards for a touchdown.

“I remember telling the other coaches that we needed something good to happen for us early in the third quarter,” Kirby said. “Chad Hawkins ran that kickoff back, and Jamie came on the headset and asked was ‘that good enough?’” I was thinking 'yeah, but it didn’t take much time off the clock.'”

After Geraldine cut the deficit to 24-12, Hawkins scored on touchdown runs of 45 and 5 yards to give Pisgah a commanding 38-12 lead entering the fourth quarter.

Geraldine got a late score, but Pisgah was already in celebratory mood by then as its 39-19 victory clinched the school’s first ever trip to the state finals.

“We were so focused,” Gilbert said. “We knew what to expect from them. We changed a few things up on defense. It worked. It was a surreal night.”

A week later, Gilbert and his teammates took the field at historic Legion Field in Birmingham for a state-title matchup with powerhouse Clay County.

The Eagles took a 7-0 lead on Chad Hawkins’ 18-yard touchdown run on the game’s first possession, but No. 3-ranked Clay County held a 12-7 halftime lead. Backed up near its own end zone, Pisgah saw Clay County return a punt for a touchdown to make it a two score game in the third quarter. Clay County added another score to win its fourth state championship in seven seasons with a 27-7 victory.

“We played really well in the first half but kind of ran out of gas,” Kirby said. “We played the whole second half backed up on our end and it was hard to attack them.”

Pisgah did not come home with the state championship trophy, the trophy it wanted. But two decades later, Kirby said the outcome does not lessen the accomplishment that season was.