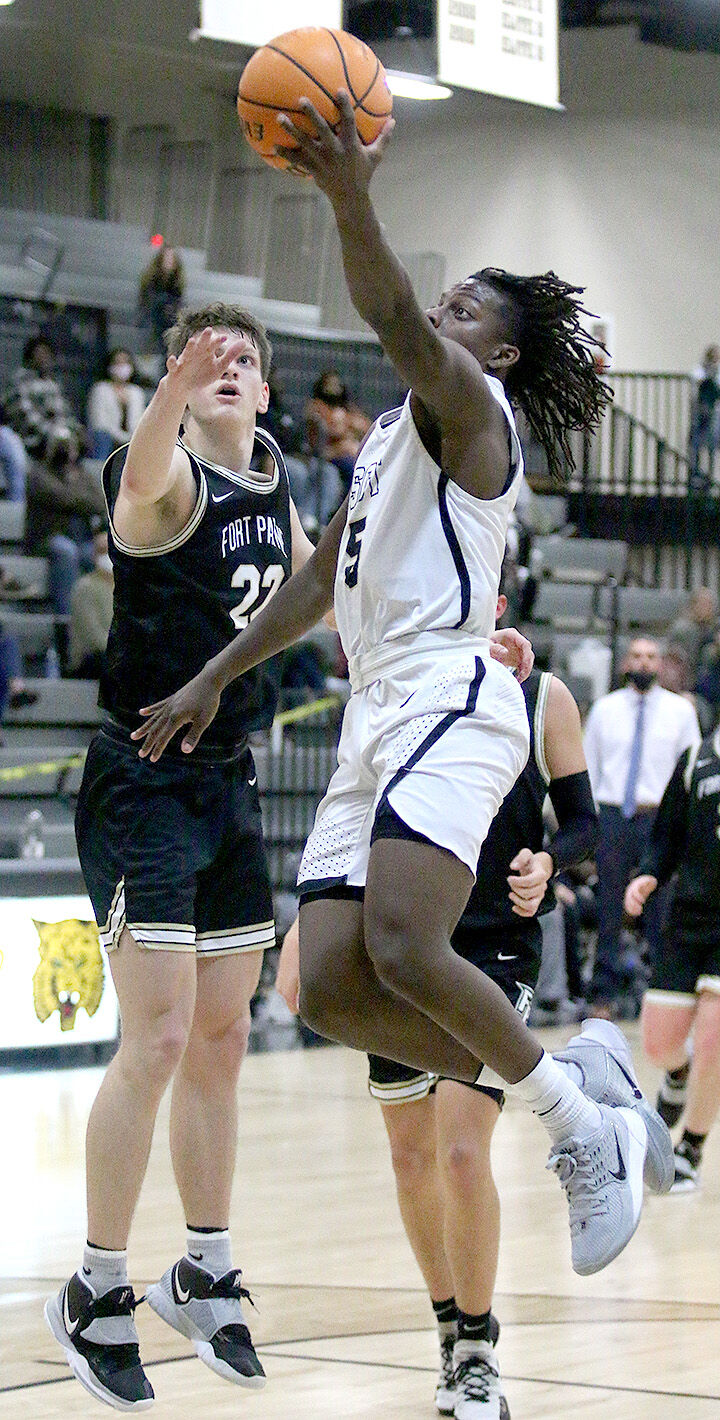 BJ Harris soars in for a layup as Fort Payne's Lane White tries to alter the shot during Scottsboro's 80-71 win in the Class 6A Area 15 Tournament semifinals Tuesday night at Scottsboro's Hambrick Hall. 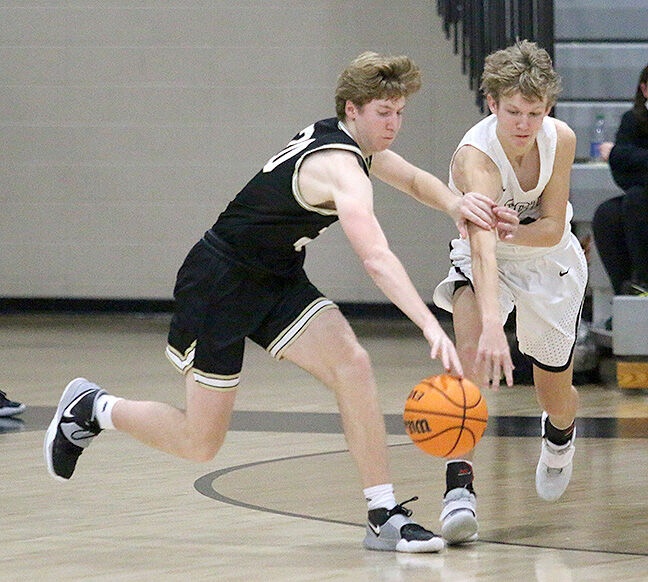 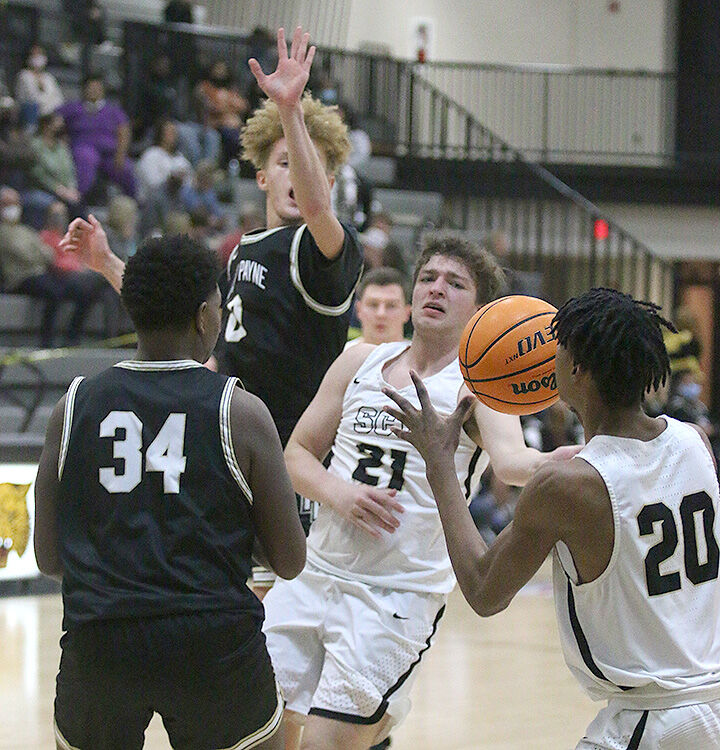 Seth Whitmire (21) dishes a pass to teammate Cordell Worthy (20) for a basket during Scottsboro's 80-71 Class 6A Area 15 Tournament semifinal win. 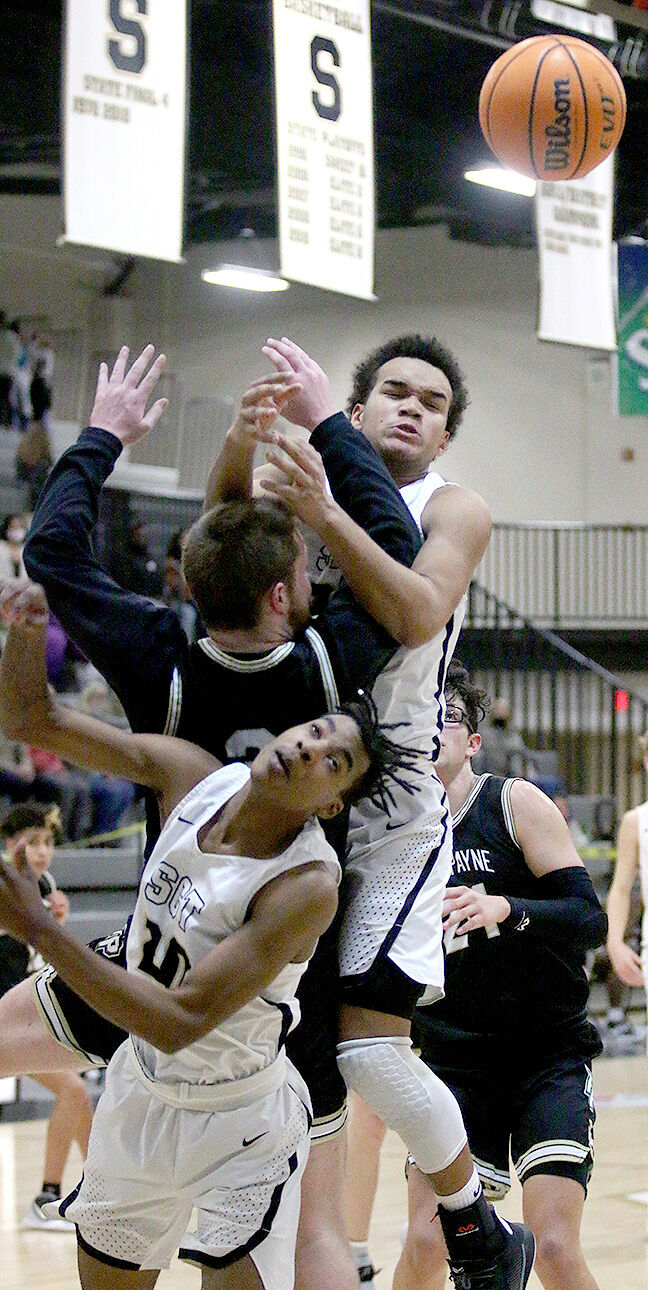 BJ Harris soars in for a layup as Fort Payne's Lane White tries to alter the shot during Scottsboro's 80-71 win in the Class 6A Area 15 Tournament semifinals Tuesday night at Scottsboro's Hambrick Hall.

Seth Whitmire (21) dishes a pass to teammate Cordell Worthy (20) for a basket during Scottsboro's 80-71 Class 6A Area 15 Tournament semifinal win.

The Scottsboro varsity boys basketball team will play for an area championship.

The top-seeded Wildcats built a big first-half lead before overcoming foul trouble and a valiant rally attempt by fourth-seeded Fort Payne to post an 80-71 win over its TopCat rival in the Class 6A Area 15 Tournament semifinals Tuesday night at Scottsboro High School’s Hambrick Hall.

Scottsboro (21-4) won all three meetings with Fort Payne this season. It was the second time the Wildcats defeated Fort Payne by an 80-71 score at Hambrick Hall.

“The one seed vs. four seed in our area doesn’t really mean anything,” said Scottsboro head coach Jason Bell. “Every game is a dog fight.”

Scottsboro advanced to an area championship game clash with second-seeded Buckhorn on Friday at 6 p.m. at Hambrick Hall. The Bucks defeated Arab 60-32 in Tuesday’s other area tournament semifinal game.

Scottsboro and Buckhorn split their regular-season meetings. Scottsboro lost 73-72 at Buckhorn in December before defeating the Bucks 76-73 in overtime at Scottsboro last month.

“Played them twice and four points has separated us in two games,” Bell said. “It’s going to be another one like that. We’re going to play hard (and) they’re going to play hard. We hope we can make one more basket or one more free throw than them at the end. The good thing is it’s not do-or-die for either one of us.”

Tuesday’s game with Fort Payne was do-or-die, and both teams played with that urgency.

Scottsboro was blazing hot from the start, making five of its first six shot attempts on the way to building a 22-4 lead after one quarter before ultimately leading by as many as 24 points in the second quarter. But foul trouble and Fort Payne’s free-throw shooting accuracy slowed Scottsboro’s momentum, allowing Fort Payne to pull within 50-33 at halftime. Fort Payne made 16 of 21 free throws in the second quarter and 22 of 27 for the game.

Fort Payne continued its rally in the second half, spurred on by senior Lane White, who scored 15 third-quarter points to help trim Scottsboro’s lead to 63-55 by quarter’s end. Fort Payne got as close as five with 2:44 left to play in the game, but Scottsboro responded with Tyson Sexton’s runner, Parker Bell’s 3-pointer, BJ Harris’ two free throws and Sexton’s press-beating layup off a pass from Jordan Davis to run its lead to 77-67 with 1:01 remaining. Fort Payne never got closer than seven the rest of the way.

Scottsboro, which improved to 13-0 at home this season, had four players score in double figures. Parker Bell sank a six 3-pointers and closed with 23 points while Harris had 20 points, Davis had 13 and Sexton had 10. Off the bench, Cordell Worthy added six points while Kyle Wright had three and Blake Jones and Seth Whitmire had two each.

“Our bench kids, can’t say enough about the way they played in the first half,” Jason Bell said. “We got in such foul trouble, and our bench kids did a phenomenal job in the second quarter to keep us (in the lead) in the game. We didn’t stop (Fort Payne) much that second quarter, but our bench kids scored with them.”

White finished with a game-high 36 points for Fort Payne, which closed its season with an 11-16 record. Fort Payne also got 12 points from Will Abbott, 10 from Eli Kirby and eight from Bryson Richey.