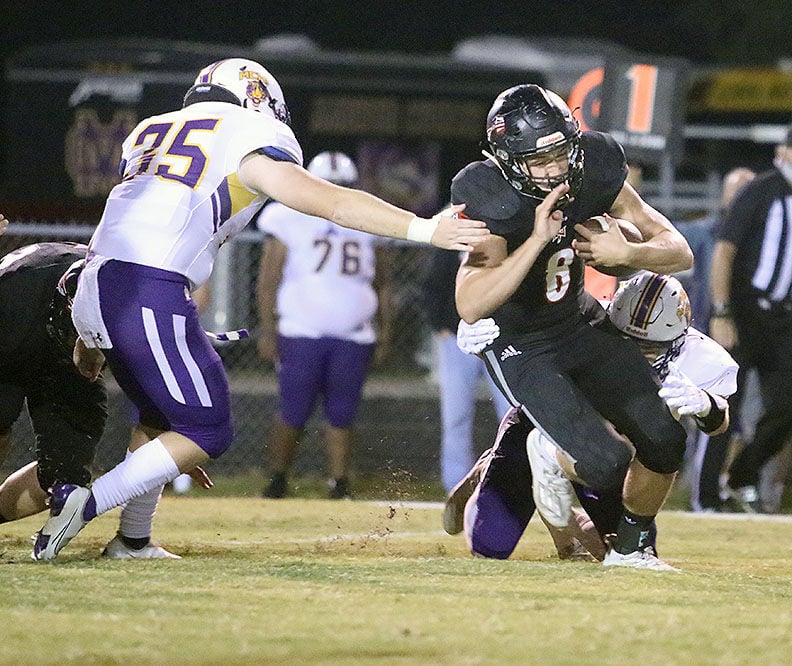 North Jackson's Johnny Gilliam tries to break away from a Madison County defender. 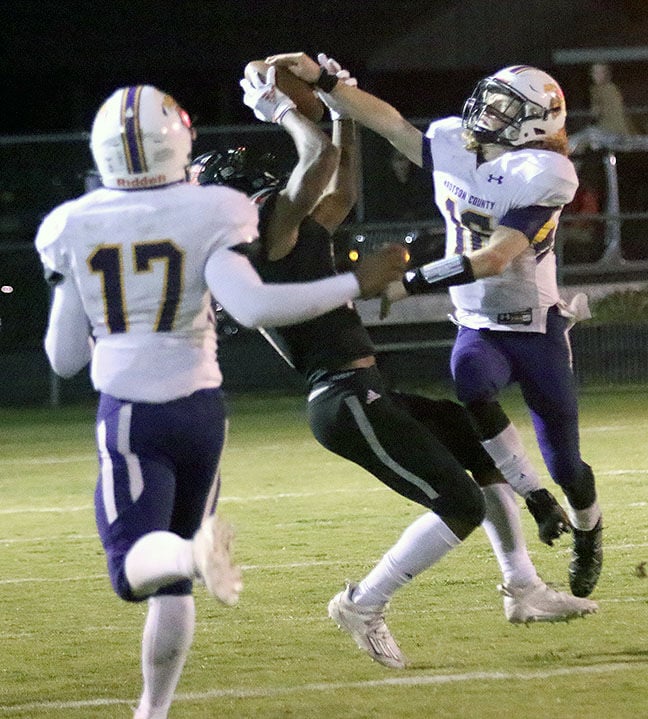 Nigel Lanier (middle) makes a catch in traffic against Madison County during North Jackson's' 27-18 loss to the Class 4A No. 6-ranked Tigers Friday night.

North Jackson's Johnny Gilliam tries to break away from a Madison County defender.

Nigel Lanier (middle) makes a catch in traffic against Madison County during North Jackson's' 27-18 loss to the Class 4A No. 6-ranked Tigers Friday night.

North Jackson could not get off the schneid at homecoming Friday night.

The Chiefs failed to score in the second half for the third straight game, as a halftime lead slipped  away to Class 4A No. 6-ranked Madison County Friday night at R.D. Hicks Stadium in Stevenson.

“(Madison County) is a good team, and they did a great job,” said Tygard. “Our kids fought hard the whole game. We had a good attitude and we played hard, but he just didn’t make the plays.”

The Tigers got on the scoreboard first when Isaiah Perdue punched it in from two yards. The score came after North Jackson’s previous drive ended on downs. Quarterback Ramiro Towers’ two-point attempt was no good. Tygard said the “game-changing” play happened on the ensuing drive. North Jackson (3-3, 2-2) had driven 88 yards down the field, and it had the ball on the goal line. Dalton Morris tried a quarterback sneak, but the ball was knocked loose and Madison County (6-1, 4-0) recovered the fumble.

“It’s a totally different game if we score right there,” said Tygard.

North Jackson would tie the game early in the second quarter. After forcing a punt, the Chiefs put together a nine play, 36-yard scoring drive. On the scoring play, Morris was flushed out of the pocket, and flipped the ball to Johnny Gilliam, who broke several tackles on his way to the end zone. North Jackson recovered an onside kick but was forced to punt. Madison County punted on its next possession. Nigel Lanier caught the punt, weaved in and out of defenders and broke tackles on his way to the end zone. North Jackson took its first lead of the game on the 60-yard return. Madison County answered with a Braydon Parton touchdown run with 2:20 left in the half. North Jackson got the ball back with two minutes and some change to go before halftime. It moved quickly down the field thanks to Lanier receptions of 14, 10 and 36 yards. Gilliam scored with 13 seconds left, and North Jackson took at 18-13 lead into halftime.

Of North Jackson’s six offensive possessions in the second half, four ended on downs and two ended with a turnover. North Jackson turned it over on downs from the 10, 25, 43 and 17 yard lines. Tygard said it is hard for his team to score in the red zone.

“The red zone offense is hard,” said Tygard. “There’s not a lot of room to throw down there, and when you don’t have a field goal kicker, it makes it even more tough.”

Madison County scored on a Parton run in the third and a Perdue run in the fourth.

Tygard said his team can still clinch the three seed in Class 4A Region 7, but they have some work to do.

“We’re trying to teach our guys how to win, and it’s hard when you don’t,” said Tygard.