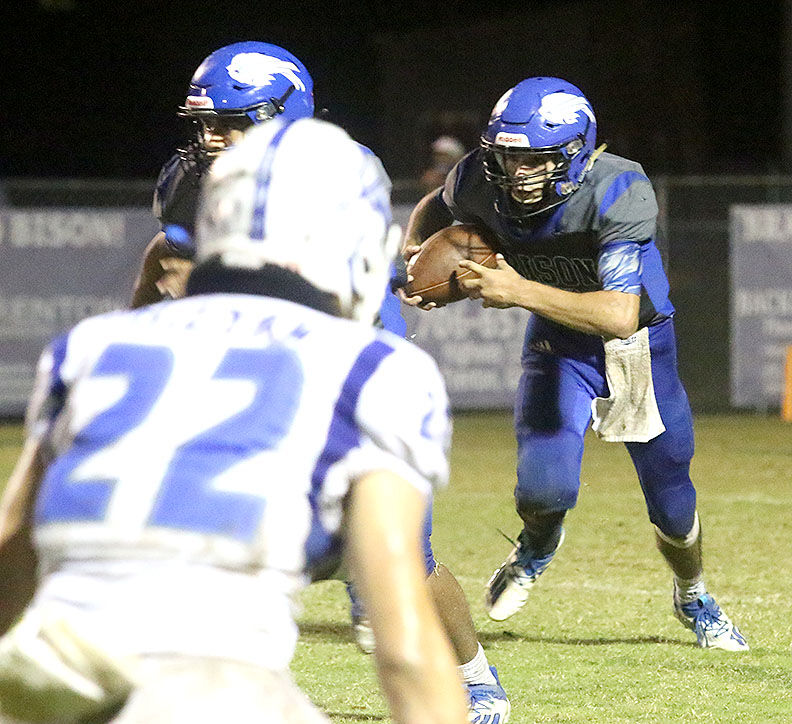 Lake Bell (right) runs behind the blocking help of teammate Fernando Luna during No. 9-ranked NSM's 12-7, Class 2A Region 7 championship clinching win over No. 8 Falkville. 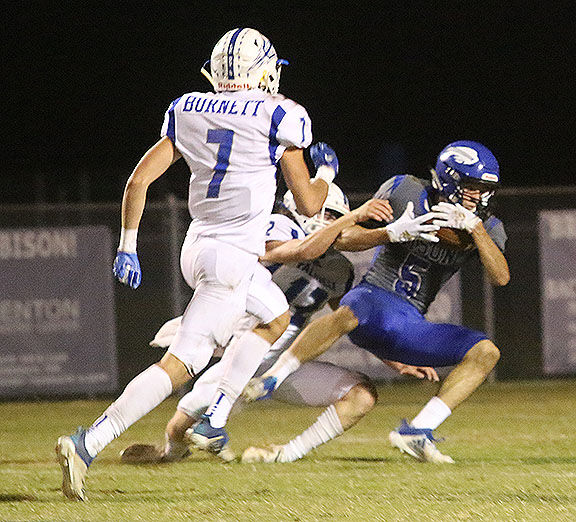 NSM's Derek Bearden (5) hauls in a catch for a long gain during NSM's 12-7 win over Falkville Friday night. 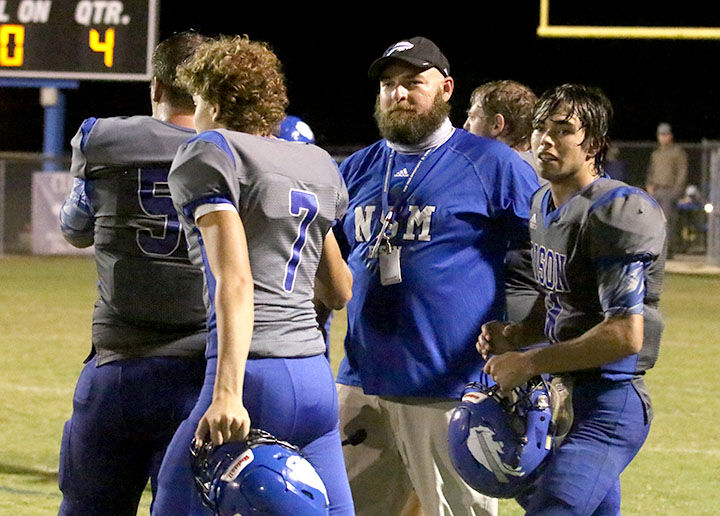 NSM head coach Keith Kirby (center) celebrates with players, including Nyle Poore (7) and Lake Bell (right), after the No. 9-ranked Bison defeated No. 8 Falkville 12-7 to win the Class 2A Region 7 championship.

Lake Bell (right) runs behind the blocking help of teammate Fernando Luna during No. 9-ranked NSM's 12-7, Class 2A Region 7 championship clinching win over No. 8 Falkville.

NSM's Derek Bearden (5) hauls in a catch for a long gain during NSM's 12-7 win over Falkville Friday night.

NSM head coach Keith Kirby (center) celebrates with players, including Nyle Poore (7) and Lake Bell (right), after the No. 9-ranked Bison defeated No. 8 Falkville 12-7 to win the Class 2A Region 7 championship.

The North Sand Mountain football program has risen to new heights over the past decade, but one thing throughout that rise had eluded them.

Class 2A No. 9-ranked NSM edged No. 8 and previously undefeated Falkville to win the Class 2A Region 7 championship at Lloyd Dobbins Field in Higdon.

It’s the first region/area title in the 55-year history of the program.

When the final horn sounded, NSM head coach Keith Kirby just put his fist in the air. He knew his team had just made history.

“We’re tickled to death,” said Kirby. “This win means a lot. It means a lot to these kids. They’ve worked their tails off. We’re happy to get the job done.”

“This means the world,” said NSM senior Lake Bell. “I’ve started all four years, and every team has taught me something different. To come out here and work as hard as we do and it pay off, it just means the world.”

NSM (8-1, 6-0) will host Southeastern in the first round of the playoffs. The Bison reached the state quarterfinals a year ago, but started that run on the road. NSM last hosted a first-round playoff game in 2016.

“We’ve been on the road in the first round the last few years,” said Kirby. “It feels good to get one at home.”

The biggest play of the game happened with 3:10 left in the game. Falkville (8-1, 5-1) recovered a fumble near midfield and drove the ball down the field. The NSM defense was faced with a fourth-and-three from the 30-yard line. Falkville running back Christian Angulo took the direct snap, but he was stopped before he could make the line to gain.

“That was huge,” said Kirby. “(Our defense) made stops all night.”

Bell, who also plays defense, told his team the fourth down play would be one they would always remember.

“I told them this would be a story they would tell their kids. We’ve worked for it, and opportunities like that, you gotta love them,” said Bell.

That defense held a potent Falkville offense, which came in averaging 43 points per game, to 172 total yards and seven points.

Both teams were held scoreless until the end of the first quarter. Bell hit Bearden on a fourth down from midfield, and Bearden broke a couple tackles and found his way to the end zone for a 6-0 NSM lead.

NSM had the ball inside the 10-yard line three times in the second quarter. Two of those possessions ended with an interception in the end zone. NSM got the ball back each time on an interception and a fumble recovery. On the final possession before the half, Bell connected with Mason Smith for a 9-yard touchdown. NSM’s two-point attempt was unsuccessful. The Bison led 12-0 at the half.

Falkville forced a punt, and took over with 7:26 left in the third quarter. It held the ball for the rest of the quarter. On the first play of the fourth quarter, Angulo punched it in to cut the NSM lead to five. Falkville had two other opportunities to score, but were stopped by the NSM defense both times.

Bearden had an interception and Logan Davis recovered a fumble on the defensive side of the ball.