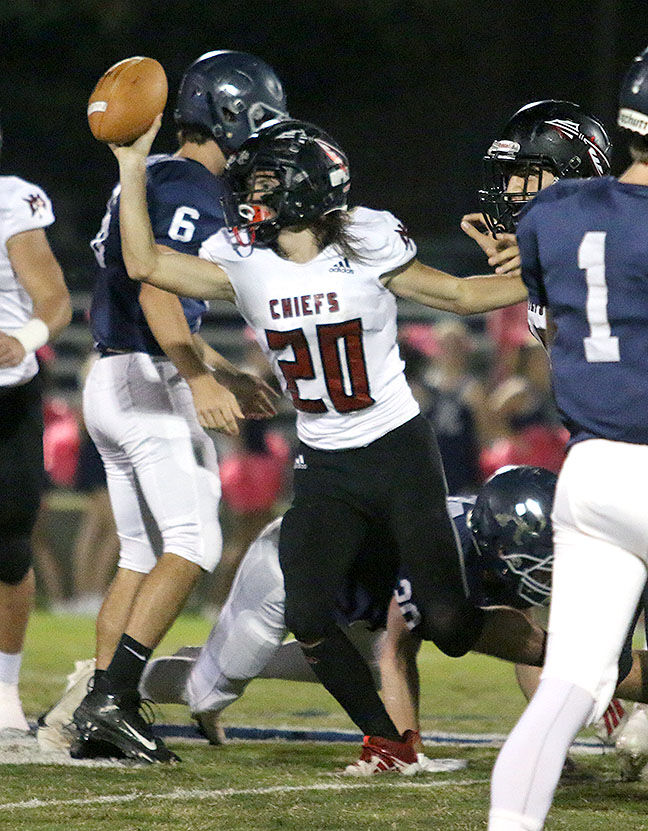 Kyle Posey celebrates after recovering an onside kick for North Jackson on the opening kickoff of North Jackson's 43-24 win at Randolph. 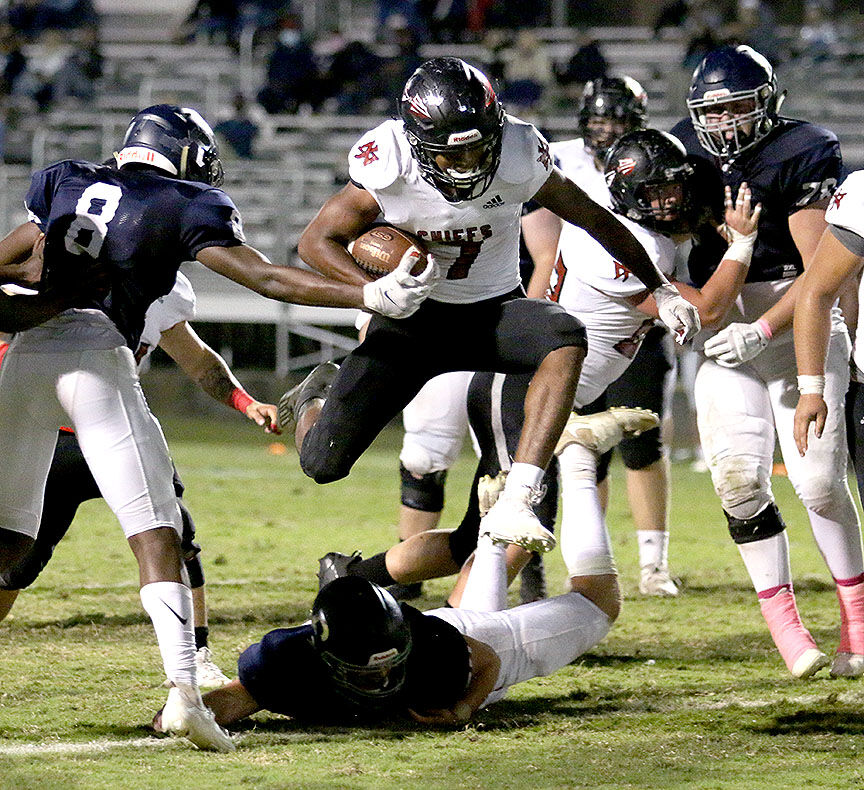 Nigel Lanier leaps over a Randolph defender and into the end zone for one of his three rushing touchdowns during North Jackson's 43-24 Class 4A Region 7 win Friday night in Huntsville. 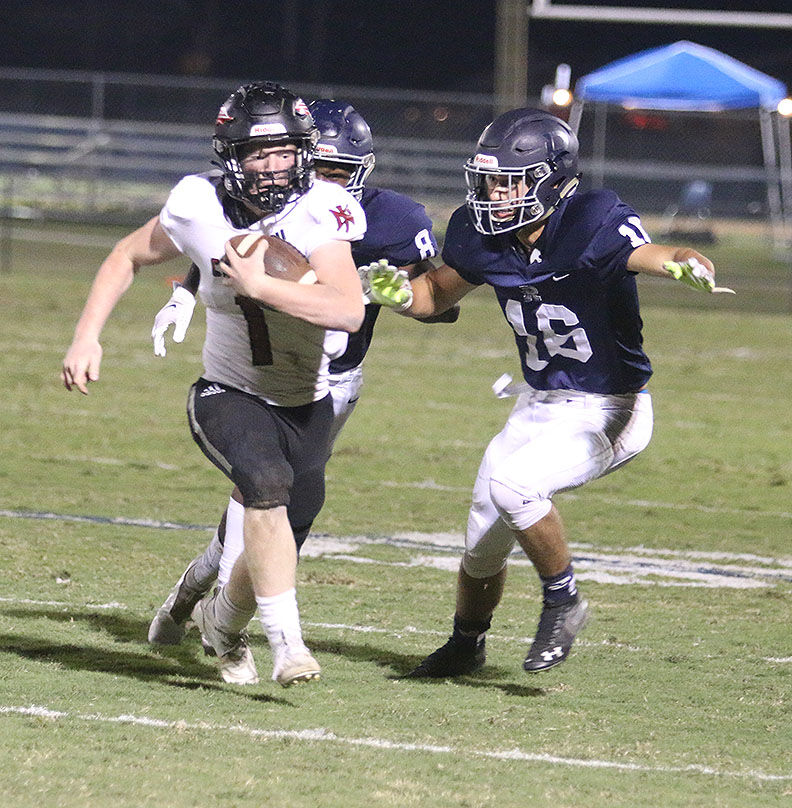 Macklin Guess (1) returns an interception during North Jackson's 43-24 win over Randolph. Guess had two interception and a team-high eight tackles for the Chiefs. 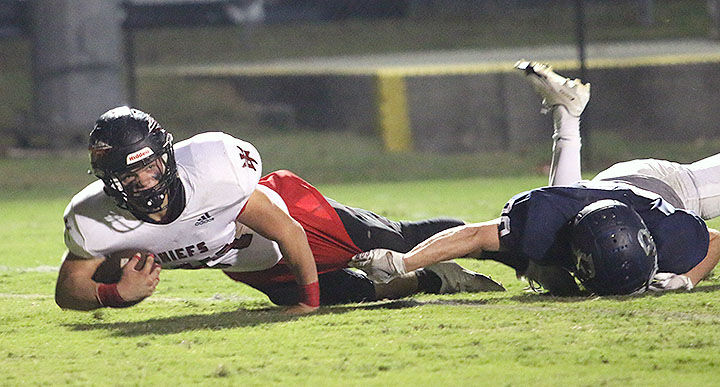 Ryland Matthews stretches across the goal line for a touchdown during North Jackson's 43-24 Class 4A Region 7 win over Randolph. 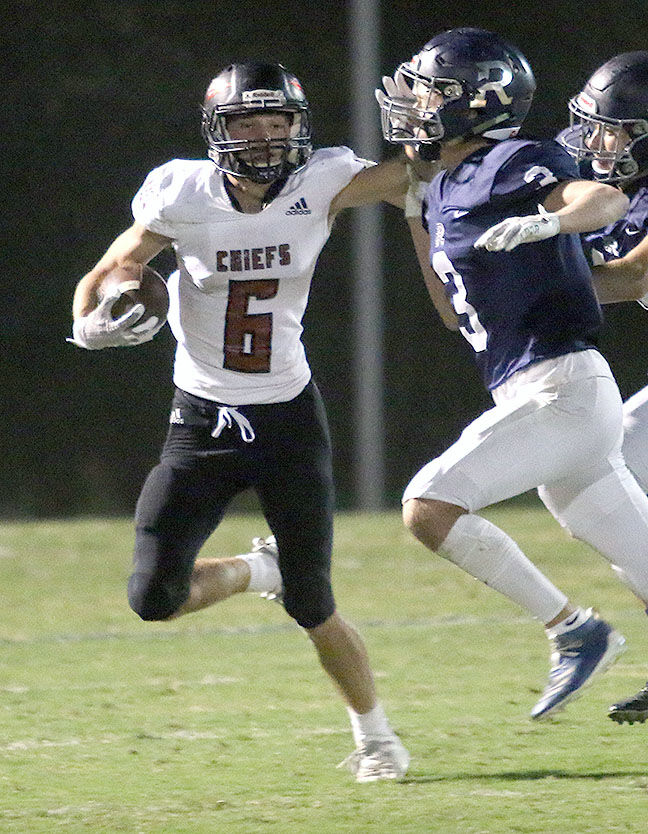 Kyle Posey celebrates after recovering an onside kick for North Jackson on the opening kickoff of North Jackson's 43-24 win at Randolph.

Nigel Lanier leaps over a Randolph defender and into the end zone for one of his three rushing touchdowns during North Jackson's 43-24 Class 4A Region 7 win Friday night in Huntsville.

Macklin Guess (1) returns an interception during North Jackson's 43-24 win over Randolph. Guess had two interception and a team-high eight tackles for the Chiefs.

Ryland Matthews stretches across the goal line for a touchdown during North Jackson's 43-24 Class 4A Region 7 win over Randolph.

But the Chiefs reversed their second-half fortunes Friday night to get back in the win column.

North Jackson (4-3, 3-2) recovered four onside kicks, had success dabbling with an old-school offensive formation and held Randolph to just one second-half score to earn a 43-24 Class 4A Region 7 victory Friday night in Huntsville.

“It’s big for us to get back on the winning track,” Tygard said.

The Chiefs’ philosophy to onside kick on each kickoff paid off handsomely, resulting in four extra possessions. North Jackson scored immediately after recovering three of them.

“Our kicker from Spain, he was huge,” Tygard said of kicker Paul Marteaux. “We got four onside kicks and he kicked all of his extra points. It’s just demoralizing to someone when you (recover an onside kick). We got them and we did something with them.”

Lanier took the snap from center as the Chiefs’ lined-up in the single-wing formation, a wrinkle North Jackson added to help alleviate some of its red-zone issues.

“We busted that out this week because I got tired of being stopped on the 10-yard line,” Tygard said. “I said ‘who are biggest, baddest guys we’ve got and let’s put them out there together,’ and we did. When you can run the ball down there it makes things so much easier.”

Cade Reed recovered the ensuing onside kick to steal another possession from Randolph, and the Chiefs went up 15-0 when Posey caught Dalton Morris’ pass near the Randolph 5-yard line, broke a tackle and ran into the end zone followed by Myron Walton’s two-point conversion run with 8:07 left in the first quarter.

Randolph (3-5, 1-4) pulled within 15-6 midway through the first quarter, but Brady Cunningham’s 38-yard touchdown catch from Morris gave North Jackson a 22-6 advantage one minute into the second quarter.

But Randolph fought back, blocking a North Jackson punt and recovering it in the end zone for touchdown midway through the second quarter before Nic Strong’s 42-yard touchdown catch from Andrew Hunter got the Raiders to within 22-18 with 41 seconds left in the first half.

With Randolph grabbing momentum before halftime, Tygard said the Chiefs were getting an all too familiar feeling for a team that had failed to score in the second half of its last three games after leading No. 2-ranked Madison Academy and No. 5 Madison County and being tied with Scottsboro.

“They had us worried there at halftime (because) we were doing the same thing,” Tygard said, adding that the message at halftime was “we’ve got to finish a game. Somebody had to step up and be a leader. The offensive line did. The kicker did. The running backs, all of them, did.”

North Jackson went three-and-out and then turned the ball over on downs at the Randolph 16-yard line on its first two drives of the second half, but the Chiefs finally broke its second-half scoreless streak when Lanier capped a nine-play, 70-yard drive with a 5-yard touchdown run to extend the lead to 29-18 late in the third quarter.

Cunningham then recovered the ensuing onside kick, and Lanier was back in the end zone six plays later with another 5-yard touchdown run to stretch the Chiefs’ lead to 36-18. Cunningham then recovered another onside kick, but that drive ended with a fumble deep in Randolph territory. But after forcing the Raiders to punt, North Jackson drove 52 yards to salt the game away on Ryland Matthews’ 8-yard touchdown run. Randolph capped the scoring with a touchdown pass with just over five minutes remaining.

North Jackson finished with 431 total yards, including 282 on the ground. The Chiefs, playing without injured leading rusher Johnny Gilliam, had four players rush for 45 or more yards. Walton ran for 77 yards on 14 carries while Lanier had 76 yards on 14 carries, Matthews had 68 yards on 12 carries and Kilan Summer had 47 yards on nine carries.

Defensively for the Chiefs, Macklin Guess had a team-high eight tackles and two interceptions while Lanier had six tackles and Nick Jernigan had five tackles and blocked two PATs.

The win put North Jackson on track to be the region’s No. 3 seed in the playoffs should it continue to win.

“If we win these next two, we’ll be the three seed. And if we win that first (round playoff) game, we’re going to host the next two rounds,” Tygard said. “We’re trying to make a run. If we just build confidence, we’re as good as anybody.”