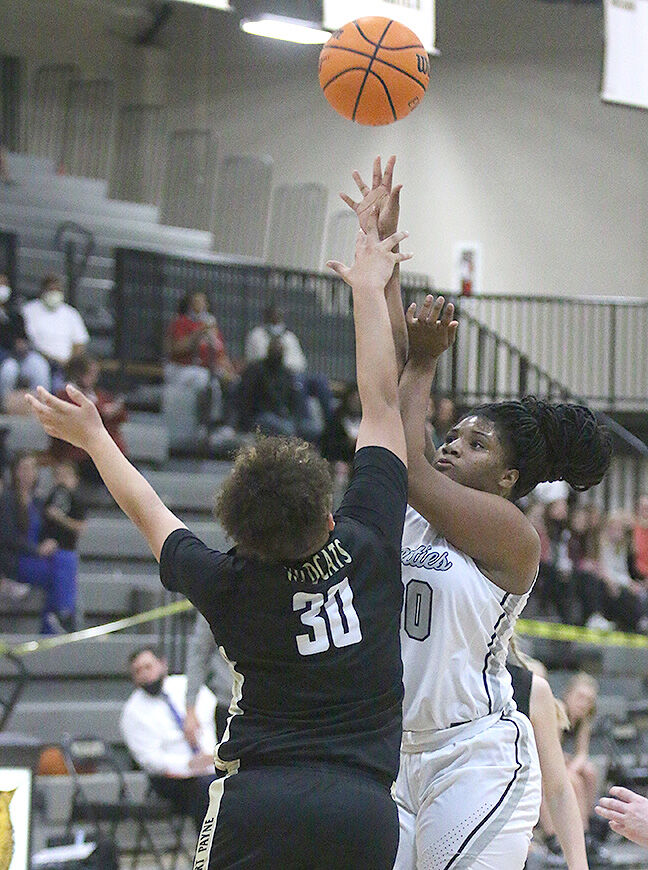 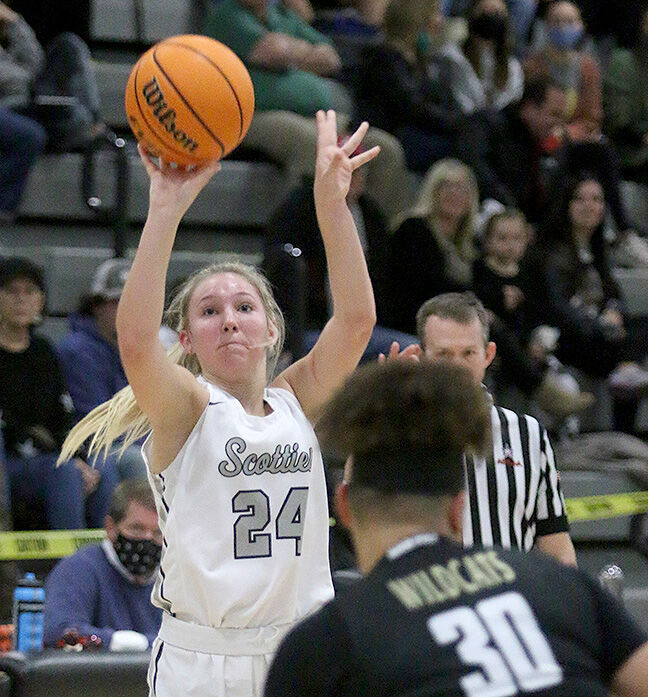 Audrey Holland shoots for three of her game-high 19 points during Scottsboro's 48-43 Class 6A Area 15 Tournament semifinal win over Fort Payne.

Audrey Holland shoots for three of her game-high 19 points during Scottsboro's 48-43 Class 6A Area 15 Tournament semifinal win over Fort Payne.

But Scottsboro head coach Brandon Childers wasn’t worried that the slide would affect the Wildcats’ focus for the start of area tournament play.

“It was a tough (stretch),” Childers said. “But we’ve got good seniors, good leaders, and they didn’t let anybody drop their heads. I knew we’d be OK.”

The win sends Scottsboro (15-7) into an area championship game matchup at top-seeded and No. 8-ranked Buckhorn in New Market Thursday at 6 p.m.

Buckhorn (19-4) advanced by defeating fourth-seeded Arab 58-37 in Monday’s other semifinal.

The area champion will host a Northwest Sub-regional game while the area runner-up must travel.

“We knew it was going to come down to a possession or two either way,” Childers said. “The other two games did, why wouldn’t this one. We told the girls whoever wanted to win badly enough probably would. Down the stretch, we got some big offensive rebounds that were the difference I think.”

Scottsboro held leads of 15-12 after one quarter and 30-28 at halftime before stretching its lead to 39-32 entering the fourth quarter.

Fort Payne got as close as 44-41 with 1:36 remaining and then missed a pair of free throws that would have cut the Scottsboro lead to one. After the second missed free throw, Fort Payne had to foul Scottsboro five times to get Scottsboro into the 1-and-1 free-throw bonus. That allowed Scottsboro to burn more than 30 seconds off the clock, and Audrey Holland sank a free throw to give Scottsboro a 47-43 lead with 19.5 remaining. After Fort Payne missed a 3-pointer in the closing seconds, Holland sank another foul shot to seal the victory.

Logan Neil finished with 15 points for Fort Payne while Brylan Gray had 10, Graiden Hass had seven, Sydney Hickman had six and Abby Boatwright had five.

“To hold (Fort Payne) to 15 points in the second half is really good,” Childers said. “They do a lot of good stuff offensively. We did a good job of reading and calling out what they were going to run and defending it in the second half.”

The win advanced Scottsboro to an area tournament championship game for a fifth straight season.

“We know Buckhorn is good, we know they’re tough, but we’re proud to be (in the finals),” said Childers, whose team is 0-2 against the Bucks this season. “We’re going to do everything we can these next two days to prepare for them.”