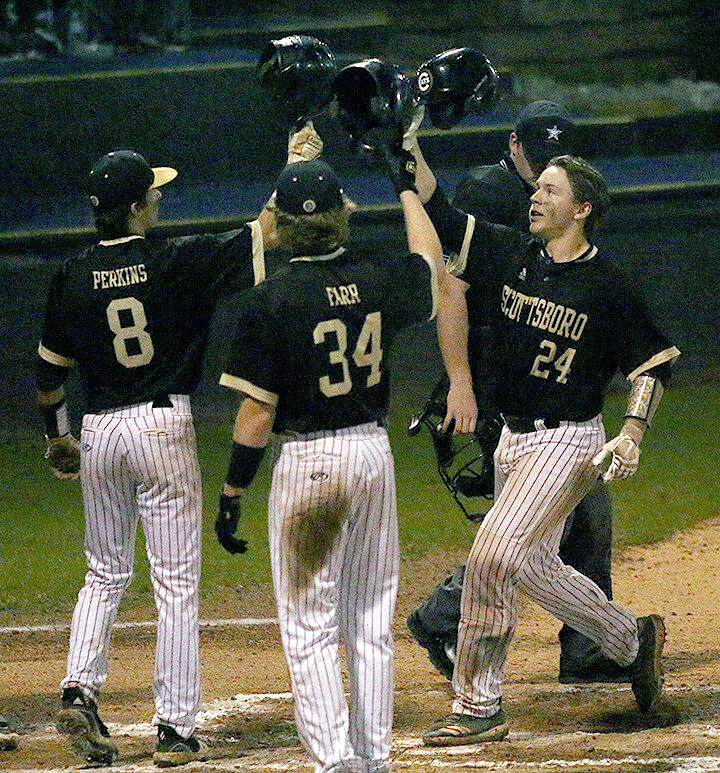 Ethan Wininger (24) is congratulated by teammates Collin Perkins (8) and Waylon Farr (34) after hitting a three-run first-inning home run during Scottsboro's 10-0 win over Arab on Friday. 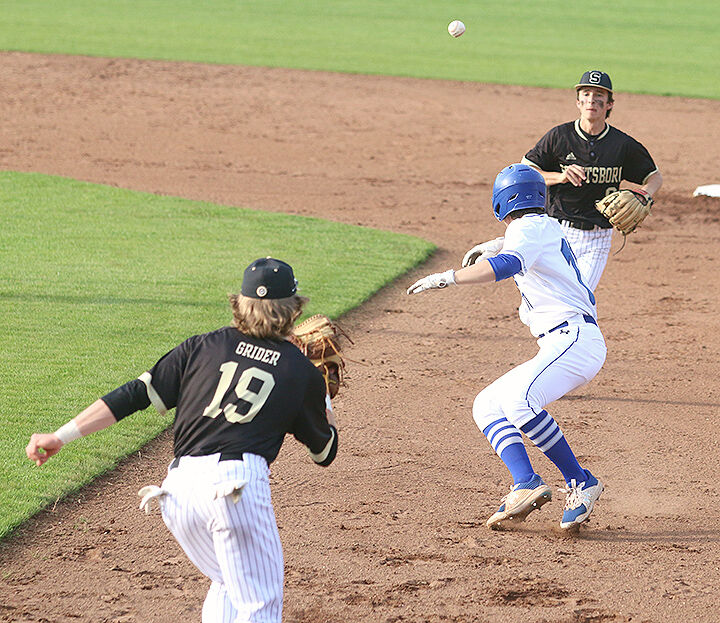 Scottsboro's Collin Perkins and Landon Grider (19) get an Arab runner in a rundown for an eventual out during the teams' doubleheader on Friday.

Ethan Wininger (24) is congratulated by teammates Collin Perkins (8) and Waylon Farr (34) after hitting a three-run first-inning home run during Scottsboro's 10-0 win over Arab on Friday.

Scottsboro's Collin Perkins and Landon Grider (19) get an Arab runner in a rundown for an eventual out during the teams' doubleheader on Friday.

Arab tried not to give Ethan Wininger a pitch to hit last Tuesday, and the result was a game-winning RBI walk.

On Friday, the Knights were a little more aggressive with Wininger standing in the batter’s box with runners on base.

And for the second time in a four-day span, though in a much different way, Wininger made the Knights pay again.

“(Wininger) runs the ball out of the yard there in the first inning -- that set the tone for us,” said Scottsboro head coach Jess Smith. “I think that loosened all of us up. Great start to the game.”

Game 3 was played after Scottsboro lost 9-3 in Game 2, an eight-run fourth inning erasing what was an early 1-0 Wildcat lead.

Smith said the message in between games was to “relax and play baseball, go play our game.”

After Wininger’s first-inning homer, the Wildcats scored on an Arab throwing error in the third before getting four runs in the fourth on Collin Perkins’ RBI double, Connor McLaughlin’s RBI single, an Arab error that plated a run and Waylon Farr’s RBI single. Perkins’ two-run single pushed the Scottsboro lead to 10-0 in the top of the fifth.

Perkins finished 2-for-3 with three RBIs and McLaughlin was 2-for-4 with an RBI while Wininger homered, Farr singled, walked twice and drove in a run, Sam Bryant singled, walked and scored two runs and Camden Matthews singled and walked.

“Offensively, we did a lot of good things,” Smith said. “We were a little more patient, getting in better counts to hit.”

McLaughlin pitched four innings, allowing only three hits and two walks while recording six strikeouts before giving way to A.J. Crocker to finish it with a two-strikeout final inning.

“Connor McLaughlin was excellent on the mound,” Smith said. “He threw two pitches for a strike and located with his fastball.”

Smith was proud of the way the Wildcats bounced back from the Game 2 defeat.

“It was big for our team, in a Game 3, to respond the way we did,” he said. “It was awesome to see our guys respond like they did and not blink. Couldn’t ask for a better response in a Game 3 against a really good team.”