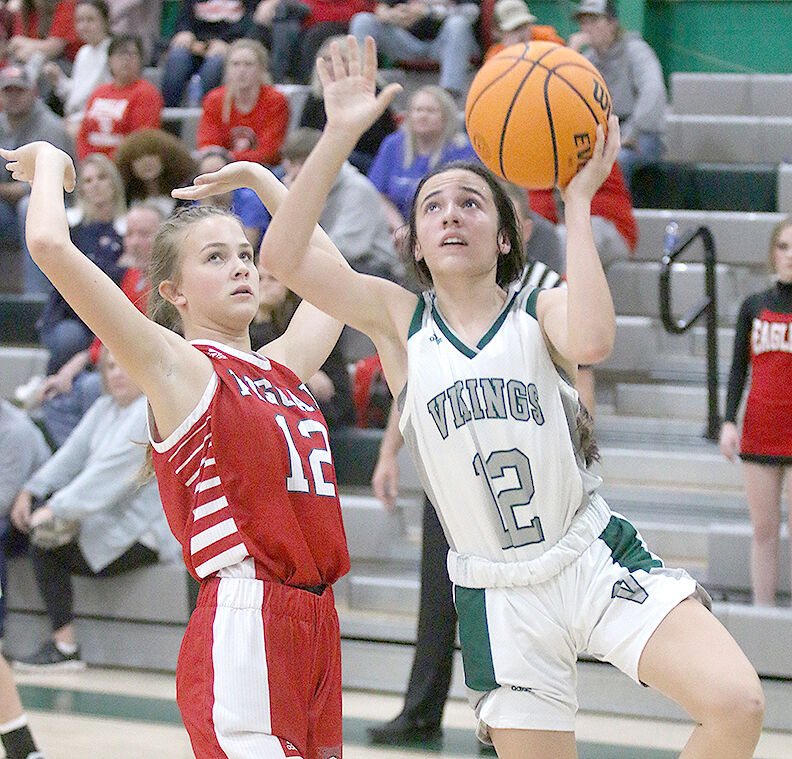 Kaina King (right) gets past Pisgah's Piper Anderson for a basket during Skyline's 55-53 win Thursday night. 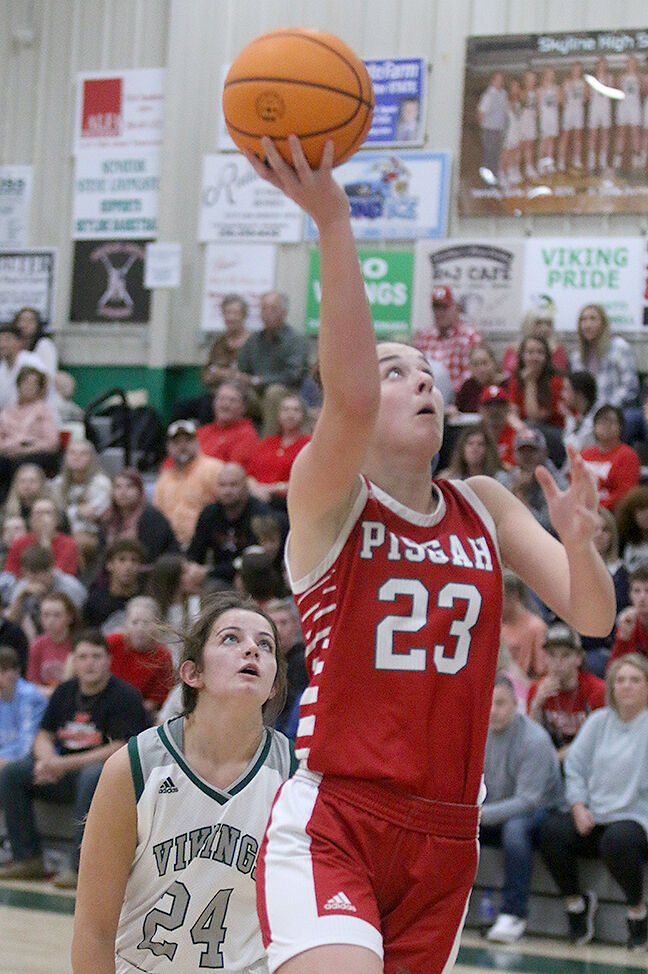 Molly Heard scores two of her game-high 27 points during Pisgah's 55-53 overtime loss to Skyline. Heard surpassed the 2,000 career point mark during the contest. 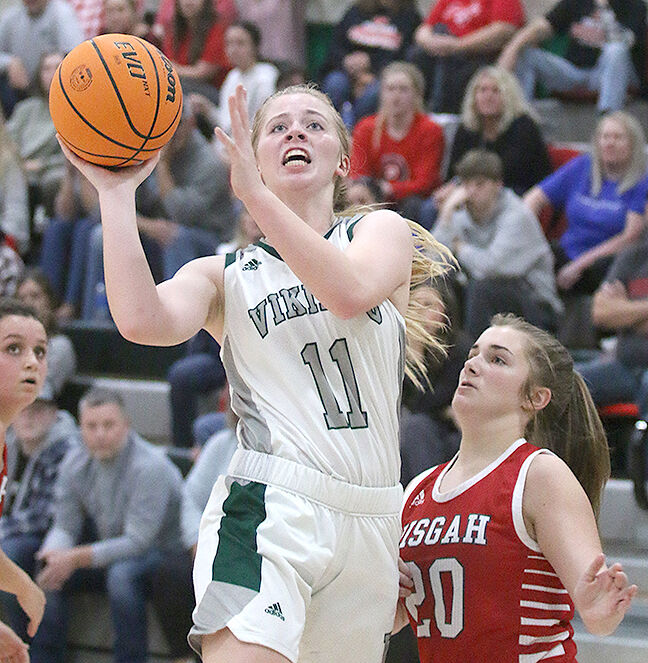 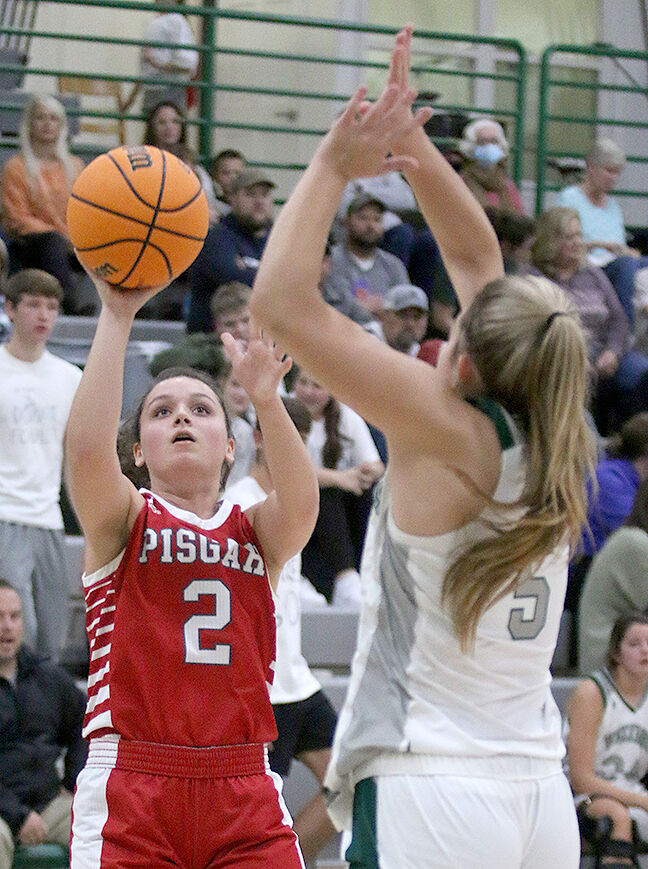 All throughout the Skyline varsity girls basketball program’s recent run of success, Pisgah has been a thorn in the Vikings’ side.

After several near misses in close contests through the years, Skyline didn’t miss in their first shot in the 2021-22 season at their old nemesis.

It was Skyline’s first win against the Eagles since a semifinal game in the 2015 Jackson County Tournament.

“I knew we could play with them if we didn’t turn the ball over and found a way to score some points, because I knew these girls were going to guard,” said Skyline coach Ronnie McCarver. “We started turning ball over early, but we’re actually growing up a lit bit, because they settled down and started doing the things we needed to do.

“I’m tickled for the girls. Good win for them.”

Skyline (2-3) fell behind 17-2 late in the first quarter but battled its way back into the game by changing the pace of play. The Vikings took a 23-22 halftime lead after Blakely Stucky banked in a 3-pointer for Skyline’s first lead with 43 seconds left in the second quarter.

Pisgah (4-1) led 34-33 going to the fourth quarter, but Skyline built a five-point lead midway through the frame following Kaina King’s layup and four straight points from Kenzie Manning. Pisgah ultimately went in front 45-44 on Kallie Tinker’s 3-pointer with 2:45 remaining, but four free throws from King put the Vikings up 47-44 with 1:39 remaining in regulation. Tinker’s trey a minute later tied the game at 47-all, and after Skyline missed the front end of a go-ahead 1-and-1 free-throw opportunity, Pisgah committed a turnover on its ensuing possession and the game went to overtime.

Free throws from Stucky put Skyline up 51-49 with under a minute remaining before Gracie Rowell sank a pair of free throws following a Pisgah turnover for a 53-49 Skyline lead with 27.8 seconds left to play.

Molly Heard converted a three-point play on the Eagles’ ensuing possession to cut Skyline’s lead to 53-52 with 17.2 seconds left, but Pisgah had a defensive player fall down and the Eagles were unable to foul Skyline until only 4.4 seconds remained. After Rowell sank both shots to give the Vikings a 55-52 lead, Skyline was whistled for a foul on Heard’s 3-point shot as time expired. Heard made the first free throw but missed the second, sparking a Skyline celebration.

Rowell finished with 13 points while King scored 11 and Stucky had 10 for Skyline, which also got nine from Lexie Stucky, eight from Brinlee Potts and four from Manning.

Heard, who eclipsed the 2,000 career point mark during the game, finished with 27 points while Tinker added 15 for Pisgah, which had no other player score more than three points.

“We just got out-executed, got out-played, out-coached, out-shot, out-everything,” said Pisgah coach Carey Ellison. “We knew we were going to get a really good shot and a really good game plan from them. We couldn’t stay in our game plan. The game got way too slow from the second quarter on. We never could get it sped up, and again that’s execution, that’s (Skyline) doing a good job of not getting out of their game plan.”