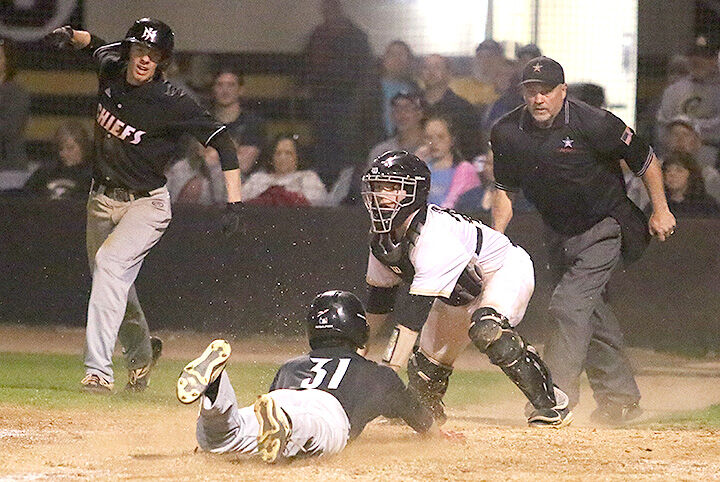 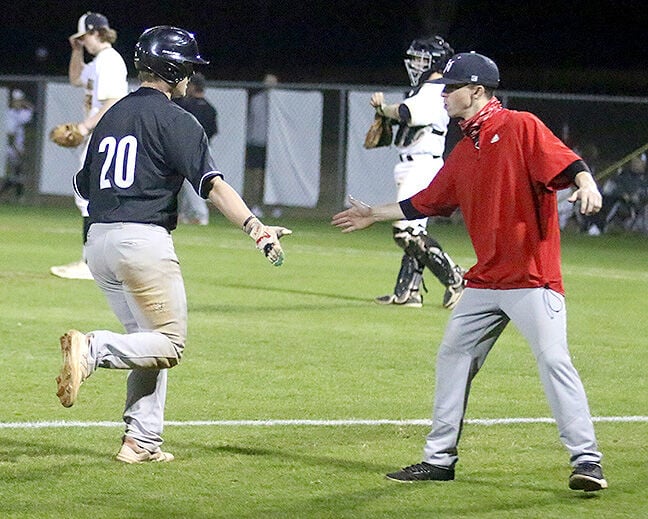 Brandon Poole (20) is congratulated by third-base coach Rahley Hessey after homering during North Jackson's 9-8 win at Scottsboro on Thursday. 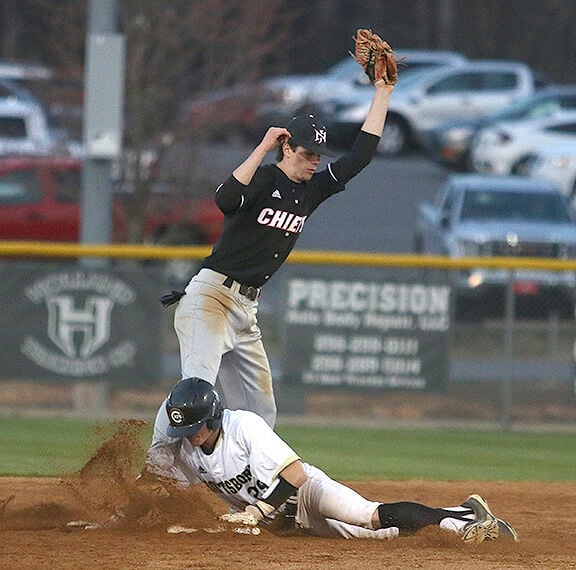 Scottsboro's Gavin McCrary slides in safely at second with a stolen base before North Jackson's Dalton Morris can apply the tag.

Brandon Poole (20) is congratulated by third-base coach Rahley Hessey after homering during North Jackson's 9-8 win at Scottsboro on Thursday.

Scottsboro's Gavin McCrary slides in safely at second with a stolen base before North Jackson's Dalton Morris can apply the tag.

North Jackson head baseball coach Cole Porter was not happy recently with the way his team responded when facing adversity against good teams.

So Porter challenged the Chiefs to get going when the going got tough.

“We’ve talked about, especially the last two weeks, is not flinching,” Porter said. “Recently we go play a good team and they hit us early, or we hit them early and they come back, and we don’t react like we should. So I said don’t flinch. The term, I stole it from someone, but don’t flinch.”

The Chiefs didn’t “flinch” when faced with a big deficit. Instead, they battled back from a four-run deficit and posted a 9-8, last-at-bat win on the road against archrival Scottsboro Thursday night.

“We didn’t flinch, even when we got down 5-1. We kept battling, kept competing, which was huge progress from what we’d been doing,” Porter said.

It was North Jackson’s (8-4) second win over the Wildcats in three days — the Chiefs edged Scottsboro 5-2 in Stevenson on Tuesday — and a series win that Porter said could have lasting impacts on the season.

“It does a lot for us. Anytime you can beat Scottsboro, it’s a good day,” Porter said. “If we hang in there and compete, we’ll have a chance at the end. This shows we can beat a very talented baseball team, a very well-coached baseball team, if we do that.”

Scottsboro head coach Jess Smith said Scottsboro, though it did not like the outcome, would benefit from the two games with its rival.

“It says a lot for (Jackson County) baseball to have to quality teams like that battling. It was a hard-fought game. Well played by both. We feel like we did everything we could to win the ball game. When you score in every inning, usually the baseball gods look down on you and you win. Tip of the cap to North Jackson. They did a lot with two strikes and two outs,” Smith said.

“I hate getting beat, hate getting beat by North Jackson. But if I can ever say I’m OK with getting beat in a game, it would be after that. I can look at every one of my guys and say they did what we asked them to do. I can look forward and be confident my team is scrappy and is going to fight. Both teams got better (from this series). I hate we’re on the losing end, but that was a good week of baseball.”

North Jackson took a 1-0 lead in the first inning on Brandon Poole’s RBI single, but Scottsboro (8-7) took a 2-1 advantage in the bottom of the first on Ethan Wininger’s RBI sacrifice fly and Connor McLaughlin’s RBI single.

But North Jackson, which had just three hits through four innings, scored five runs in the top of the fifth to take a 6-5 lead. Carson Smith and Poole singled to start the inning, and after Landon Barnes drew a walk, Matt Adams was hit by a pitch to force in a run. Luke Guess then blooped a two-run double just down the left-field line past third base to plate Poole and Barnes, and Caden Wynne followed with a two-run single to score Adams and Guess.

Scottsboro tied it 6-all in the bottom of the fifth when Landon Grider scored on Trey Cooper’s two-out RBI triple.

Poole put North Jackson back in front in the top of the sixth with a solo home run to left field, but again Scottsboro tied it when McCrary scored on Farr’s RBI groundout.

The first two North Jackson batters in the top of the seventh struck out, but the Chiefs rallied with two outs, getting a single from Dalton Morris, a walk from Nick Jernigan and a single from Macklin Guess to load the bases. Smith then delivered a two-run single to right field to give the Chiefs a 9-7 lead.

Scottsboro’s first two batters in the bottom of the seventh both struck out as well, but Grider drew a walk to keep the game alive for the Wildcats. Grider scored when North Jackson committed an error on Cooper’s grounder, and Collin Perkins reached after being hit by a pitch, putting the go-ahead runner on base. After a pitching change, Barnes got a pop-out to end the game and record the save.

Poole, who got the win on the mound after pitching four innings in relief, finished 4-for-5 with a home run, a double and two RBIs for North Jackson. Luke Guess went 2-for-3 with two RBIs and Smith was 2-for-5 with two RBIs while Macklin Guess, Wynne and Morris had one hit each and Jernigan drew a pair of walks.

“Our pitching staff has carried us the whole entire year. But tonight, they had a little slip up, and the hitters came through,” Porter said. “We kept putting at- bats together.”

Farr finished 2-for-3 with two RBIs and Cooper was 2-for-3 with one RBI for Scottsboro, which got one hit each from Perkins, McLaughlin, Camden Matthews and Sam Bryant and two walks from McCrary.

The pitching of Adams and Barnes helped the Chiefs post a 5-2 win in the series opener between the teams in Stevenson on Tuesday.

Adams got the win on the mound, pitching 5 1/3 innings and held Scottsboro to one run on three hits and one walk while recording 10 strikeouts.

“Adams threw a gem,” Porter said. “Curveball wasn’t working, but he’s got about three different speeds on the fastball and the change-up worked well. He did a fantastic job of competing the whole night and battled out of a couple of tight spots.”

North Jackson took a 1-0 lead in the bottom of the first when Macklin Guess singled and later scored on Poole’s RBI double. Wynne’s two-run single pushed the Chiefs in front 3-0 in the fourth, and Smith’s RBI single gave North Jackson a 4-0 lead after five innings.

Scottsboro pulled within 4-2 on RBI doubles from Matthews and Wininger in the top of the sixth, but Barnes, pitching in relief, pitched out of the jam and stranded the tying run in scoring position.

North Jackson got a one run back in the bottom of the sixth when Luke Guess tripled and scored on a wild pitch, and Barnes retired Scottsboro in order in the top of the seventh to end the game.

Morris finished 2-for-3 for the Chiefs while Smith and Poole (double) had one hit and on RBI each while Barnes, Macklin Guess and Luke Guess had one hit each.

Matthews finished 2-for-3 with an RBI double for Scottsboro while Wininger had one hit and one RBI and Farr, Perkins and McCrary had one hit each.

“We didn’t really play our (type of) baseball, offensively especially. We didn’t hit a single ground ball,” Jess Smith said. “Playing at North Jackson, a hostile environment and we let some of the pressure, some of the noise, get to us.”