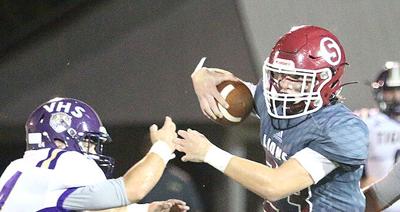 The Section football program hasn’t been to the playoffs since 2007.

“Our goal is to get to the playoffs,” Hammon said, “and trying to do that starts this week.”

Section (1-1) opens Class 2A Region 7 play Friday at 7 p.m. with a home game against the Tanner Rattlers. It is the last of a three-game homestand for the Lions.

Tanner was a perennial Class 2A state championship contender up until 2016 before turning going 3-7 in 2017 and posting consecutive 1-9 campaigns the last two years.

After falling to Limestone County rival Ardmore 42-18 in Week 0, the Rattlers snapped a six-game losing streak last week by handing Lexington its 11th straight defeat. Tanner trailed 13-12 entering the fourth quarter before getting the go-ahead score on Skylar Townsend’s 75-yard touchdown pass to Neaus Orr’s and preserving the win with a late goal-line stand.

Hammon said the Lions will need another strong defensive effort against a Tanner (1-1) team that is averaging 19 points per game.

“They are about 50-50 run-pass. They run a lot of stuff like Collinsville did, so that should help” that the Lions have seen that style of offense, Hammon said. “Defensively, facing the teams we’ve played, Collinsville and Valley Head, I think they’ve helped prepare us for (region play). Both of them had a real good quarterback/running back duos. We’ve got to do a little better on the edges with containment. (Tanner’s) quarterback is shifty and fast and so we’ve got to make sure we contain him.”

Section enters the game on the heels of a 19-14 victory over Hammon’s alma mater, Valley Head. The Lions rallied late in the fourth quarter to post the victory a week after falling 7-0 to a now 2-0 Collinsville team.

Hammon said last week’s victory and the fashion in which the Lions got it has boosted the team’s confidence heading into Friday’s important region matchup.

“I think that (win) was what our team needed,” Hammon said. “We overcame a lot of adversity during the game. Our kids just kept fighting and made some big plays at the end. It was big for our confidence and momentum going into the region.”