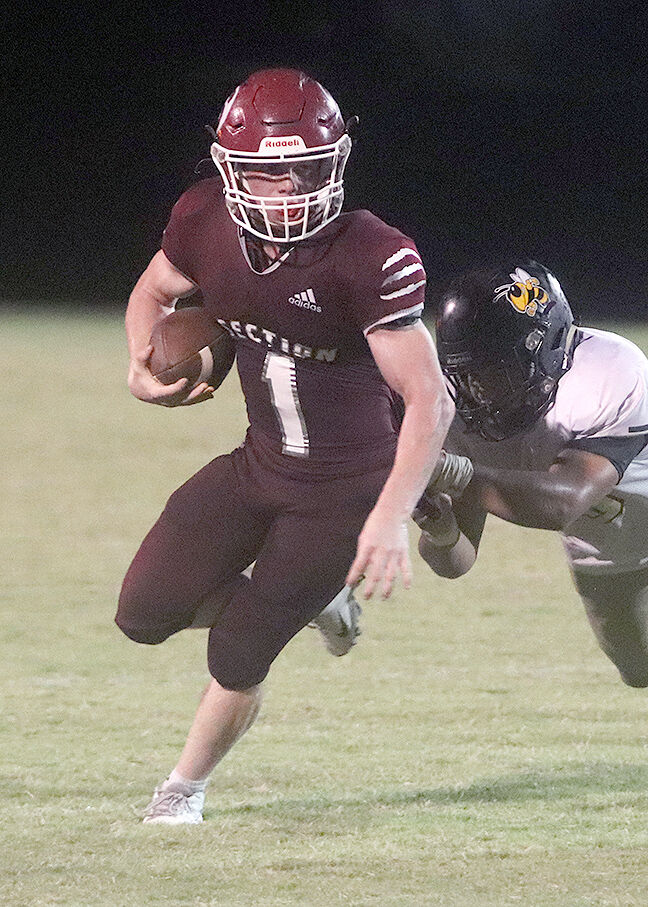 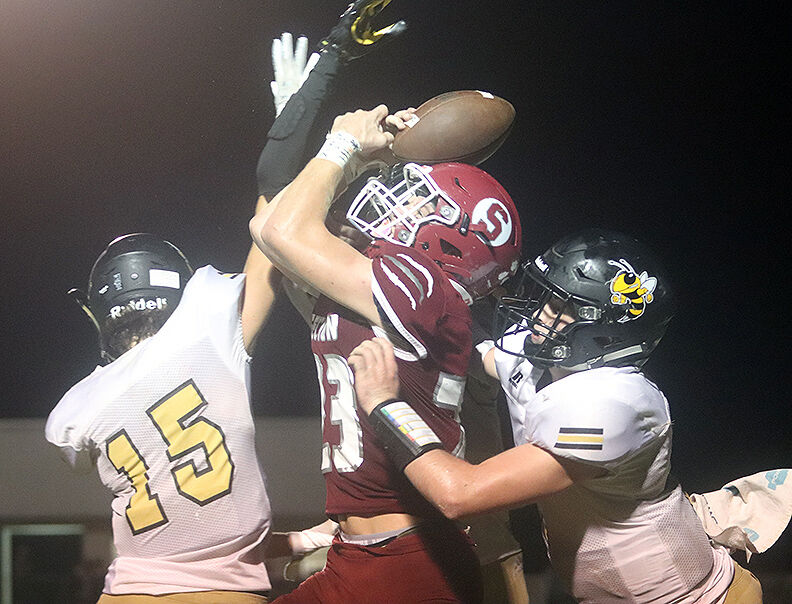 Section's Drake McCutchen goes up between three Ider defenders and tries to make a catch during a 41-40 Class 2A Region 7 loss Friday night at Section High School.

Section's Drake McCutchen goes up between three Ider defenders and tries to make a catch during a 41-40 Class 2A Region 7 loss Friday night at Section High School.

Visiting Ider edged the Lions 41-40 in a Class 2A Region 7 matchup at SHS, spoiling Section’s Homecoming while putting a dent in the Lions’ playoff hopes.

Section (2-3) fell to 0-3 in region play, losing all three games by one possession.

The game began with Ider (3-2, 2-1) scoring 14 straight points in the first two and a half minutes of the game on just four offensive plays, first scoring on a 53-yard run from Hunter Robinson and a 17-yard run from Benjamin Smith.

Section would score the next drive to put the game within eight after an 11-play drive capped off by a 4-yard run from Drake McCutchen.

In the second quarter, a blocked punt at the Section 18 set up Ider in the red zone to start their drive, ending in a 4-yard touchdown run from Matt Norman, putting Ider ahead 27-14.

With 43.8 seconds left in the half and down two scores, Section worked downfield with passes, largely utilizing the sidelines to put the ball in the end zone with 10.9 seconds left in the half. Section’s Jacob Cooper was a perfect 4-for-4 on the drive, finishing with a 4-yard touchdown to Dominik Blair to give Section a key touchdown to make the score 27-20 with Section receiving the second half kickoff.

In the second half, both teams traded touchdowns, combining for 21 points and bringing a 34-34 tie into the fourth quarter.

Ider started the fourth quarter with the ball on the Section 35, driving down all the way to the 5-yard line, where a high snap set up Ider for a second-and-goal from the Section 15. The very next play, Robinson took a handoff to the left side before cutting back to the right and outrunning the Section defense on a 15-yard touchdown to put Ider ahead 41-34 with just under eight minutes to go.

After both Section and Ider traded fumbles on the following drives, Section had 5:47 to drive 59 yards to tie the game. In a 10-play drive where Section had to convert two third and 11, one of which became a fourth and two which Section would also convert, the Lions would score a touchdown on a 7-yard touchdown on a run by Jr. Walker. With the score at 41-40, the Lions rolled the dice and went for the win. Blair took the snap on the two-point conversion and threw a pass into the left back corner of the end zone. With Cooper waiting in the back corner, he fought off the defensive back and hauled in the contested two-pointer to give Section the lead with just a minute and a half to go in the game. However, Section was called for offensive pass interference. Score back to 41-40, pushing the Lions back to the 18-yard line, making a potential PAT a tall task for Blair. Section would again try for the two-pointer, with the next pass being intercepted by Ider to keep the score 41-40. Ider recovered the Lions’ onside kick and ran out the clock.

“[The gameplan was to] do what we do, execute. We thought we could throw the ball some and we did, we had success running and everything, it really boils down to executing and that’s what we focus on,” Section head coach Chris Hammon said.

With only three region games remaining for the Lions, the best they can hope for is a 3-3 region record to try and return to the playoffs. Section will have their bye week next week before headed to Falkville Oct. 1.