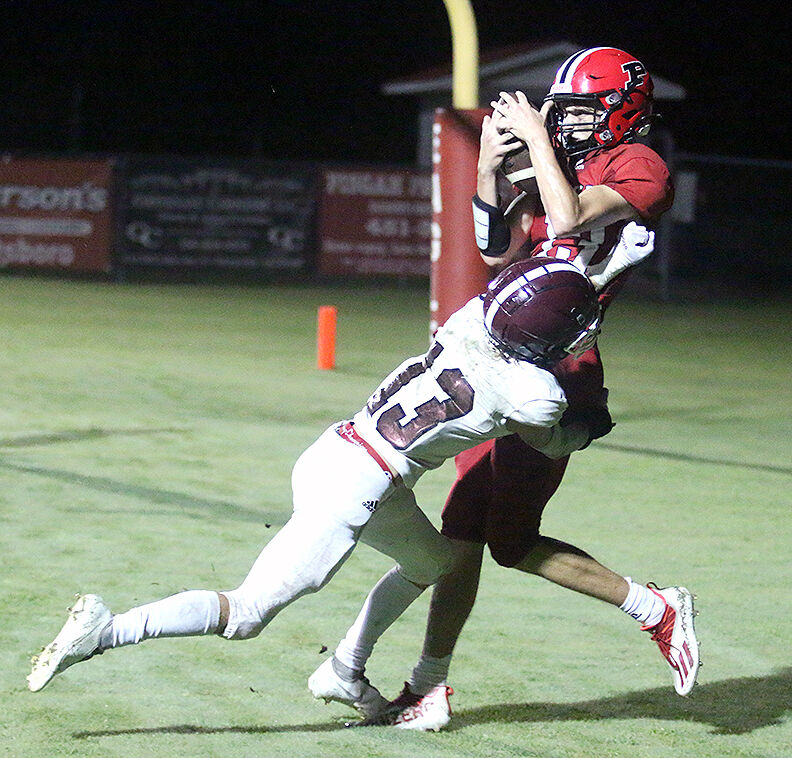 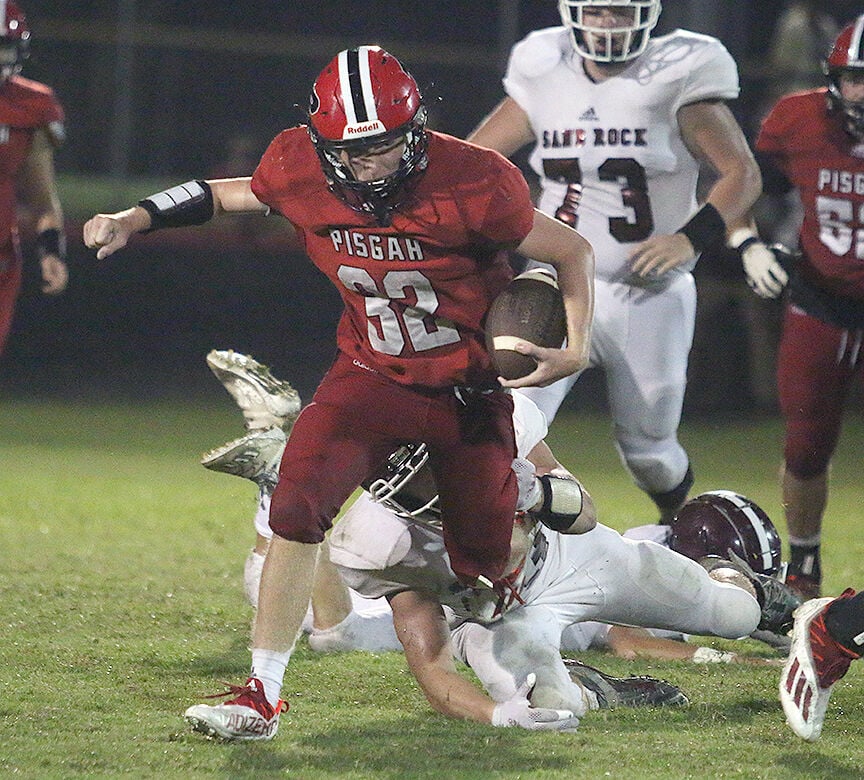 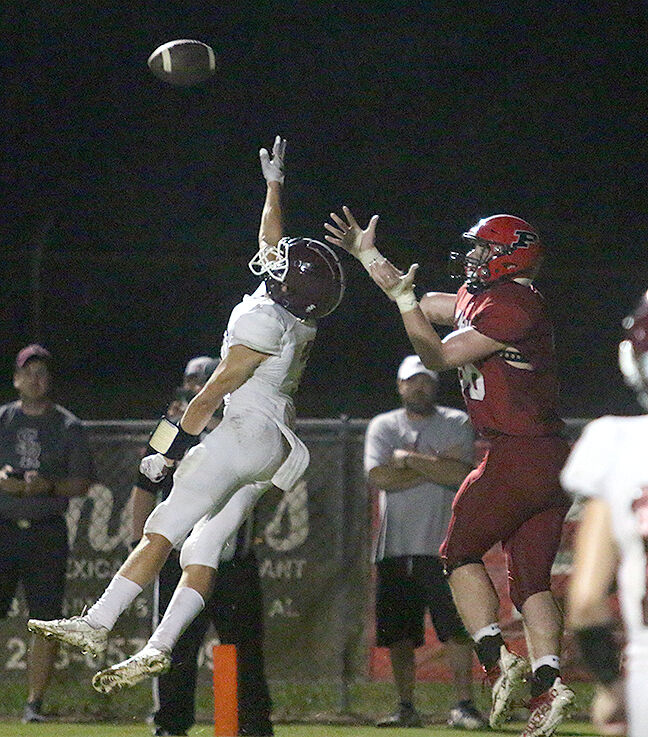 Rhyan Barrett (right) catches a pass for a two-point conversion that put Pisgah in front 42-40 with 1:29 remaining against Sand Rock Friday night. 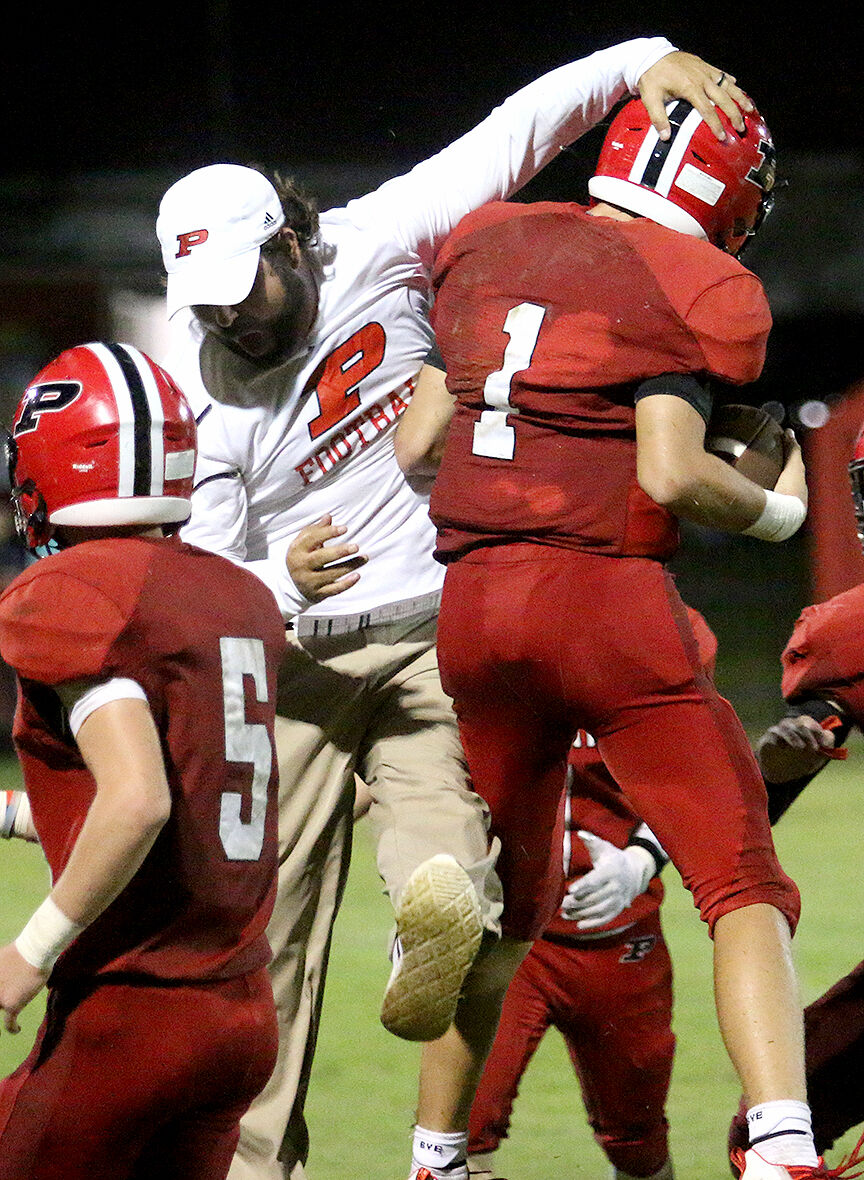 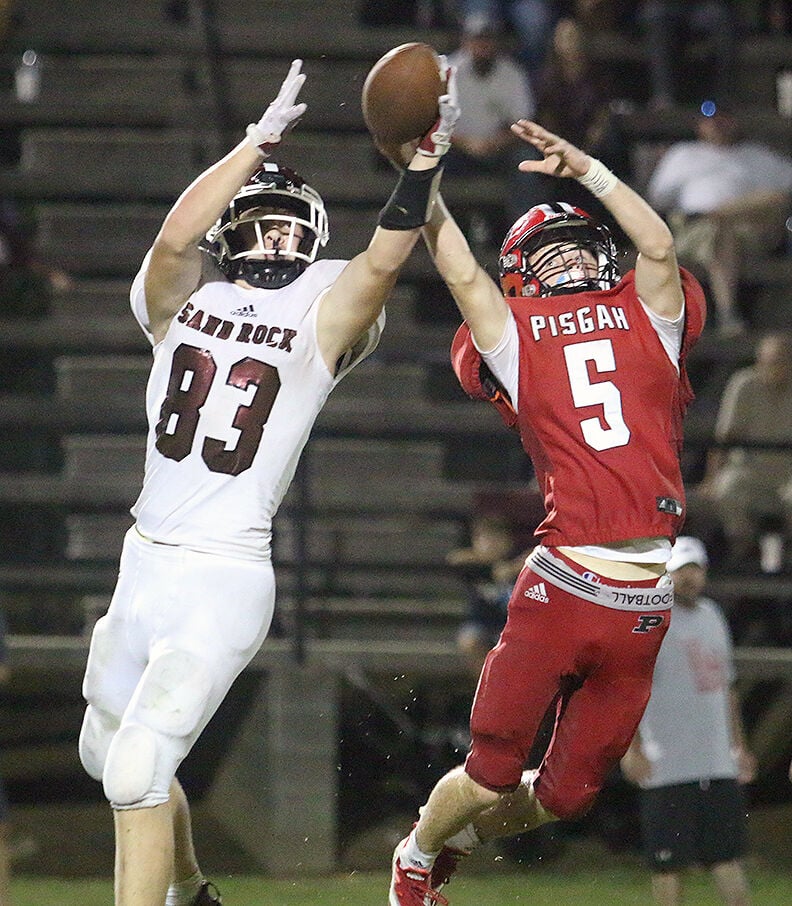 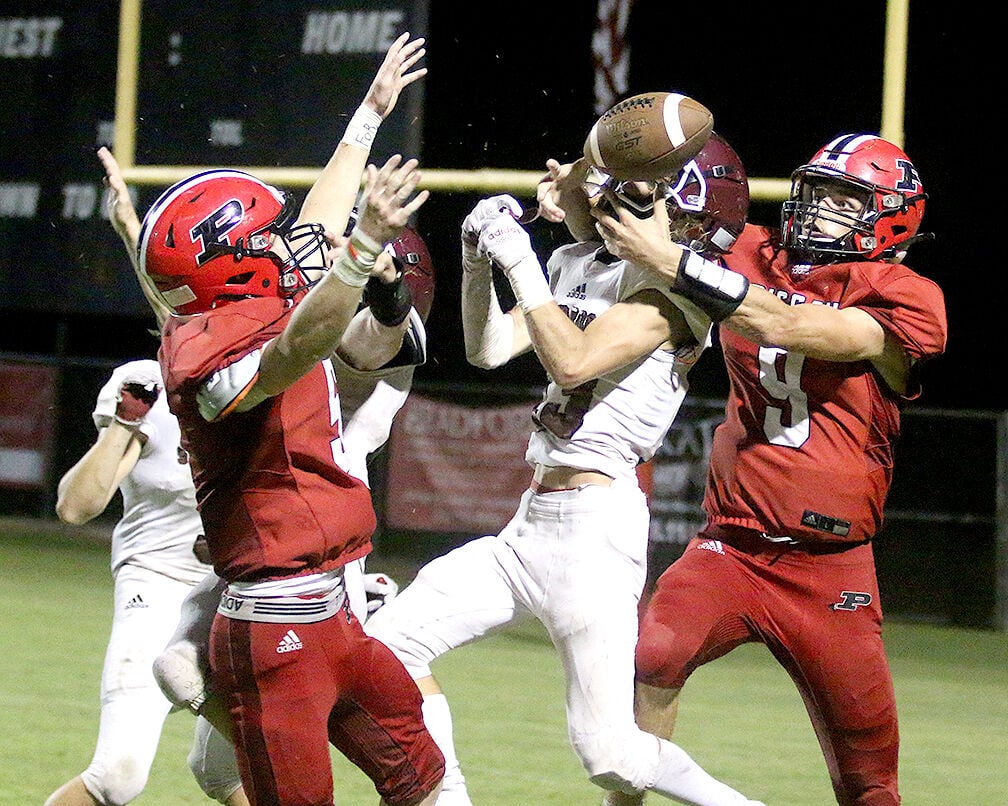 Rhyan Barrett (right) catches a pass for a two-point conversion that put Pisgah in front 42-40 with 1:29 remaining against Sand Rock Friday night.

In a back-and-forth game featuring two lead changes in the final minute and a half, the visiting Sand Rock Wildcats rallied in the closing seconds to defeat the Eagles 48-42 Friday night at PHS.

The game started with Pisgah senior Parker Law returning the opening kickoff for a touchdown. Sand Rock (1-0) would then score 20 straight points to end the first quarter. Pisgah managed to even the score in the second quarter before Sand Rock scored another 12 points straight to take a 32-20 lead into halftime.

“The effort is there, [we have] correctable mistakes that we have to correct, [we have to correct] the things we see on film, there will be plenty there. We did some good things, we did some bad things, our kids’ effort, we can build on that, so that’s something there,” Pisgah head coach Luke Pruitt said.

The second half started with Sand Rock losing a fumble and Pisgah turning that turnover into points, with freshman Legion McCrary scoring a 3-yard touchdown to put the game within six. Sand Rock would put themselves up 14 near the end of the third quarter on a 17-yard run from junior Trace Haygood.

In the fourth quarter, Pisgah scored a touchdown on Holcomb’s touchdown pass and two-point conversion pass to Jake Hendricks.

On the ensuing kickoff, Pisgah freshman Luke Gilbert recovered an onside pooch kick to give Pisgah (0-1) the ball back on the Sand Rock 42-yard line. Sand Rock would recover a fumble three plays later but punt the ball back to the Eagles. Pisgah then drove 64 yards to score the game tying touchdown with 1:29 to go in the game on McCrary’s short touchdown run. On the two-point conversion, sophomore quarterback Mason Holcomb found senior Rhyan Barrett on a pass to take a 42-40 lead.

After a kick return set up Sand Rock at their own 39-yard line, the Wildcats had 1:18 to either score a touchdown or kick a game-winning field goal. Utilizing the sidelines, the Wildcats managed to pick up yardage in a hurry before scoring on a 10-yard pass from junior quarterback Ace Ashley to junior Logan Crider for a touchdown with 27.9 seconds left. Haygood would run in the two-point conversion, leaving Pisgah with less than half a minute to tie the game, down 48-42.

Law got a good kick return to set up Pisgah past midfield with 20.8 seconds left. As Holcomb kept trying to hit a deep pass, just barely missing on a couple of them, the clock kept running down. Finally, on fourth down, with 1.9 seconds remaining, Pisgah had to throw up a prayer to try and tie the game again. Their prayer went unanswered, as the pass would fall short of the end zone, being batted away from a couple Sand Rock defenders. After the play, the Wildcats bench exploded, celebrating a wild win to open their 2021 season.

“That was a wild one. Hats off to Coach Pruitt and Pisgah. Good lord, they played their tails off, they seemed to have the right answer for everything we were doing. We made a whole lot of mistakes tonight, we turned over the football two or three times, special teams made mistakes, we did not play fundamental football. We are blessed, lucky somethings to get out of here with a win,” Sand Rock head coach Alan Heath said.