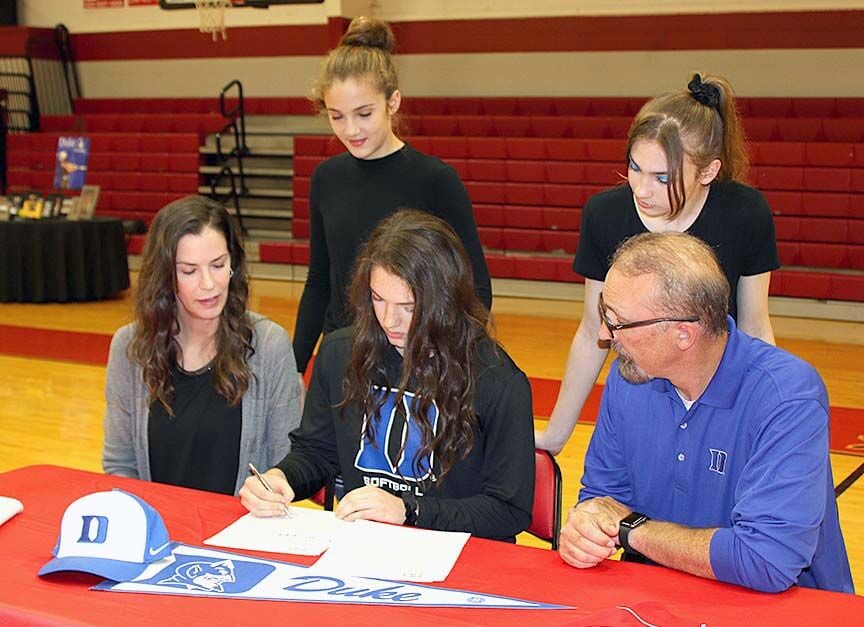 The Pisgah senior officially became a Blue Devil on Wednesday when she signed her letter of intent with the Duke University softball program on the opening day of the NCAA’s fall/winter signing period.

Barron, who committed to Duke prior to the start of her sophomore season, said she never wavered from that decision.

Barron drew interest from the likes of Boston College, Arizona, Mississippi State, Auburn and South Carolina but knew Duke was the right fit all along, she said.

“When I walked on campus, (Duke) felt like home. I knew it was right.”

Barron, a soon-to-be six-year varsity player and a three-time all-state selection, adds to the Pisgah softball program’s long list of college signees. She is however just the seventh Pisgah player to sign with an NCAA Division I school.

“To sign at Duke from Pisgah, Alabama, that is a really big deal,” said Pisgah softball coach Billy Duncan. “That was her dream school. I couldn’t be any prouder.”

Barron has made plenty of plays for Pisgah during her high school career, helping the Eagles win two Class 3A state championships — she was the 2017 state tournament MVP — and possibly a third had the 2020 season not be halted early because of the COVID-19 (coronavirus) pandemic.

“She’s as devoted to the game as any player I’ve ever coached,” Duncan said. “She loves the game of softball. When you watch her play you can tell how much she loves it. She’s put the time and effort in on and off the field. She just outworks most kids.”

Barron said Duke intends to use her as a pitcher/utility player. Barron has played numerous positions for Pisgah in the infield and outfield when not pitching.

“She’s great in the circle. I think she’s even better in the (batter’s) box,” Duncan said. “She hits for average, hits for power, doesn’t strike out. She’s got good speed, got a good glove, has a great arm, whether (pitching) or in the infield or the outfield. She’s just versatile. She’s just a great player. She competes from the first pitch to the last pitch.”

Barron, who is undecided on a major but is leaning toward something in the Business/Finance field, said she first dreamed of playing softball collegiately at the age of 10.

“It was something I thought about a long time,” Barron said of signing. “And still, after all those years of looking forward to it, it’s passed my expectations.”

Barron said she looks forward to the challenges of playing softball at the college level and in the highly-competitive ACC.

“It’ll definitely be a challenge, but I’m eager to learn how to compete on a bigger roster,” Barron said. “I think it’ll be amazing. I’ve already met some of my teammates, played together in travel (ball). They’re great people. I think it’ll be a really good time. I’m looking forward to making some great memories.”

Before moving on to Duke, Barron hopes to make a few more memories at Pisgah. She also plays basketball for the Eagles, having picked up three state title rings in that sport. Barron wants to add a few more rings to her collection before leaving PHS.

“I want to win another softball and basketball state championship,” Barron said, “and have a blast doing it.”