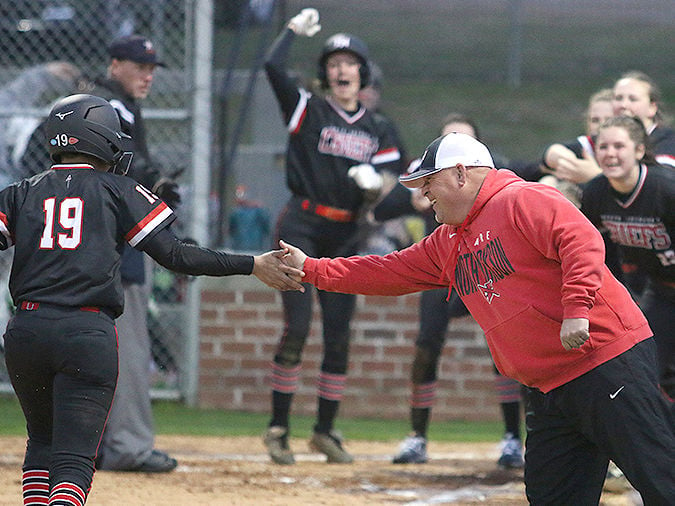 Ja’Khia Hutchins is congratulated after hitting a two-run home run by coach Kevin Thompson as her teammates celebrate at home plate during North Jackson’s 8-6 win over Scottsboro. 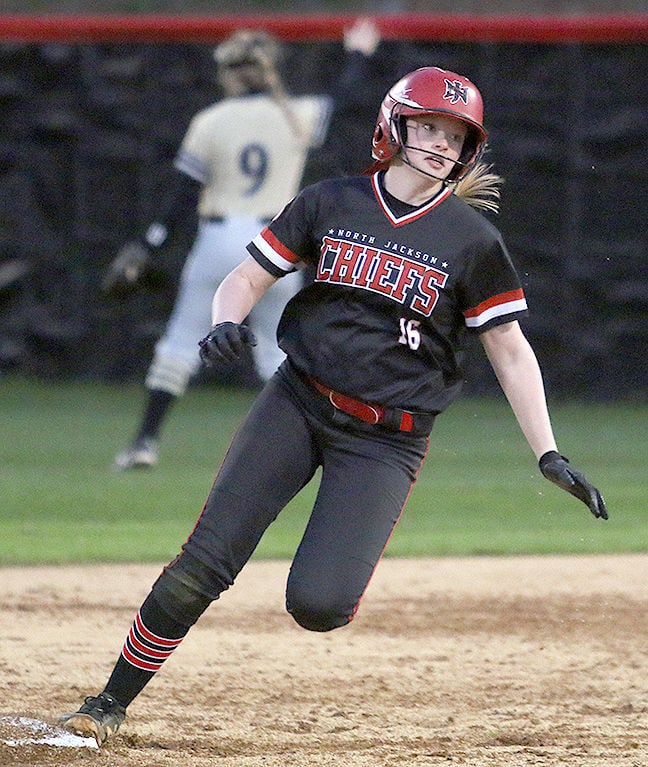 Hadley Burnette rounds second base during her inside-the-park home run during North Jackson's 8-6 win over Scottsboro. 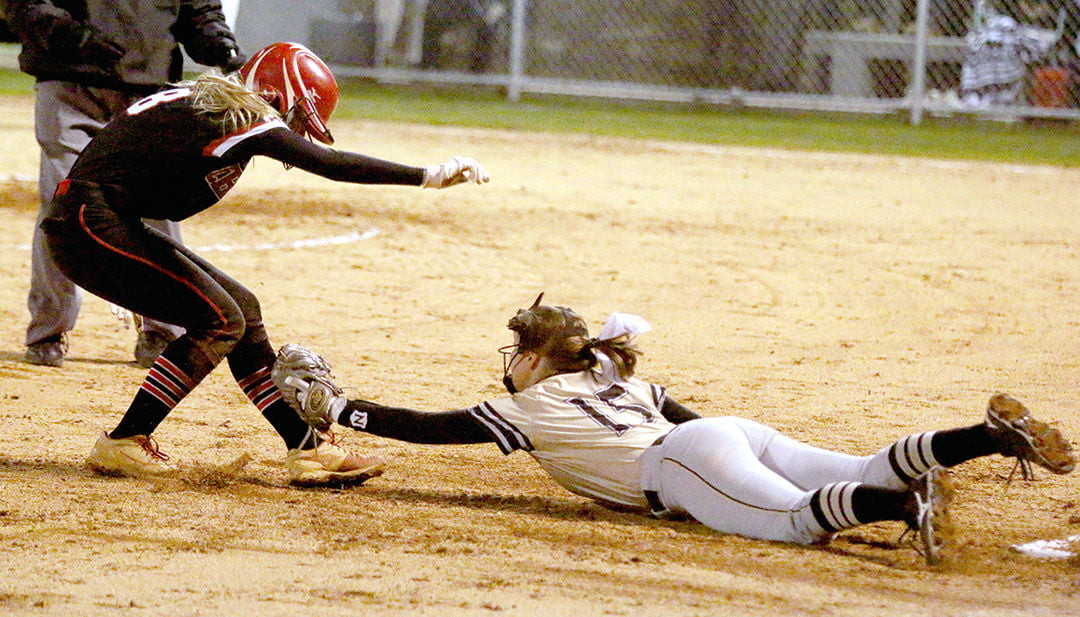 Scottsboro's Audrey Holland steals second base as the throw down to the bag slips past North Jackson's Jocelyn Paschal.

Ja’Khia Hutchins is congratulated after hitting a two-run home run by coach Kevin Thompson as her teammates celebrate at home plate during North Jackson’s 8-6 win over Scottsboro.

Hadley Burnette rounds second base during her inside-the-park home run during North Jackson's 8-6 win over Scottsboro.

Scottsboro's Audrey Holland steals second base as the throw down to the bag slips past North Jackson's Jocelyn Paschal.

Round 1 of the softball version of the Battle of the Valley during the 2020 season went to North Jackson.

The Chiefs built an early lead and then took advantage of a few Scottsboro errors to take charge before holding off the Wildcats for an 8-6 win Thursday night at Stevenson Park.

“It’s good to play good competition this time of year, get to see where you are and how much work you’ve got to do,” said North Jackson coach Kevin Thompson. “Anytime you play a rivalry game, you expect anything and everything. Scottsboro’s always got a good team, coached well, always scrappy. I knew when we went up a couple of runs that wasn’t going to be the end of it. Credit to our girls, because when Scottsboro made that surge back, we didn’t let up. I’m pleased with the win.”

Scottsboro coach Robyn Johnson said the Wildcats’ defensive effort was as tough to take as the final score.

“We made eight errors — eight,” Johnson said. “We out-hit (North Jackson) 11-7, but we made eight errors. Can’t win like that. Just our second game. I’ll blame it on lack of reps, maybe. I hope that’s what it is. It was kind of like when it rains, it pours. It just snowballed on us.”

Two first-inning errors helped North Jackson take a 1-0 lead — Destry Lambert reached on a two-out error and scored when Charley Smith reached on another Scottsboro error — before moving in front 2-0 in the second when Makenna Jones walked and scored on a Scottsboro throwing error.

But North Jackson went back in front in the bottom of the fourth. Jones walked and later scored when Avery Wynne’s fly ball was dropped in the outfield. Wynne’s courtesy runner, Sarah Morgan, then scored when Chloe Chisenall reached on a two-out Scottsboro throwing error. The next two North Jackson batters, Ja’Khia Hutchins and Hadley Burnette, hit back-to-back home runs to push the Chiefs in front 7-2. Hutchins’ homer was a two-run shot while Burnette’s was an inside-the-park home run that she placed perfectly down the right-field line.

“That was a big momentum swing,” Thompson said. “We capitalized on a couple of errors. That’s what you’ve got to do.”

The Wildcats pulled within 8-6 in the top of the seventh on Smart’s two-run single, but Arielle Haynes retired the next two Scottsboro batters to record the save and preserve the win in the circle for Burnette, who pitched six innings and record six strikeouts.

Hutchins finished 2-for-4 with two RBIs for North Jackson while Burnette, Lambert, Smith, Wynne and Mikaela Barnes had one hit each.

Smart finished 3-for-4 with three RBIs while Bennett, Holland (RBI) and Lee all went 2-for-4 for Scottsboro.

The teams' were scheduled to play at Scottsboro on Monday, but that game was rained out. A makeup date for the game has not yet been rescheduled.