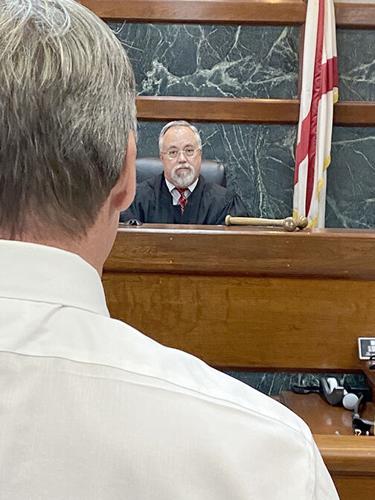 It’s 10 a.m. Friday in a courtroom on the second floor of the Jackson County Courthouse. There is a laughter here, an easy feeling as the judge sits behind the bench.

One by one, each person here steps to a podium, directly facing the judge, who long ago questioned this but has since called it his calling.

The judge tells the group to be the best they can be.

A woman steps forward. Becky tells the judge she has been clean of drugs for seven months now. Becky has just returned from a rehab clinic. She’s happy today, removed from the thoughts of suicide some time back.

“Thank you Judge for letting me go,” she said.

There’s emotion here, some crying. Lives change here for the better. The judge has often been quoted as saying, “our job is to fix people, not fill prisons.”

Each person here today will stand in front of the judge and let him know how they are doing. They will tell him how many days they have been clean. And each time, there is a round of applause.

“Until we meet again,” the Judge said as he closes today’s session.

Drug court came to Jackson County in 2007 when then-Chief Justice Sue Bell Cobb asked Circuit Judge John Graham to start it. At that time, Graham had plenty of questions and concerns about the program.

“I just didn’t understand,” he said. “I questioned if social work’s place was in the court. I wasn’t sure it was best for the county and the court system.”

“Drug courts save lives, families and tax dollars,” said Cobb. “To accomplish these things requires a dedicated judge and drug court team. Jackson County is blessed to have both. Considering the Jackson County Drug Court is about to celebrate its 15th year, it is impossible to quantify the enormous amount of good that these court officials have accomplished during those 15 years.”

This year, Tivoli Justice will graduate. She has come a long way from her first day. Justice said she had to start over three times.

“I had nothing,” she remembered. “Now I have my own place, a good job and relationships with my kids.”

Stephanie Blizzard, who will also graduate, remembers the first six months being the hardest. She didn’t know if she would make it, but she fought through.

“I got my family back,” said Blizzard.

The program, as Graham says, is a big incentive for someone to get their life straight.

Each Friday, participants stand before Graham.

“It’s important for them to stand up and talk,” Graham said. “Standing up, they have to take responsibility. I want to hear the good and the bad.”

Wendy Trott has served as Graham’s drug court coordinator since 2011.

“The only break Wendy takes is when she sleeps, I think,” said Blizzard.

Drug court is not easy and not for everyone. Drug court gives addicts the tools needed to become sober, law-abiding citizens. There are five phases of drug court.

Phase 3 is three months long and participants attend IOP one hour every week and court status hearings once each month.

Phase 4 is the “senior class” of drug court participants, and they are not required to attend IOP classes, but they may if they choose. They are subject to color code drug testing and they attend court status hearings every other month.

Phase 5 are people who have completed drug court, but who have not yet graduated. They are not required to attend IOP. They attend court status hearings every other month and remain subject to random drug testing as well as color code.

“Everyone has been touched by addiction in some form or some way,” said Trott. “I take it personally if a participant relapses or gets discharged. In fact, it really breaks my heart and I think ‘what could I have done differently?’ But for those that do succeed, it is amazing. It makes this job worth all the heartaches and tears.”

Trott said with 20 graduates this year set to graduate Nov. 22 in a ceremony at First Baptist Church in Scottsboro at 6 p.m., the drug court program will have saved state taxpayers a total of $603,272 in taxes for one year.

“The main goal is to get their lives back and get clean,” he said. “Right now, we have two or three participants who had no visitation with their children. Now they have their kids back. Drug court saves lives, saves taxpayer money and pays for itself.”

Graham said drug court can help people restore full citizenship with all its responsibilities and privileges such as holding a job, living independently, driving legal (tags, insurance and drivers license), raising their children and paying child support, giving back to the community, resolving all their other legal obligations, attending church if they wish and more.

Since the first graduating class in 2009, the program has an 85 percent success rate.

Jackson County’s drug court program gives back to the community. Each year the participants plant vegetables in their Garden of Hope, which they begin on Good Friday.

Also, the Freedom Festival is held during Independence Day holiday weekend. Each year hundreds of people attend for free food and more.

“All our participants are involved in this grand event,” said Graham. “It is hosted by our drug court participants and organized by them from donations they seek in the community. The participants take great pride in this event because it allows them to give back to the community and to show the accomplishments they have made.”

Graham said no tax dollars are spent on the event.

The first graduating class was in 2009. At that time, one man said the program saved his life and kept him out of prison for 15-20 years.

An older man, who was graduating, said he had done drugs and alcohol most of his life. With the program’s help, he planned on dying sober.

“Drug court works,” said Graham. “We are fighting the drug epidemic in our community by helping people change their lives in a good way and getting their lives back. We help them get jobs, establish a clean living environment, become tax-paying, law-abiding citizens, get their driver licenses, regain visitation and/or custody of their children and, most importantly, teach them to live a happy and healthy drug-free life.”

As each person comes before Graham each Friday morning, the conversation ends the same.