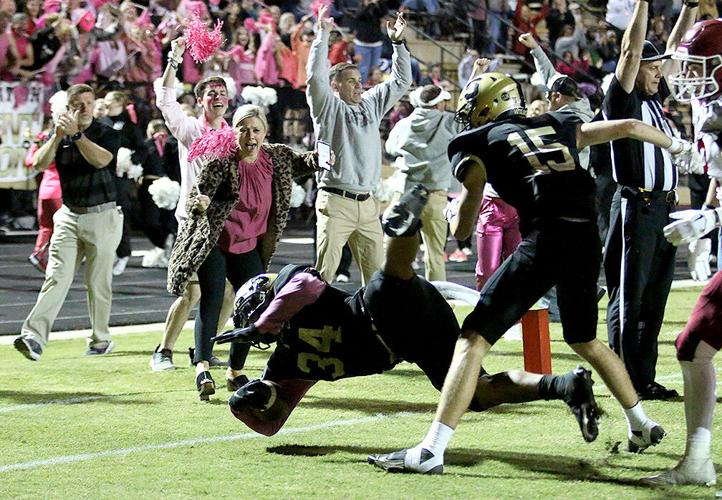 Keelan Alvarez scores a fourth-quarter touchdown as people on the Scottsboro sideline celebrate during Scottsboro's 17-14 win Thursday night over Class 5A No. 3-ranked Guntersville. 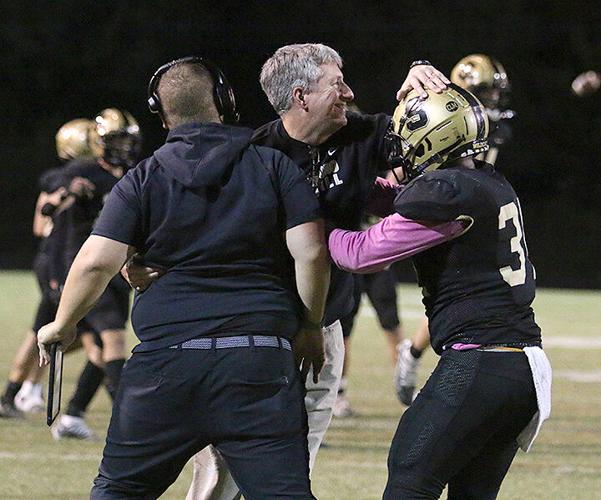 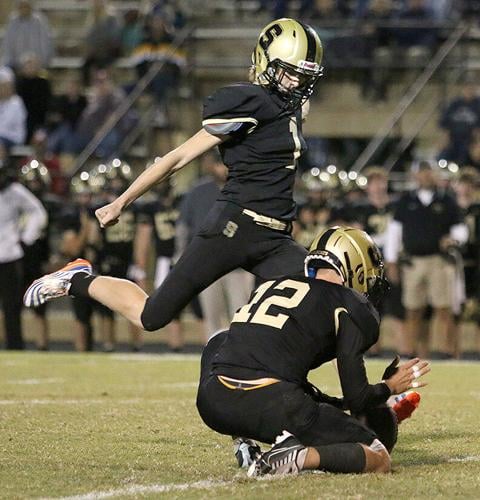 Cole Raeuchle boots a 20-yard field goal out of the hold of Trey Cooper on the last play of the first half during Scottsboro's 17-14 win Thursday night over Class 5A No. 3-ranked Guntersville. 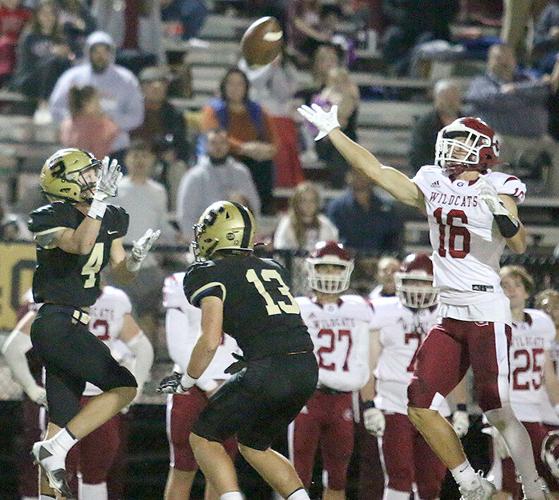 Reed Potter intercepts a Guntersville pass near midfield on the final play of Scottsboro's 17-14 win Thursday night over Class 5A No. 3-ranked Guntersville. 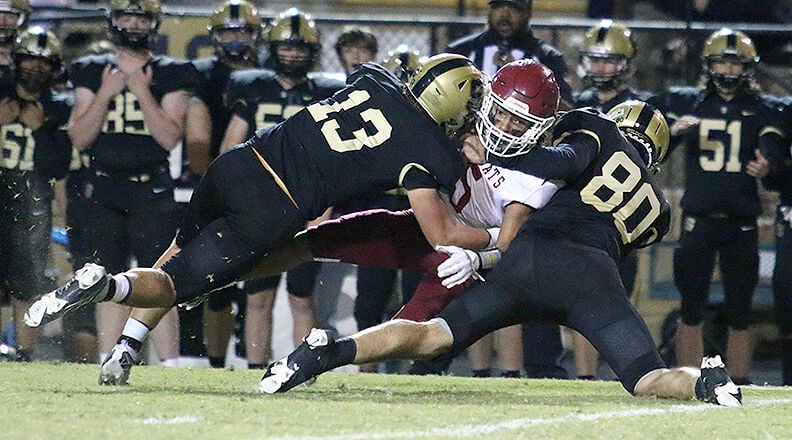 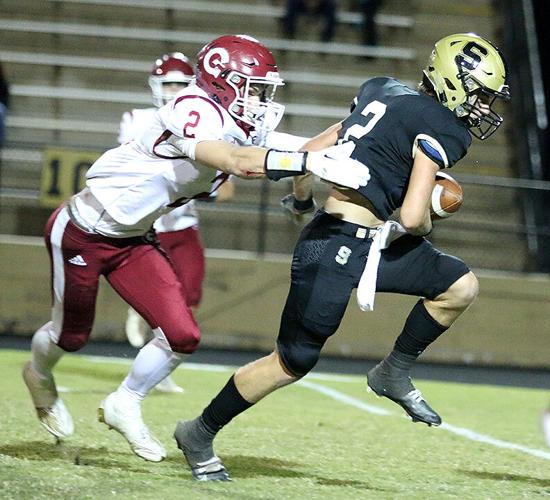 Thomas Stewart tries to escape a Guntersville defender after catching a pass in the closing seconds of the first half that set up a Scottsboro field goal on the last play of the second quarter during Scottsboro's 17-14 win over Class 5A No. 3-ranked Guntersville. 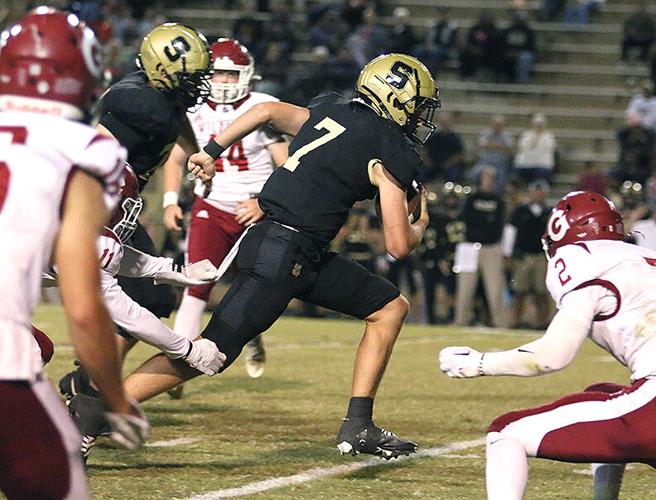 Jake Jones runs through the Guntersville defense for a second-quarter touchdown during Scottsboro's 17-14 win over Class 5A No. 3-ranked Guntersville Thursday night at Trammell Stadium.

Scottsboro players celebrate with members of the student section following their 17-14 win over Class 5A No. 3-ranked Guntersville Thursday night at Trammell Stadium.

Scottsboro head football coach Cris Bell said he had a “feeling” that his team was about to do something special against Class 5A No. 3-ranked Guntersville.

Bell’s “feeling” proved accurate as the Wildcats upset visiting Guntersville 17-14 Thursday night at Trammell Stadium, building a 10-0 halftime lead before holding off previously undefeated Guntersville in the second half to win the 87th meeting between the teams.

It was the Wildcats’ first win against a ranked opponent in six years and moved Scottsboro (3-3, 2-1) back into the region championship and playoff-game hosting contention.

“Got a feeling…we had a great week of practice. You see the kids starting to believe. Challenged them all week to just believe. Just have a mustard seed size of belief. Just so proud of these guys,” Bell said while choking back tears. “They just played their tails off. Nobody gave us a shot. As we told them, ‘it doesn’t matter, anybody outside our building doesn’t matter, it’s what we think.’ And they just did a phenomenal job.”

Guntersville (6-1, 3-1) entered the matchup as Class 5A’s second-highest scoring team, averaging 49 points per game. But the Scottsboro defense stifled the uptempo Guntersville offense from the start while holding them to their lowest point total since a 42-14 loss to Scottsboro in 2019. Guntersville, which lost starting quarterback Antonio Sprugeon to a foot injury on its third offensive possession, totaled just 175 rushing yards and 231 total yards while committing three turnovers.

“So proud of our defense. That’s (a Guntersville offense) that’s averaging 49 points a game and we hold them to 14…just a tremendous effort,” Bell said. “Them losing their quarterback was big. They had to rely on the run game, but here’s the thing, that’s where we’d been struggling defensively lately was in the run game. To battle like they did was impressive. We told them to ‘make (Guntersville) earn everything’ and we did.”

Scottsboro’s defense came up with two early turnovers, a fumble recovery by Landon Wright and an interception by Andrew Smith, the latter of which set up the Wildcats’ first score. On a fourth-down play, Jake Jones split the Guntersville defense for a 19-yard touchdown run, and Cole Raeuchle’s PAT gave Scottsboro a 7-0 lead midway through the second quarter.

The run-oriented Scottsboro offense then turned to the air, running its two-minute offense to get another score before halftime. The key play was Jones’ 26-yard pass to Thomas Stewart to the Guntersville 8-yard line. A dead ball facemark penalty on Guntersville stopped the clock with one second left, allowing Raeuchle to boot a 20-yard field goal for a 10-0 Scottsboro halftime lead.

“They ran the two-minute (offense) beautifully (at the end of the first half),” Bell said. “We practice that twice a week, well once this week because of the short week, but

when the guys are prepared and they know it, it brings out confidence. They ran it perfectly.”

Guntersville countered with its longest drive of the night, capping a 12-play, 68-yard drive with Street Smith’s 2-yard touchdown run and Brandon Russell’s two-point conversion pass to Eli Morrison with 4:20 left to play.

Scottsboro faced a fourth-and-1 near midfield on its ensuing offensive possession, but the Wildcats went to the hard count and got Guntersville to jump off side for a first down that extended the possession. Three first downs later, Scottsboro began to kneel the ball to run out the clock. But after a third-down kneel down that would end the game — Guntersville was out of timeouts — Scottsboro was called for an unsportsmanlike conduct penalty when its celebrating players left the bench with 19 seconds remaining on the clock. The dead ball penalty forced Scottsboro to punt, but Guntersville’s last ditch pass was intercepted by Scottsboro’s Reed Potter near midfield as time expired, restarting the Scottsboro celebration.

Six days after Scottsboro head football coach Cris Bell lamented the Wildcats letting what he called a program-turning win slip away last week against Class 4A No. 6-ranked Priceville, Bell said Scottsboro got that type of win Thursday night.

“I’ve told them all year, this group has got a chance to be really, really special,” he said. “We’ve got to build on it. We can’t get complacent. Now is where we’ve got to show some maturity. We’ve got to come back next week and got to get better. We need to finish this thing out. I’m so proud of them, so proud for the community.”

› Game stats courtesy of Greg Bell of WWIC Radio 1050 AM.